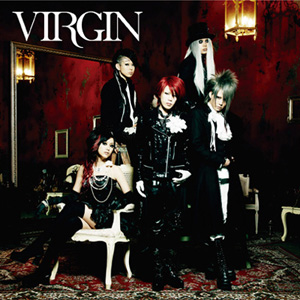 exist†trace’s new album VIRGIN is a mixed reward for fans. Taking its name from the band’s concept of their “virgin” full album with major-label Tokuma, exist†trace seems more determined than ever to assert their femininity in the male-dominated visual kei genre.

In their recent USA tour, the raw emotion of early songs like “Judea” and “Sacrifice Baby” got long-time fans excited, but there’s little evidence of that ferociousness in this current version of exist†trace. VIRGIN contains some excellent moments, but it’s clear the metamorphosis that began with TRUE (2011) and THE LAST DAYBREAK (2011) isn’t yet complete.

VIRGIN contains 5 songs from the aforementioned 2011 EPs, and the choice of returning tracks seems odd. Of course title tracks “TRUE” and “Daybreak’ make the cut, and "I feel you" (selected as 2012’s Nadeshiko Japan theme song) merits inclusion on pedigree alone, but I miss the strength of "Honnou" and the beauty of Omi's "Kimi no masshiro na hane."

The band has seen many complaints from hardcore fans after the release of the jazzy “Ginger” as VIRGIN’s lead PV. The confusion is understandable — for 3 releases in a row , exist†trace has devoted time to their playful side, and what started as novelty is becoming a source of concern. The waltz-driven “Kiss in the Dark” and fairy-tale “Little Mary…” make encore performances in VIRGIN, and while entertaining diversions, they’re considered B-side material by fans who want their favorite fire-breathing female VK band to let loose and wreak some havok.

Versatile, for sure, but it’s too much for this album and shifts VIRGIN just a little off balance.

Jyou has taken a multi-album break from her signature growls, but her dramatic performance range continues to evolve. Her MC challenge to boys and girls alike in “Honey” is unabashedly sexy, and the heart-rending desperation of “Anata” is especially moving.

“Wonderland” and “Honey” are the stand-out tracks from the new material, and I really wish one of these had been the lead PV for VIRGIN. Both tracks feature some outstanding guitar work, including miko’s bottleneck guitar solo on “Wonderland” and some cool parts in “Keiyaku” where miko uses an E-bow and layers a fast-forward/rewind effect. Omi rips loose with powerful solos in “Honey” and “Signal”.

“Daybreak” and “True” still shine in composition and performance, and they’re the best spots to pay attention to Naoto and Mally’s irreplaceable back line contributions. You can gather a few glimpses of their synchronicity in “Honey”, but the Mally/Naoto combo is one of the best in today’s J-Rock scene, and VIRGIN’s new material doesn’t highlight them nearly as much as they deserve.

Obvious puns aside, VIRGIN is not the album to give to an exist†trace first-timer. TWIN GATE (2010) remains the best entry point for new fans, with the explosive “RESONANCE” and the majestical “Cradle.”

exist†trace continues to show a lot of courage, even if it’s in the form of not giving fans what they want/expect. In America, we may take female rockers for granted, but in Japan they’re fighting an uphill battle on a daily basis. (Check the Oricon chart for a sobering report on females in Japan’s rock genre.) It would be much safer for them to release cookie-cutter, chord-heavy screamers, but there’s creativity and subtle experimentation in even the simplest songs on VIRGIN.

exist†trace only gets to be a VIRGIN one time. I hope they come back hungrier on their next release.