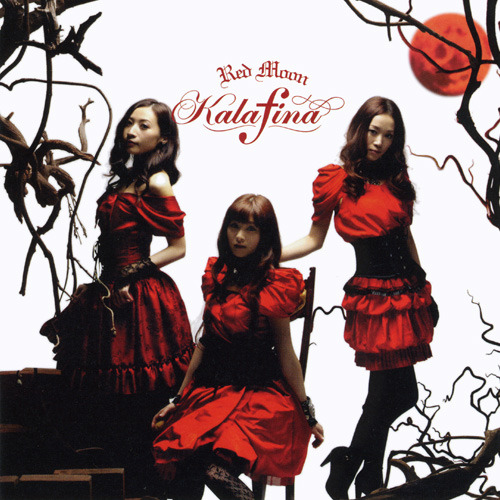 Listening to Kalafina’s 2010 album Red Moon is like riding a magic carpet. With international influences, the songs travel through different landscapes with the three vocalists as navigators. There’s also a mix of past and future with founder/composer Yuki Kajiura’s mastery of both classical instrumentals and techno beats.

The title track begins softly, but electric guitars and stringer crescendo until they explode with the chorus. Enter Kalafina’s signature three-part powerhouse vocals. The bells add another layer to the melody and make the song seem even more grandiose. In contrast, the next piece, “Hikari no Senritsu”, is whimsical and light. The jaunty flute provides the perfect partner for Hikaru’s more youthful voice. “Te to Te to Me to Me” combines the Indian sitar and tabla with Arabic rhythms and violin. It’s an adventurous move that highlights Keiko’s lower range, which the piece a mysterious sound.

Although Kalafina is just as well known for their electronic numbers, “fantasia” and “progressive” seem underwhelming compared to the rest of Red Moon. The inclusion of violin is unique for dance much but nothing new from either Kalafina or Yuki Kajiura’s other work. “Kyrie” is more interesting with the contrast of a techno beat and slow, legato vocals. Wakana gets to show off her ability to hit high notes, and the explosion of guitars at the end leaves a memorable impression.

The middle of the album is where the trio resumes traveling the world via music. “Yami no Uta” has an Eastern European feel while “Hoshi no Utai” is distinctly Japanese with the shakuhachi and the rumble of taiko drums. The energy gives the image of samurai charging into battle. The vocals stand out in being more grounded (but still powerful)—a nice change from the angelic choruses. “storia” returns to Europe with flute and chanting that gives the song a medieval touch.

To complement the epic opening, Red Moon concludes with a one-two punch of “Lacrimosa” and “I have a dream”. The former is a haunting piece backed by a full orchestra and chorus with Wakana displaying her wide vocal range again. The occasional strain in her voice is easy to ignore amidst her passionate delivery, and Hikaru and Keiko complement her well in the harmony. Coming down from that rush, “I have a dream” is a gentle ballad that brings the listener home after the wild magic carpet ride.