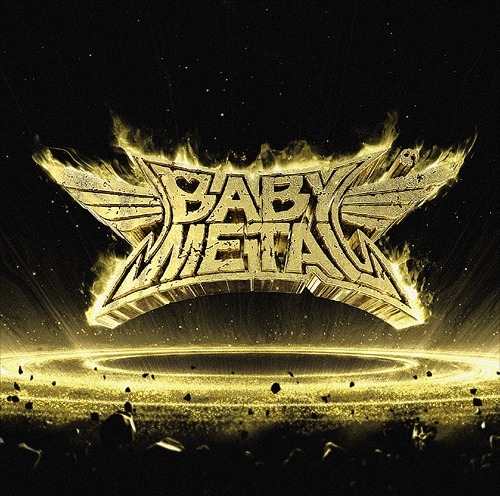 BABYMETAL’s METAL RESISTANCE, the follow-up to their 2014 cross-cultural smash BABYMETAL, raises the “epic” level x100. This is a new version of the BABYMETAL concept, bolstered by the validation of sold-out worldwide tours, magazine covers, numerous metal festivals, and high-profile photo ops with legendary rock music gods. (and yes, we have the POP! figures, too.) There’s a self-consciousness layered into the production elements on this album, an overt effort to satisfy the different types of fans who alternate between favoring the “kawaii” personality of the band and those who tolerate the cuteness just to enjoy the shredding.

BABYMETAL’s first album was culmination of years of expertly crafted statements about who BABYMETAL was — from “Doki Doki Morning” to “Headbangeeeeerrrrr!!!!!” to ‘Ijime, Dame, Zettai” — the focus of the vocal personalities was clearly and un-apologetically youthful and cute, perfectly balanced on top of fiercely dark heavy metal. METAL RESISTANCE betrays all the uncertainty of adolescence, a sophomore album that delivers greatness in spots but also wavers more than once under the weight of growing pains and experimentation.

The stars of BABYMETAL are, in fact, growing up, and there’s only a few more years that Su-metal, Yuimetal, and Moametal can carry the “baby” part with honesty. Regardless, these three girls are swinging for the fences with every song, and their dedication and talent are the main reason BABYMETAL’s fans are so devoted. Opening tracks “Road of Resistance and “Karate” hit you with wave after wave of ferocious riffs and Su-metal’s signature power vocals. If anything, this album is a massive showcase for Su-metal’s maturing vocal strength, and she stretches even more in the ballads “Amore” and “No Rain, No Rainbow”.

The powerhouse WOW track is “Sis, Anger,” opening with a verse from the Book of Revelations, “I watched as the Lamb opened the first of the seven seals. Then I heard one of the four living creatures say in a voice like thunder…”, then launching straight into eye-melting guitar and the sharpest vocal chorus yet from Moametal/Yuimetal. This is the molten-lava-mosh-pit number you’ll need extra gear for at the next concert. “YAVA!” is the track most likely to suit the casual BABYMETAL fans (the ones who think “Gimme Choco!” is their best song). It’s a fine treat for music fans who want lots of sugar on top of their metal.

About those other tracks…

“Awadama Fever” gets to the pop chorus way too fast, and peaking so early kills the fun when there’s 4 minutes of such repetitive machine-track drumming. With so much great technical musicianship on this album (the backing band gets almost as much hype among metal fans as the girls), it’s a let-down that I found myself skipping after a few tries. “Meta Taro is the slow-down anthem we did not need, and by second listen, I was unconsciously chanting “My Totoro…” instead. “No Rain, No Rainbow” (aside from Su-metal’s admirable performance) is an unfortunate attempt to turn BABYMETAL into LATETEENMETAL… and it’s the most overt evidence of too many cooks in the metal kitchen. Power ballads need sincerity and real pain, and youthful enthusiasm and effort just can’t make it real. This is the part in the concert when the otaku break out their light sticks and metal fans take a break to grab a beer outside. “Tales of the Destinies” is the prog-rock, technical-show-off number that seems to be more concerned with band cred than BABYMETAL magic. Great vocals — yes — but man, it’s a lot of work to get to them… this song just wore me out and took the life out of the party.

METAL RESISTANCE is a statement of “BABYMETAL The Phenomenon” and, complaints aside, it’s an album that epitomizes “Go big or go home.” I’m still excited for what comes next, and closing track “THE ONE (English version)” is a re-assuring coda, a solid combination of vocalist and material that beats out the other ballad tracks on METAL RESISTANCE. Elegant, precise composition and delivery make “The One” a winner, and it’s a fantastic choice to wrap up the album.