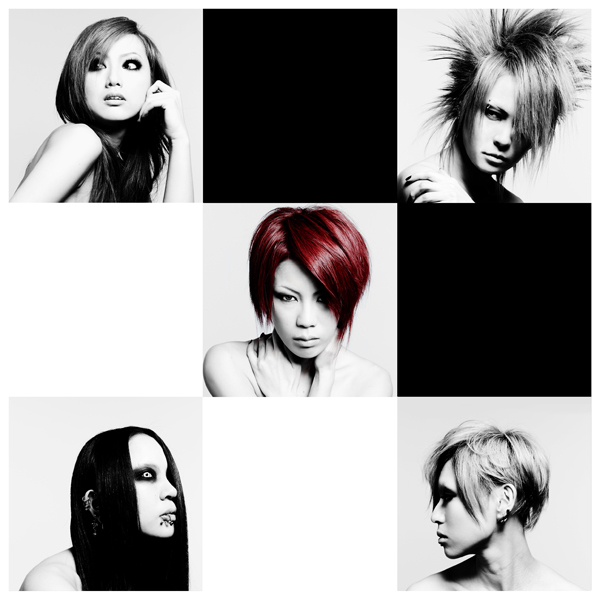 All: Ohhhh! We know what this question’s about!

…where miko gently licks Omi’s neck. It’s a very popular scene among your fans. There are a lot of comments about it on YouTube.

miko: In Japan, when we first released the video, it was instantly a topic–

Jyou: We didn’t even see it when they were shooting — we saw it later! They were just… in their own world.

Mally: We were really shocked.

Naoto: Because those shots came out so good, something else we planned for Jyou got cut.

Jyou: But I had some other cool scenes, so I got over it.

Is there competition for “cool shots” in your videos?

Jyou: We’re all pretty competitive. We all want to have something cooler than everybody else.

miko: Sometimes, when we see the other members’ scenes, we say “Aw, man…! I have to beat that!”

Jyou: In the video for “TRUE,” Naoto got a really cool scene.

Mally: The drums were shot at an interesting angle, too. I think it’s going to look great.

Naoto: But… the miko and Omi parts… we haven’t seen those yet–!

What can you tell about the relationship between the bass and drums in exist†trace? How do you work together when you’re creating a new song?

Mally: We start out with just a basic beat. Then when we feel solid about that, I’ll add some fill-ins. Naoto comes in and she adds things on top of that. She’ll push harder on a certain moment, then I’ll pull it back, or the reverse. I usually record first, so I actually have a lot of freedom, and the rest I leave up to Naoto.

Naoto: Mally starts, and there are certain kicks that are decided. I’ll match them and decide what to do, but sometimes there are things that shock me. On the day of recording, all of sudden the drum parts have changed. I think, “What am I going to do?”

Mally: I’m passionate even during the recording, so sometimes things change.

Naoto: She surprises me a lot. But I like that. You have to go with the flow.

So you two have a strong trust.

Jyou: From our point of view, it looks like they’re really good rivals. That type of feeling comes out in their music, that’s how we get such strong rhythm.

Naoto: We’ve known each other for so long, we know each other’s habits.

Mally: I’ve never said this to her, but sometimes I put in a weird kick rhythm. I think “What’s she gonna do?” It’s a challenge. I don’t tell her where, or anything.

Naoto: No matter what she does, I work with it. I think, “Bring it on!” But nothing ever comes out that I don’t like. She does really cool things.

miko: This is rare!

Jyou: They’re complimenting each other — they’re both probably shocked!

Omi and miko describe their parts as “upper guitar” and “lower guitar” — can you please explain that? How do you balance your two guitar styles?

miko: Balance is really difficult, but from the beginning it was clear we had very different styles of playing guitar. The music we each listen to is totally different, too, so those inspirations show up in our songs, too. We both put our full feelings into each song through our guitars, and the styles exist together. That’s the most difficult part — we want each of our styles to come through and have a place in the song without killing each other.

Jyou: The original exist†trace was just miko with one guitar. Then we had a support guitarist for a while, but when we had auditions, we saw a lot of good musicians before we met Omi. Her personality of sound — it matched miko perfectly because it was so opposite. It’s the perfect combination. If it weren’t these two people, exist trace would not be the same.

Omi: There’s a style of phrase mixing that we can do because we’re twin guitars. It’s fun to play that way. Even when we’re recording, I get a little upset when miko brings in a really good phrase or riff. So we have a rivalry.

miko: Recently, it seems that we’ve been trying to grab different sections. We clash, we fight a little, then we trade. “I’ll give you that one, you give me this one.”

miko: But it’s because of that rivalry that we’ve achieved what we have so far.

What’s the central theme of “RESONANCE”? How does it connect to you personally?

miko: It’s about never being satisfied, even after winning. Even though we’ve been doing this for so long, there’s still a lot of things that we haven’t gotten yet.

Naoto: There’s a lot of things that we don’t know yet. This is the first time that we’ve come to America, so even here it’s just the beginning. It’s not enough yet.

Jyou: Even more than in the past, I’m focusing on the fan reaction. When we perform, I can see the reaction to our music in their eyes. I want to see that reaction more strongly. Every time I see more people at the shows, I want more.

Mally: No matter how much you get, you never have enough.