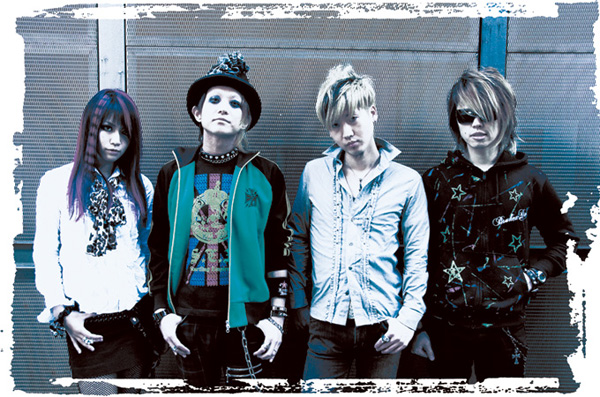 As the former leader and guitarist of Japanese band ketchup mania, unapologetic punk-rocker DAI is no stranger to USA fans. In 2008-2009, DAI toured America with ketchup mania to perform at Sakura-Con, A-KON, SXSW, and the nationwide Japan Nite tour.

After the sudden breakup of ketchup mania in 2009, DAI formed his own label in Tokyo, SPLATTER RECORDS, and began the process of forming his first new band under the label — KiLLKiLLS, which features DAI on guitar and vocals and reunites him with ex-ketchup mania drummer WANI. He gave his first English-language interview to purple SKY about the release of their first album Allium.

What’s the meaning of the band name KiLLKiLLS?

DAI: It doesn’t mean anything, but it sounds dangerous, doesn’t it? Plus, I liked the sound of KiLLKiLLS. I’ve never heard such a band name, and I think a guy who names his band like that is probably crazy.

Is there a reason for the lowercase “i” in KiLLKiLLS?

DAI: I like the band The WiLDHEARTS from the UK. If you look closely, only the “i” is lowercase in their name. I respect them highly.

The English letter “K” connects to your music history. KOGA Records was your first label, and ketchup mania was the name of your former band. Is there anything special about the letter K?

DAI: It’s totally a coincidence, this “K” thing, now that I think about it. KiLLKiLLS usually comes up next to ketchup mania in music lists, so it’s easy to find when I listen to my own music, right?

How is KiLLKiLLS different from the hundreds of other Tokyo punk bands?

DAI: Compared to other bands, I think we’re playing punk music that’s a little old-school from the ’90s-2000. Also, I think we save some good melodies just for the good parts.

How is the KiLLKiLLS style different from ketchup mania’s style?

DAI: The same basically. It has a heavy sound with lots of guitar riffs and it’s very catchy. The biggest difference is the vocals — in the past it was a cute girl’s voice, but now it’s a guy like me whose brain is blown out by too much alcohol.

Tell us how you chose the other KiLLKiLLS band members.

DAI: The drummer WANI was a member of ketchup mania, so we were like “Let’s do the next one together too.” I met the bassist ERY at a party. The guitarist KAMA lives close to me. I wonder if it’s okay to choose them carelessly like that!

Is it a challenge to perform both vocals and guitar during your live shows?

DAI: It’s definitely a challenge, but it’s fun. The problem is that it’s a lot of work because I have to practice both. By the way, I’ve heard that I can be popular with girls if I’m the lead vocal. Isn’t it awesome?

Why is there so much English in your song-writing?

DAI: I’ve always loved and listened to bands from the US and UK since I was small. I guess I’m influenced by them. There are many cool bands in Japan as well, of course.

You just started your own label: SPLATTER RECORDS. What lessons did you learn from KOGA about how to run a strong punk label?

DAI: It starts with understanding what artists want to do, and then the label supports them as much as possible. I’d like to build a label that can share ups and downs with artists, not superficial or shallow relationships that are just connected by a piece of paper like a contract.

Why did you choose “Paradise” for the band’s first PV?

DAI: “Paradise” has a heavy riff, it’s catchy and super fun. I think that song expresses the current version of KiLLKiLLS in just one song.

In the PV, who smashed the pie into Ery’s face?

DAI: I think it was WANI… Thanks, WANI! I don’t remember very clearly because I was WAY too drunk. 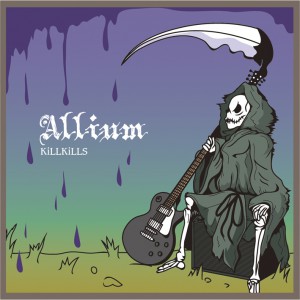 What is the connection between the album’s title Allium and the jacket art of the Grim Reaper?

DAI: Allium means “infinite sorrow” in floral taxonomy. And of course Rock’n’Roll = Grim Reaper, and I think it’s cool. Plus… to be honest, I don’t think we’re anything like angels, so we couldn’t use that image, could we? (grins) Well, maybe…

Why did you start your own label? Is that better for your recording and touring schedule?

DAI: I’ve always looked up to DIY labels like Epitaph, FAT, Pizza of Death, and KOGA in Japan. Also, nowadays even good and cool bands don’t really get a chance to release their music. So I thought I’d give it a shot. It’s easier to pay attention to recordings and handle business when I’m making my own schedule.

At your live shows, is your MC serious or joking? What is the audience behavior at the live shows? Do they get crazy?

DAI: I joke around a lot in my MC. I say the silliest things I can think of. Plus, I’m like that in my daily life too. That’s how I match the audience, because they’re crazy too. They yell back at us and they start the mosh-pit almost right away.

What’s it like touring with band right now in support of Allium?

DAI: The fun thing is definitely drinking with everyone. And searching for drunk girls. Off the stage, I think I’ve always played around wildly, but the other members seem to have become crazier and crazier. Maybe I’m rubbing off on them.

What do you like about playing for American audiences? Do you have any plans to come to America in 2010?

DAI: I guess the part I like the best is that they don’t hold back – they really show their feelings. Everyone truly enjoys themselves. There are so many people in America who like heavy music, so I love performing for them. We don’t have a plan for the US in 2010 so far, but we’ll go anytime if there’s an offer. I want you all to invite us!

Many bands give messages to their American fans. Please give us a message for America that no other band has said before.

DAI: When I eat a California roll in America, I feel like I just had sex with a cute girl. Hachiko is awesome… because that dog bit my ass! Such a gentle dog… (smiles) I love you all America, Thanks! 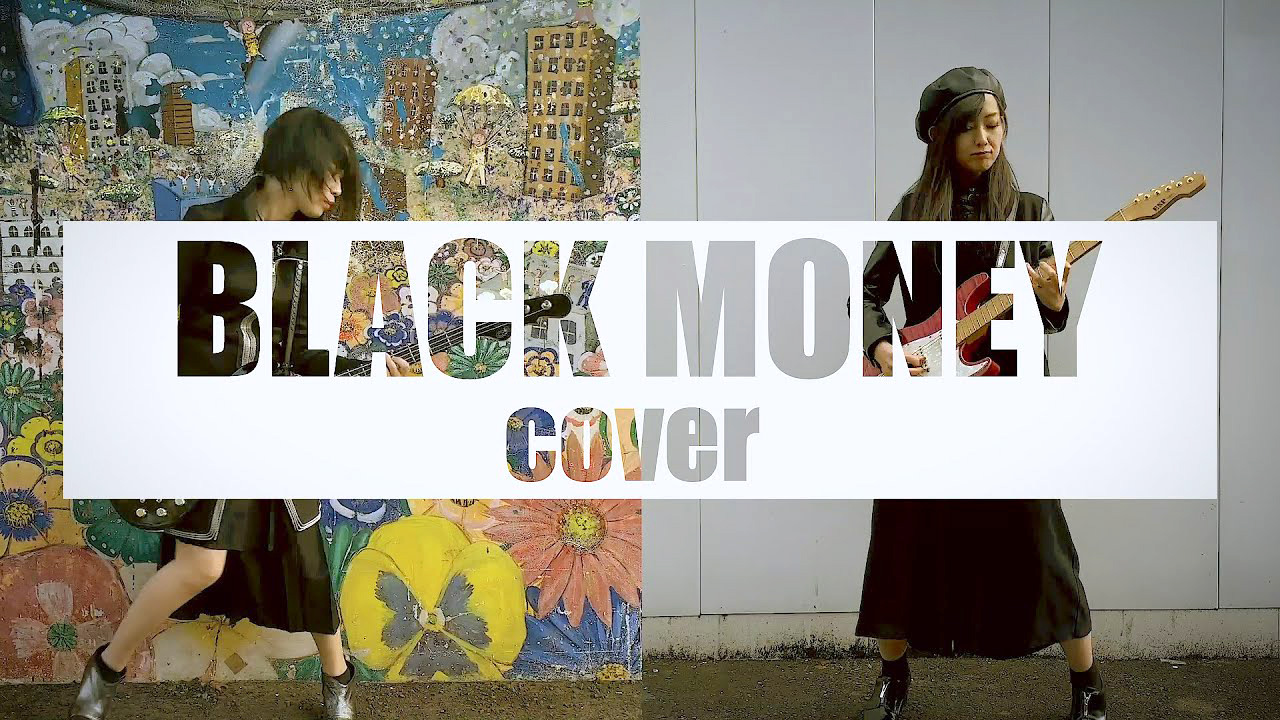 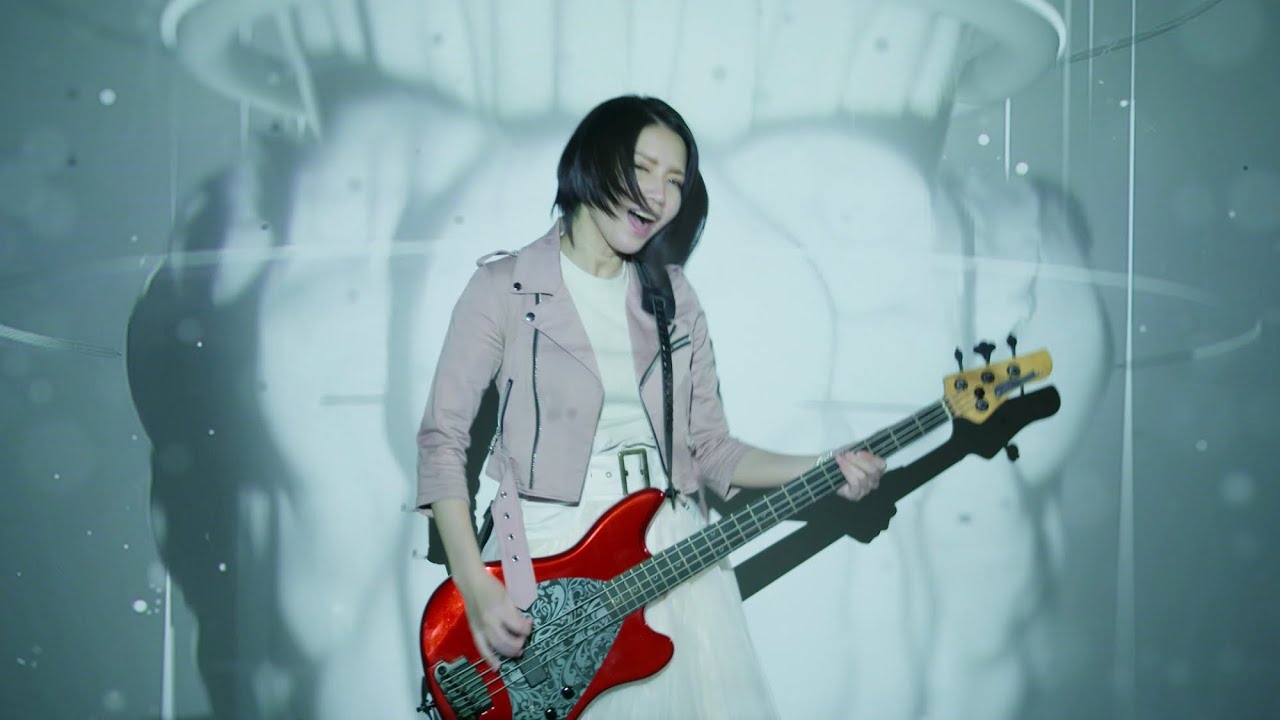