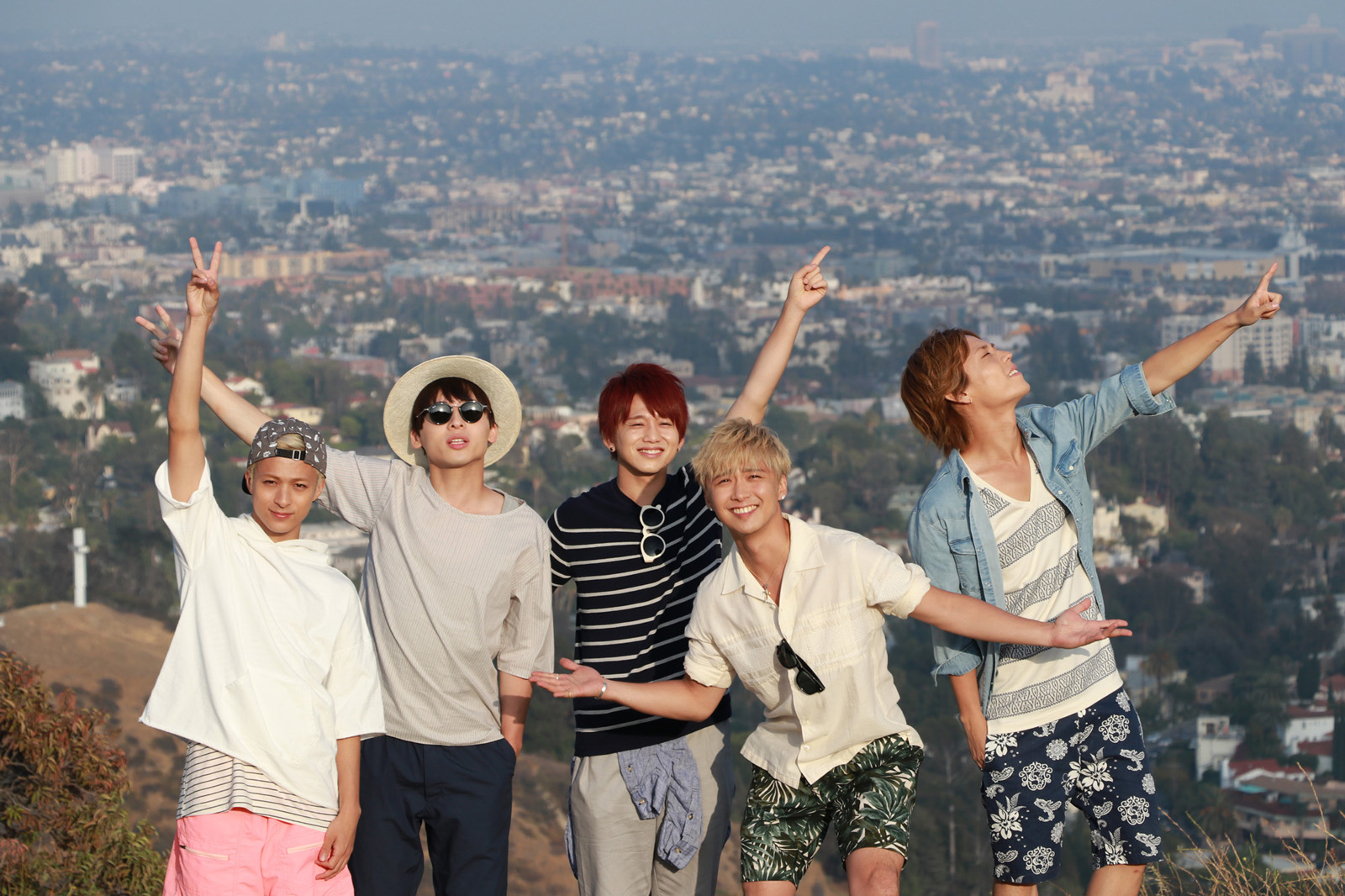 On May 31, 2016, I was on set of the “Two As One” music video shoot for J-pop group Da-iCE on top of Hollywood Bowl Overlook. It felt more like watching a J-drama filming in Los Angeles though. There was no singing or dancing, or even music. Only acting.

Two vocalists (Sota Hanamura and Yudai Ohno) and three dancers, or as they like to be called “performers” (Taiki Kudo, Toru Iwaoka, and Hayate Wada), make up Da-iCE. I first met them in 2014 when I interviewed the then newly major debuted group for NekoPOP. They were fresh faced, and excited to give an English interview. Their friendly demeanor and gestures have remained unchanged, I am happy to report! But what did change was that they had performed their first American concert a few days before.

The bright atmosphere on that hot afternoon day reflected in the group’s mood. “I’m feeling lucky!” Leader Taiki said, when asked about how he felt filming their new PV. “The weather really affects [the luck] — it’s really sunny and bright out.”

They were confident now, but it’s a culmination of success and relief. Before arriving in the U.S. to perform at Fanime in San Jose, they were nervous as hell.

“I wasn’t expecting everyone to be so loud because I thought that people wouldn’t be familiar with us,” Sota admitted. “When we were going up on stage, we expected people to be quiet. Beforehand we thought, ‘How do we get people pumped up for our stage?’ People were so loud though so we got pulled in with the crowd instead.” Toru revealed, “I thought only a few people would show up, but there were a lot of people – I was so happy and relieved!”

The first U.S. performance may have been over, but not their worries. The concern transferred over to filming a great music video for “Two As One” from their upcoming third album NEXT PHASE. “The thing I worried about most was the weather,” Yudai said. It’s not an unfounded worry as Hayate clarified, “Normally when we shoot outside – our manager is a rain-man – it always rains. L.A. shouldn’t rain though.” 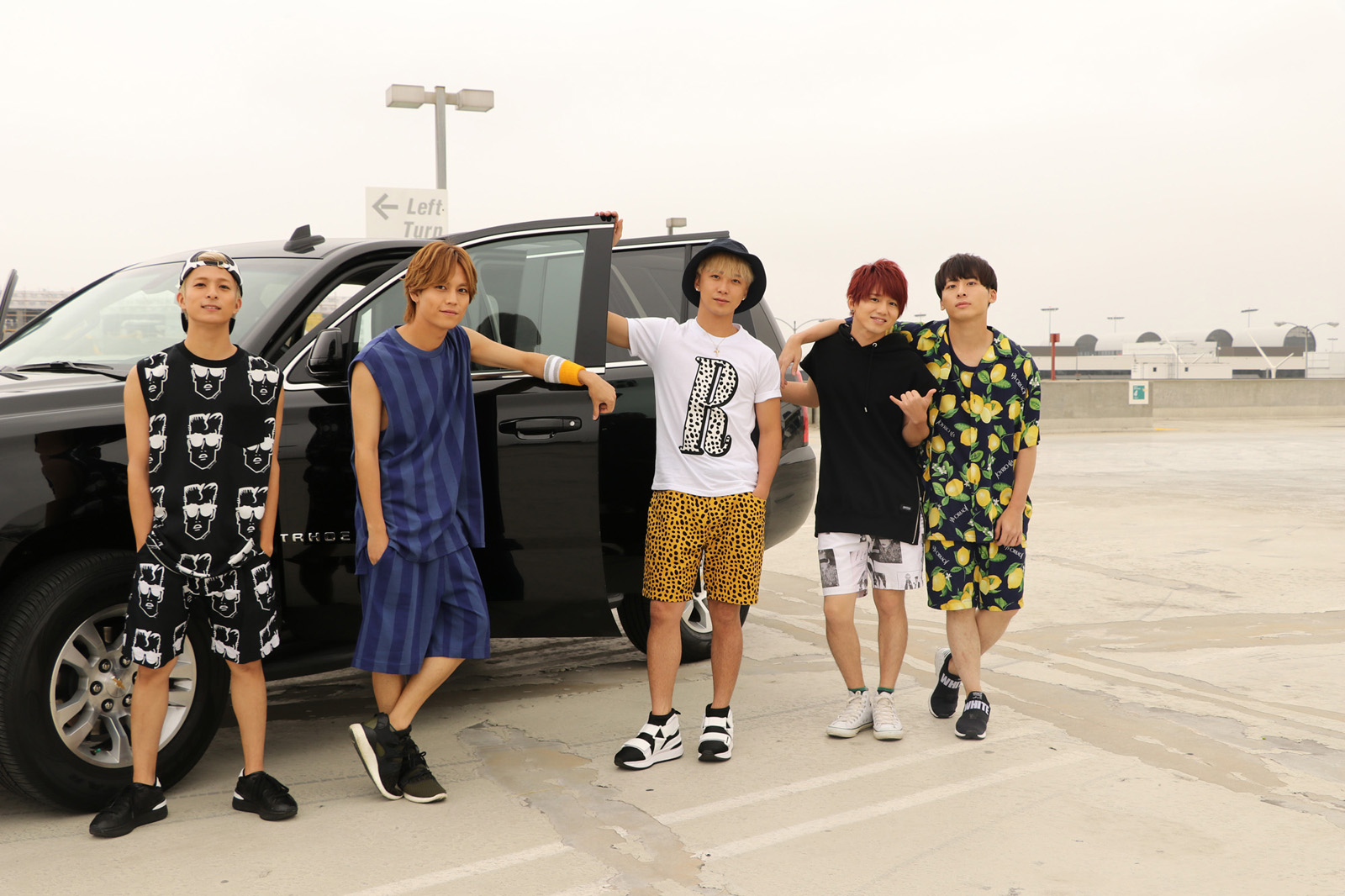 Before filming, the quintet roamed the area. “We’re so high up in the mountain so it’s relaxing up here. I’m having a lot of fun.” Yudai said. Famous landmarks like the Hollywood sign, Capitol Records building, 101 freeway and Griffith Observatory surrounded them. “The view – it’s so spectacular. I can’t see this view in Japan – this view is very American,” said Toru. He fit in the most with the California look dressed in his blue jean top and board shorts.

Around 4 p.m., Toru started the individual takes. In the music video, you can see the view of Mulholland Drive right behind him. Not shown is the tiny and congested parking lot area of the busy tourist destination he was filming in. The tourists distracted me and all I did was observe. But how did he feel to work around this situation? “In Japan, when people see on-location shooting, they will ask, ‘Who are they?’ and start taking pictures even if they don’t know them,” Toru said. He doesn’t know this, but the visitors asked me the same thing that day. “Here I noticed people – not that they don’t care – but they didn’t interfere. It gives us room to be comfortable in what we are doing,” the eldest member continued.

While Sota waited for his turn, he loitered on the side and practiced singing – in English – “My heartbeat will go on.” He asked the coordinator for pronunciation tips and repeated it over and over. Once Toru finished, Sota began from the bottom of the staircase. Midway up the staircase, Hayate took over and lead towards the top of the overlook. After the youngest finished, Taiki filmed his shots right on top with a clear view of the Hollywood sign. The leader’s poses and outfit reminded me of his #OOTD (outfit of the day) posts on Instagram. Yudai finished by leading on the mountain dirt path towards the end of the overlook point.

“The solo scenes are usually relaxed because we’re just walking around,” Taiki said. Each member had his own thought process while filming. Yudai said, “I was imagining the song and trying to match my expression to the emotions of the song.” Hayate simply “wasn’t really thinking of anything but basically, ‘Wow, this view is so beautiful!”

As they walked, each member held a prop in his hands: a single piece of a dice. Due to their name, the dice is sometimes seen in their music videos, like in the beginning of “Watch Out”. Yudai said the dice represents the heart of this song. He added, “It’s about everyone aiming for their dreams. We sing about how when you reach for your dreams, there are good things, bad things, happy things and sad things that happen.” Their own dream was coming true. “Like right now, we have a dream coming true next year, playing Budokan. Before this though, it was only a dream. The song relates to how we felt before the Budokan performance was announced.” Fast-forward to the future in 2017, and we can confirm it was a success.

Da-iCE has filmed many music videos. But this shoot was different and not because it was their first time shooting overseas. “When we film in Japan, there are usually two to three times as many staff, so it makes us a little nervous,” Sota said. “But here, we came with a smaller number of staff so that’s probably why we feel a bit more relaxed,” he continued while munching on nacho cheese Doritos. Taiki also pointed out: “The director is close to our age.” Sota reiterated, but in English, “Taiki’s friend.”

Despite having been up since early morning, the group wasn’t very affected by the long hours. At one point, Hayate smiled for the company camera while posing with the dice prop tucked under his chin. Later, Yudai made a generic pose for the camera then removed the sunglasses he was wearing to reveal that his eyes were rolled back. The member was very happy with the reactions it provoked of those around him.

When Yudai’s shots completed, they filmed the grand finale: the group shot. The members put their arms around each other’s shoulders, smiled and laughed, and looked at the piece of dice — together. The filming progression made sense. As each member started walking alone, they ended up meeting each other at the end. The song may be “Two As One” but it should be “Five As One”.