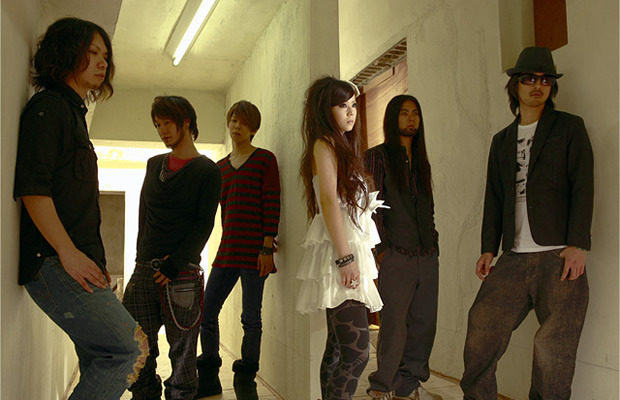 HIGH and MIGHTY COLOR’s April 3rd concert shook the walls, pounded the floor, and hammered nearby freight elevators at the Washington State Convention Center. Having performed twice before for American fans in 2006 and 2007, their appearance at Sakura-Con 2010 was the band’s first opportunity to show their re-awakened metal side with vocalist HALCA taking over for graduated original member Mākii.

Previously straddling the fence between their Metallica cover-band roots and a sometimes pop style supervised by major label Sony, HandMC has surmounted the task of replacing an adored original member and launched a new identity with swamp man. With support from their Okinawa-based label Spice Records, songs like “XYZ,” “good bye,” “hate,” and “living” give evidence of a refined hard-rock sound that invites fans to move forward with them into a new chapter that all 6 members are genuinely excited about.

Mostly due to their anime pedigree, but partially due to curiosity about HALCA’s readiness to step into the spotlight, the Sakura-Con audience filled the hall to capacity (4000+) and kept in stride with the amped 12-song set — then demanded an encore.

Returning to the stage, vocalist YUUSUKE admitted to the crowd that they weren’t prepared for another song, but they were going to play anyway. HALCA, who had lost any bit of timidity after months of touring with HandMC in Japan, asked the crowd “How’re you fucking feeling?”

I sat down with the band the next day to return the question.

This is your third performance at an American anime convention. Why do you keep coming back?

MEG: We really like this kind of audience. They’re very high-energy.

mACKAz: There are things happening all around, like non-stop. It’s fun to see all that.

YUUSUKE: It’s different than a normal live show because of all the cosplay. They have an attitude of “let’s have fun!”

MEG: And because of the location, we can pass them in the hallway of the hotel or the convention center. It’s a kind of “at home” feeling.

Many well-known Japanese music artists say “No” to performing at anime events because they don’t want to be perceived as an otaku band. Do you think you’re an otaku band?

MEG: I think we’re exactly as you see us. I think we probably are, but I’m not sure what level.

mACKAz: We all like anime, and we like a lot of the things that are part of this event, like the cosplay, for example. We get excited when we see someone wearing a costume of an anime we like.

MEG: We all love Bleach.

HALCA, did you know they were an otaku band when you joined?

HALCA: I had no clue. They tricked me.

MEG: I told you at the auditions we were an otaku band!

How did you choose the set list for Sakura-Con?

MEG: We knew there would be a lot of anime fans, so we included anime songs like “Pride” and “Ichirin no Hana.”

YUUSUKE: We added new songs to mix the old and new sides of us. We’re proud of the old music, and we’re proud of the fans who love that music the same as we do. So now we want to show them what we’re cooking next.

YUUSUKE: Even from the start, when you’re making songs, you try to see how you can use both voices. When you’re performing in a single-vocal group, it’s all about your own presence, nobody else. When HALCA is singing I can interact with the audience in a different way. So we’re always adding to each other’s energy whether we’re singing at the moment or not.

HALCA: We both have totally different styles, so it widens what you can express in a lot of ways.

Let’s flip that question to the music side. What does a two-guitar band do differently than a single-guitar band?

MEG: I don’t know if it’s a big deal now to have two guitars, not like it used to be, but it makes a difference when you’re performing. You have two ways to expand the sound of each song.

Kazuto: As a guitarist, you end up doing a lot of the musical arrangements, so we keep that idea of expanded possibilities in mind right from the start.

Is there a HIGH and MIGHTY COLOR song that a single-guitar band can’t play?

Kazuto: It’s not about the individual notes, it’s about how it’s done. If you were going to do it with one guitar, it would just be arranged that way. Basically the way most of our songs are arranged, it’s impossible to do it with only one guitar.

MEG: So I think the real answer is every song.

Do you try out new songs live before recording them?

MEG: Most of the time we only play a live version after the official recordings are finished. In our Yokohama live show last year, we played “RED” before it was recorded, because we knew that song would get the crowd excited. We didn’t know it for sure, but we designed it to make it easy for people to join in.

What songs in the live performance have changed from the original recording?

MEG: When you listen to a CD, you listen in your house or in your car — it’s reproduced by a machine. But in a live show, it’s us playing that music, so it can never be the same as the recording.

YUUSUKE: Sometimes there are songs that we don’t know how they are going to work until we play it live. The people at the show teach us how they perceive the song, and they teach us where they’re going to get excited.

What’s the overall theme of your latest album swamp man?

mACKAz: We recorded the album thinking about the concept of identity. Finding your identity, making it strong.

Why is that important to you?

mACKAz: I’m really bad with words, so I use music to express my emotions. We all have our own identities and definitions. When people are listening to swamp man, I want them to think about their own identities. And now that we’ve added HALCA, I want them to think about the ways HIGH and MIGHTY COLOR’s identity has changed, and the ways we’re still the same.

How would you like to introduce HALCA to American fans?

Kazuto: HALCA likes heavy music, just like we do, I think before there was distance between the band and the vocals. With HALCA, I think we’re more band-like than we ever were before.

SASSY: She’s a headbanger — she really loves music, and even on her own she gets crazy and moshes. She’s close to our audience in many ways.

mACKAz: She was really great… I miss her… (crying)… oh, no she’s alive! Okay. (Everybody laughs.) On stage she appears strong, everyone sees that side of her. But off-stage she gets scared easy. If you tell her a scary story, she gets really upset and tells you to stop.

HALCA: (immediately points at mACKAz and YUUSUKE) It’s them! Those two!

MEG: I think recently a lot of people would find listening to a band’s CD is better than a live show, generally speaking. But HALCA’s live style is 20 or 30 times better, so after the show you tell everybody about it.

HALCA, what do you think about all this praise?

HALCA: I hope it’s true… Wow, thanks, guys! At first I was so scared of everybody at the audition, but they’ve been really kind to me right from the beginning.

What did you think about the reaction of the 4,000 American fans who came to your show last night?

YUUSUKE: Was it really that many? I didn’t have my contacts in, so I couldn’t really see past the lights. But I kind of had a feeling it was just a massive crowd out there.

SASSY: I couldn’t see either, but I could hear everyone. The sound [from the audience] was so big, it took over everything.

HALCA, on the Sakura-Con stage, YUUSUKE introduced you to the audience and you got a huge reaction. The crowd was clapping and shouting and calling your name. What were you thinking right at that moment?

HALCA: I was so happy Americans like me! I think maybe because it was so many people, it was an even bigger welcome than I’ve ever gotten in Japan.

After the 12-song set, the crowd demanded that you come back for an encore. What were you thinking as you walked back on stage?

MEG: I was really surprised. We didn’t have a song prepared, but when you get that kind of reaction, you just have to go back out.

YUUSUKE: We played “Ichirin no Hana” (from Bleach) a second time as the encore. When we played it at the end of the main set, the crowd was really vocal, singing along with us, so we wanted to give that to them again.

SASSY: Normally I play with my ear monitors in, but when we came out for the encore, I took them out and just played with the natural sound. It’s been a while since I did that — I forgot how loud that song really gets!

mACKAz: Until you see it for yourself, it’s really hard to imagine all these people from a foreign country singing our song in Japanese. It’s very powerful when it’s happening.

Is it enough for a modern band to simply make good music, or do you feel your band has to have a message to be successful?

Kazuto: For me, rock music is all about energy. It makes me feel good, it makes others feel good, so having a message isn’t important. We’re going to continue to make rock music and if we happen to find an answer to something, then that will become the message on its own.

You’re only in America for a short time. What thoughts do you want to leave with your fans?

MEG: Coming to America is still a very new thing for us. It’s something we want to keep doing. In order for that to happen, it’s going to take a lot of hard work. So we’re going to continue to work hard, I promise. The message I want to give to our fans can only be delivered from the stage, so I want more opportunities to do that.