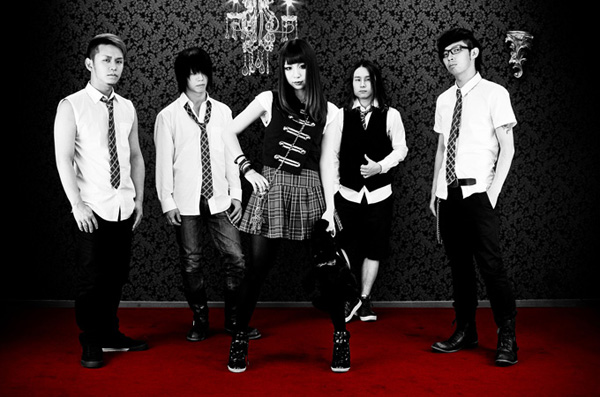 Osaka-based hard-rock band RAMPANT has become a Japanese-indies favorite with their recent releases CHAIN and CHOICE OF LIFE. Performing regularly with female-fronted bands like Guardian Hacker, Dazzle Vision, and exist†trace, the 5-member group is preparing to launch a 19-show tour to support their new mini-album BLOSSOM.

For fans already familiar with your music, “RAMPANT” seems to be a fitting choice for a name. How did you come up with it?

Hiroko (vocals): A long time ago, when I was thinking about the band name, I was reading a book about Ryouma Sakamoto. There was a difficult word — “shouketsu” — in the book, and when I looked it up, I found a lot of English synonyms about “momentum,” for example, and the word “rampant” really stood out, so I liked it. I decided RAMPANT should be the band name.

KA+U (drums): And we’ve been building that momentum ever since! (laughs)

Your new album BLOSSOM releases on October 27, and then you jump right into a 19-show tour that same week. Have you performed the new songs live yet? How do you feel about performing the new songs for your fans?

KA+U: We’ve performed some of the songs already, but it’s different after they’re released. We get excited, and I think the fans will be happy too.

TOMOYA (guitar): We’ve been doing “My winding road to unknown” for a while. We just performed “NAKED” at a live the other day, and the fans liked it. I’m really eager to perform all the new songs.

Kei (bass): Really? I get nervous. Just a little.

In your live show videos, it’s easy to see your fans jumping around and getting pumped up. Which of the new songs from BLOSSOM will makes the fans go crazy?

KA+U: Definitely! Yeah, #1 “NAKED” and #5 “IF I AIN’T GOT YOU.” Or, personally, I think the 2nd song “STILL GROWING FLOWER” has a strong metal-core feel, so I think that’s the one that will make them go wild.

Atsushi (guitar): Same for me.

Kei: The second chorus of “IF I AIN’T GOT YOU” — that’s the one I’m waiting for.

How is the BLOSSOM album different from CHOICE OF LIFE? What ideas did you all talk about before you started writing the new songs?

Atsushi: We didn’t really talk about it, honestly. The sound of this new album came together naturally, I guess.

Hiroko: I didn’t really think about changing, but I hoped to better express what I experienced. So I put a higher value on the lyrics and melodies this time around.

TOMOYA: If I had to pick out a difference between BLOSSOM and CHOICE OF LIFE, I’d say the previous album had a lot of energy overall, but this [new] album was put together nicely with riffs that match the melodies, as Hiroko says. 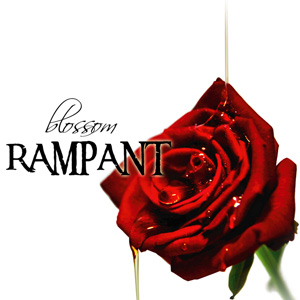 Hiroko: Yes. This [idea] is mine. (laughs) The theme is “love.” The rose is a woman, and the honeybee is a man. It’s a relationship. To know your own existence and the meaning of that existence, and to love someone and to be loved. There are many songs on this album with that theme, and the album jacket is the image of that kind of love.

Why did you choose “NAKED” for the first single? What do you want a new fan to feel about RAMPANT when they hear that song?

Hiroko: It’s cool, isn’t it!? The message we want to deliver is: “Don’t run away, the dream doesn’t disappear, and it’s what you go chasing after!”

TOMOYA: Right! Don’t give up!

KA+U: I hope this will be an uplifting song for everyone.

RAMPANT is an Osaka band. Do you feel that you have a different style than rock bands from Tokyo?

Hiroko: I’m not really sure. I don’t think there’s a big difference…

“WHITE FLOWER” is RAMPANT’s longest song to date (clocking in at exactly 6 minutes). It has a complex structure and is more quiet than your usual work. What was the inspiration for this song?

Hiroko: There’s a long road I’ve walked on for many years, and I wrote this song while remembering the snow we get every year, thinking about that image. It’s a memory.

What’s your rehearsal dynamic like? What do you bring out in each other that fans can see on stage?

TOMOYA: It’s my style to play to the maximum level, whether it’s a ballad or a hard-rock song. It’s always intense, no matter what.

Atsushi: I see a message in the songs. For me, I play “NAKED” with a “Do your best!” message, and I play “WHITE FLOWER” with a “Reach for your dream!” message.

KA+U: I value the mixture of sounds, and for me the bass is naturally important — so I think about how we can work all of these musical aspect together into a solid groove. I think we all listen to each other carefully when we practice.

Kei: Me, too. I pay a lot of attention to KA+U’s drumming, and I focus on the kick-drum, on the overall rhythm. This might sound technical, and maybe not so much fun, but it’s an important thing. This will lead to good music.

Do you plan to release “NEW BORN” on a future album?

KA+U: I think about it, of course, but not now… There’s an energy that can only be delivered live.

Atsushi: Right, it has an feeling that can’t be expressed on CD.

TOMOYA: I agree with what they said, but I’m hoping that we can release it somehow in the future. We’ll figure out a way.

RAMPANT always seems to have a busy schedule. What things do you guys do to recharge?

Hiroko: For me, I like relaxing at a quiet cafe, or playing with my dog, Charlie, as much as I want!

KA+U: I like to do a lot of physical training. I love working out whenever I can.

TOMOYA: I like movies, so I go to the movies a lot. Oh, and recently, I’ve got a new thing – tennis!

What’s your goal right now? What’s waiting for you in the future?

Hiroko: I want to sing in front of as many fans as possible. This hasn’t changed from the beginning.

KA+U: Right. I think that’s the same for all of us, whether it’s in Osaka or anywhere else.

TOMOYA: It’s not a large country, so we can perform nationally. We try to go everywhere we can.

Hiroko: Even if there was just one goal — and even if I found a way to reach that goal — the start of something new would be waiting for me right there, and then I’d start again.