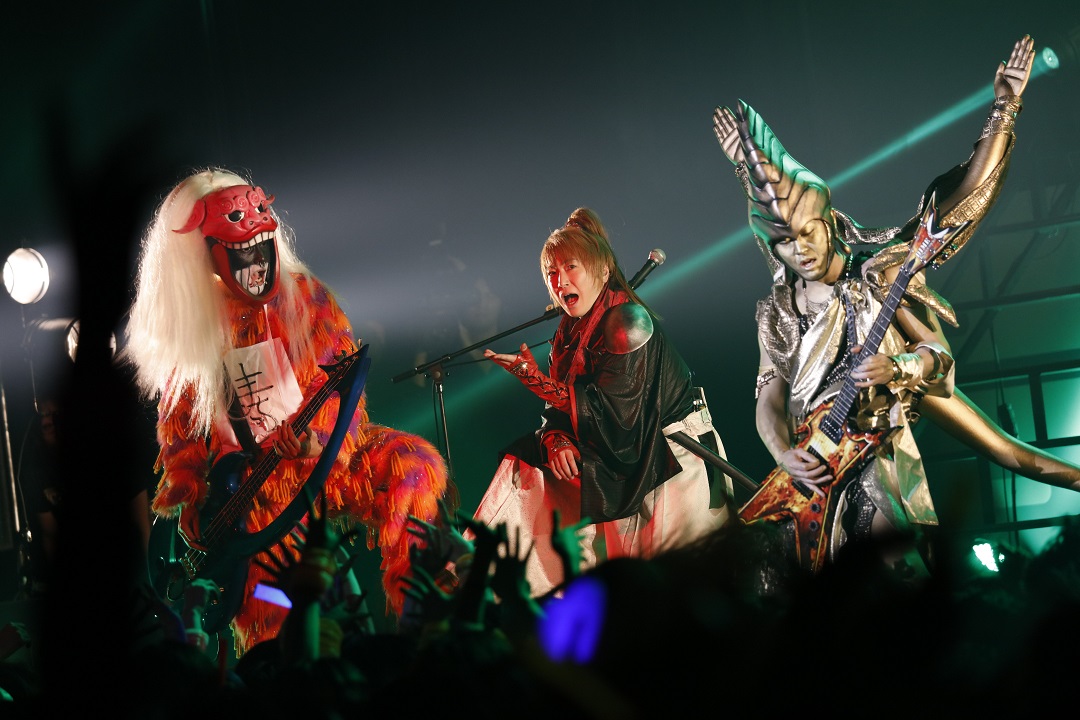 Psycho le Cému has been a huge name in the visual kei industry worldwide ever since visual kei’s overseas boom in the early 2000’s. Hearts were broken when they went on activity pause, and hope was renewed with their activity restart last year. Since then, the members have been working harder than ever, dividing their energy between PLC and a slew of other band activities that each member participates in.

It’s only a few days before Psycho le Cému heads to Paris for Japan Expo 2016, their first Europe performance. They’ll be one of many to represent unique aspects of Japanese culture to Japan lovers in Paris. In this interview, the band talks about their activity restart, their new album, and their preparations for Japan Expo.

-Since this is our first interview with Psycho le Cému, could you please introduce each member?
Aya: I’m Aya on guitar. I also dance sometimes.
Lida: I’m Lida, also on guitar. I pretty much only play guitar.
Seek: I’m Seek, the bassist. I’m the one who’s always wearing off-the-wall cosplay.

-It has been a little over a year since your activity restart. How has it been so far?
Seek: We were able to restart activities and reaffirm our relationship as band members right in time for our 15th anniversary. We had a lot of fans waiting for us, so we really wanted to release some new CD’s. Over this past year, we’ve released 2 new singles and are on the verge of releasing a new album on August 17th.

-Have you noticed any big differences between your activities before the activity pause and after the restart?
Seek: Well, all of the members have been involved in different musical activities since the activity pause, so we’ve had the chance to improve our skills. We’ve been using those new and improved skills to take the next big step as Psycho le Cému.
Aya: At the same time, what’s really important to us hasn’t changed.
Seek: We’ve known each other since we were very young. We grew up in the same area of Japan and came to Tokyo together, so we’re very close. Even during our activity pause, we often went out to eat. We never felt like we were really apart. We’re like family.
Aya: I think we’ve grown up a bit, though. Now we can stand on our own.
Lida: Since our activity reboot, I think each of our roles on stage have taken on a new meaning. It’s helped improve the quality of our shows.

-Do you find that difficult?
Lida: Personally, I don’t find my work in other bands all that difficult, so it wasn’t that much of a stretch for me to add Psycho le Cému’s activities.
Seek: He’s starting to getting a bit old, though…I’m a little worried about him… (members laugh)
Aya: Now we’re working at least four times harder than ever.

-Like you mentioned before, you’re releasing your first new album in 10 years, “NOW AND THEN ~THE WORLD~”, on August 17th. It includes a total of 12 tracks, including remakes of old songs and some brand new songs. How do the remakes sound compared to the original?
Seek: The remakes are probably the songs that our oldest fans will be sensitive about. We don’t want people to think, “Psycho le Cému may have restarted, but their older songs are the best.”
Aya: At the same time, we made a lot of those songs when we were in our 20’s, and we still like them. I think we’ve leveled up in terms of our musical skills, though.
Seek: I think this topic comes up a lot when bands restart; it’s true that we have improved our musical skills as we continued playing music [in other bands], but we also don’t want to lose the vigor we had when we were younger.
We tried to make this album into something that would sound like you’re listening to it live. There are a lot of Psycho le Cému fans that just listen to our music, but I believe we’re a band that is best to see live. So we produced and rearranged our songs so that fans can get a taste of what we’re like live. Look forward to it.
Lida: Some of the songs on it are over 10 years old, and there are ones that we play a lot at shows. That’s why we thought it would make sense to make the album with our performance style in mind. Along with the older songs, we want to show people what Psycho le Cému is like now, both for our older fans and for a new generation of fans. Because of this, we also included a song that I believe represents us as a band.

-What do the new songs sound like?
Seek: The new songs were difficult to make… Musically, we’re a band that makes a lot of different kinds of music. Sometimes we take a concert approach to them, creating them so that we can dance a certain way to them. We also have some heavier songs, and some J-pop songs that emphasize melody. Our new songs are also going to be that varied, to the point where we feel like it’s a shame that there are only 12 tracks total on the album. It was a tough choice, wasn’t it?
Lida: Yeah, it was tough. We also started working with a new producer for the album, and they helped us take a more fresh and new approach to our songs.
Seek: I think you can hear how much each member has improved as songwriters, too. You wrote a track for the first time on the album, right, Aya?
Aya: Oh, that’s right.
Seek: Psycho le Cému has been together for 16 years, and one of the songs on there was written by Aya for the first time.
Aya: Yeah. It’s not a typical Psycho le Cému song, though. It has a newer kind of feeling. It’s a bit poppy.

-You’re attending this year’s Japan Expo in Paris. You’ve performed overseas before, but this will be your first performance in Europe. What kind of show do you want to put on?
Seek: Well, Japan Expo will be like an event show, not like a solo show. And Psycho le Cému is known for stealing the show at events. We get the crowd going crazy. We’re hoping to be able to do that at Japan Expo as well.
Lida: Since Japan Expo is all about introducing all kinds of Japanese culture (not just music), we’d also like to use our appearance and performance style to get more people interested in knowing more about Japan.
Aya: Our shows are more like a play than a typical concert. We’d like to try our hand at using French during the show.

-Will do you your MCs in French?
Seek: We’re not sure yet. You’d think DAISHI would handle the MC’s since he’s the vocalist, but he usually says that he doesn’t want to do that. That’s what he was like for our event in Taiwan. He says, “Seek, you do it.” (laughs)
Aya: We want to include Japanese elements, but we also want people to enjoy the show without worrying about language. Music is the universal language, you know.
Lida: I thought about trying my hand at French as well, but I know that there are a lot of fans over there that study Japanese at school or even by studying our lyrics. We’ve heard that it’s best to play there like we play in Japan.
Seek: I played in France with another band. Even before the show started, the crowd’s volume was amazing. I couldn’t hear the introduction music at all. I’m making it louder this time. (laughs)

-Will you play any of the new songs at Japan Expo?
Seek: We thought a lot about this. We’re curious about just how much of our music that our fan base in France is familiar with. If there are fans that have known about us for a long time, then we’d like to play older songs for them. At the same time, we also want to show them what we’re like now.

-Do you have any other overseas plans scheduled for the near future?
Aya: If we can, we’d like to do a lot of places.
Seek: We’ve been talking about wanting to branch out more overseas. We’ve had the opportunity to play American tours in the past, but there are a lot of places with a lot of fans we want to go to, like South America and Europe.
Aya: I also want to revisit places we’ve played in before: America, Taiwan, France…
Seek: When Japanese bands play overseas, they usually say “We’ll come back!” But we want to make good on our word and go back to those places.

-Lastly, please give us a message for all of your fans and the readers at S-T.net.
Aya: I think there will be many people who are seeing us live for the first time. You must have all different kinds of expectations. We want to do all we can to meet those expectations. Look forward to it!
Lida: Japan Expo will mark our first show in Europe. We’d like to pull it off and use that experience to be able to play anywhere in the world. Look forward to our show at Japan Expo!
Seek: For the readers, thank you for reading all the way to the end. I’m the one with the weirdest costumes. You might wonder if we can even speak, with the way I dress, but I’m not actually like that in real life. (members laugh)
There are a lot to enjoy about our shows besides music, but our music is also an important part to enjoy. All you need to know about the world of Psycho le Cému is to see us live once. Come and see our world.

Japan Expo 2016 takes place Paris-Nord Villepinte Exhibition Center in Paris, France. Psycho le Cému will be attending all three days of the convention, July 7-9. For more details on their schedule and where to get tickets, check out Japan Expo’s official website.