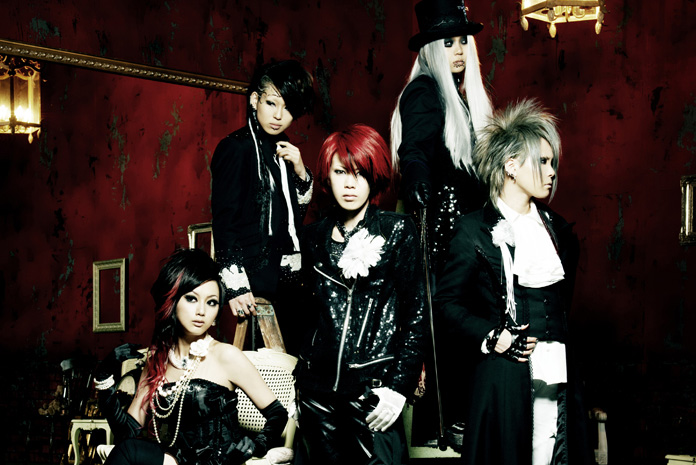 Who first had the idea to name the album “VIRGIN”? It’s a provocative word — did anyone laugh or feel strange about it?

miko: No one laughed or felt strange about it. You’re right, it’s a powerful word, but we thought it’s a proper word for the 1st major album by this all-female band exist†trace. Personally, I think the word “VIRGIN” has meanings like “straight” and “pure”. Each of the 13 songs on this album has a heroine who walks straight towards their own goals. I think this idea fits perfectly with the word “VIRGIN”.

How did the band decide which “TRUE” / “THE LAST DAYBREAK” songs to include on “VIRGIN”?

miko: It was difficult to choose because all of the songs are cool. For the people who might listen to exist†trace for the first time on this album, we chose straight, “exist†trace-Rock” songs, and songs that only we can create.

Visual kei fans give praise to bands that act strong, but they usually turn away from bands that show a gentle side. Do you think you’re taking a risk by creating playful songs like “GINGER”, “Kiss in the Dark”, and “Little Mary…”?

miko: Not at all. I’m confident that no matter what songs we create, they will become exist†trace, so I don’t worry about it. We just continue to express our true selves through our music.

“GINGER” has a double vocal. Jyou, was it strange for you to share? miko, did you know the songs would have a double vocal when you started writing it? What were your worries?

miko: I wrote this song as twin vocal from the beginning, so I knew what I was getting into. I wasn’t worried particularly, but I’m not used to recording vocals, so it was hard work.

Jyou: I discovered a fighting spirit I’ve never known before. I wanted the lead character to shine more than miko (who wrote the lyrics and music), so I had a strong feeling like “I won’t lose!”

exist†trace has 2 exciting guitarists and a strong vocalist, so this question is for Mally and Naoto — Do you feel like the bass and drums have to compete for attention? Do you think it’s fair that the drummer and bass player die at the end of the “GINGER” PV?

Naoto: Of course, I think it’s natural to compete with each other. Because I want people to look at me, too. As for the PV, the ending didn’t bother me, because it was necessary for the story. But next time, I want to be the star.

Mally: Until recently, I used to only focus on providing stable drumming. That was more important than competing. But now I don’t think that’s good enough, and I’ve reset my thinking. In the “GINGER” PV, I wanted the role of the traitor for myself, and I took that role from Omi, actually. (laughs) As for the ending, I think it’s unfair I had to die, but I don’t have anything bad to say because everyone in this video got an interesting part. But like Naoto says, we all like competition, and I want to shine more than anyone on the stage! Maybe that’s why I wear Swarovski [jewels] on my head! (laughs)

Omi, Your guitar solo on “SIGNAL” is really terrific. How do you make a guitar solo unique and still make it fit into the song?

Omi: Basically I prefer a melancholy style for guitar solos. However, for “SIGNAL” I wanted to add a momentum that would fit the song’s melody. I envisioned a three-stage development with choking, sharp changes, and fast playing, to set the mood for the last half of the song.

What songs on “VIRGIN” could only women create?

Jyou: “Anata.” Since miko is a woman, she can write a song that shows the raw essence of women. And since I’m a woman, I can express the song with real emotion.

Omi: “Anata” for sure. No man can express this song. Also, “GINGER” with the twin vocal that’s unique for exist†trace.

miko: I want to say all of them, but to pick only a few, it would be “Anata,” “HONEY,” and “GINGER.” “Anata” and “HONEY” show the unique possessive nature of women, and “GINGER” has cool dialogue that only women can perform.

Omi: People in America are enthusiastic. And their smiles are wonderful. I also regret the lack of English communication… I will practice my English and visit you again, because I want to communicate with you more.

miko: Since this was a one-man tour, it was a challenge to reach our audience and let people know about us. That was very different from the anime conventions we’d done before. I think we need to visit America many more times, and perform more live shows so more people will get to know us.

Naoto: For myself and the band, we became better because of these challenges. Personally, I struggled with some of the live shows, but I enjoyed them, too. I also felt the support of our staff was important. I’m truly happy that fans got excited for the show that everyone helped to create.

Mally: On a personal level, I learned that I can’t compromise in creating the best live show. Of course, there’s no compromise for my own performance, but many times I hesitated to give directions about monitor and microphone conditions, because I couldn’t communicate well. So, I want to learn English and deliver the best-of-the-best performance with a complete performance. We’ll visit America again!

Jyou, many songs on “VIRGIN” require a strong, aggressive performance, but your style on “Anata” is sexy and emotional. How do you make the transition transition between so many different emotions during a live show? Are there hidden sides of Jyou we haven’t seen yet?

Jyou: I don’t do anything special, because my emotions switch instantly at the moment the song starts. It’s important to understand the personality of the main character and the world of a song. The world of IGU’s (exist†trace’s) music has expanded, and it can express anything — any personality, any emotion. It’s a challenge to keep up, but I really enjoy it. I want the challenge of new roles, and even I don’t know what new characters are sleeping inside of me. So I look forward to the future.

What was the band’s reaction when “I feel you” was chosen by Nadeshiko Japan?

Jyou: The [Nadeshiko Japan] manager said, “I could see the players run around when I heard ‘I feel you’.” I was so excited to hear that. The Nadeshiko Japan victory is a pride of Japan. If our music can give them energy, there’s nothing that makes me happier!

The album’s final song “SORA” ends with “Sayonara, bye bye…”. For adults, someday virginity ends and you leave behind a part if your life that you can’t repeat. What did exist†trace leave behind when you created the new album “VIRGIN”?

miko: The restricted concept of “exist†trace has to be like this.” We want to continue to create music that comes to us freely, without being bound by anything.