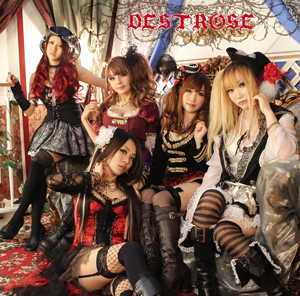 I’d almost given up hope on DESTROSE. Guitarist Mina established herself as a superstar metal guitarist with DESTROSE’s 2-song release Hakai no Bara back in 2010, but between that release and 2011’s EP Deathless Memories, a revolving and sometimes absent vocalist spot has held them back.

Fast forward a couple of years to this year’s release of the band’s first full album, and it looks like new vocalist Marina is the perfect match for Mina’s power-chords and electrifying riffs. “Headless Goddess” and “Skykiller” are great tracks, with epic vocals to match the metal-fantasy titles. Even though some songs have been previously released (“Skykiller,” “Hakai no Bara,” and “Lifer”), the band has never sounded this balanced. The re-recorded tracks have benefited from more polished production — “Lifer” was killer before, but it’s even more amazing here, with strong, deep drums and bass underneath Mina’s spectacular shredding.

Newer tracks like “Nostphilia” and “Fennix” are standouts, and “Romancer” is where you can hear the best mix of the band’s double-guitar lineup. If you’re brave enough to blast this album on speakers instead of headphones, you’re in for some really satisfying, ear-melting metal.