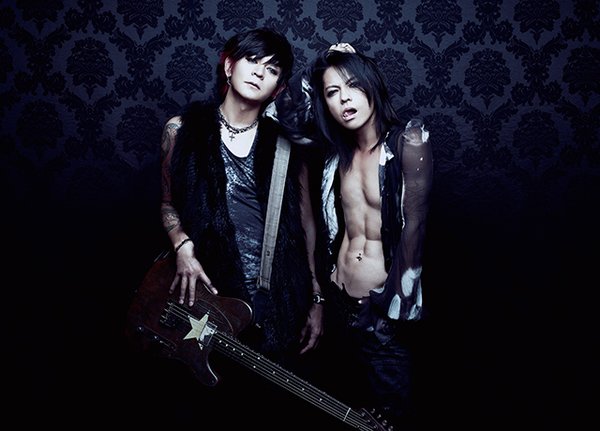 VAMPS, led by HYDE (L’arc-en-ciel) and K.A.Z (Oblivion Dust), are music veterans who have rightfully enjoyed much success at home in Japan. With success, there is a natural tendency to want more. Seeing other Asian musicians taking the opportunity to tour outside of their home country, HYDE and K.A.Z wanted in on the action as well.

VAMPS has toured extensively both at home and abroad since their inception in 2008, forming symbiotic relationships with foreign groups along the way. The vocalist and guitarist are surprisingly humble about the hard work it takes to spread their music around the world. We spoke with the band in West Hollywood before their October 5th show at the Roxy Theater about their experience touring with Sixx:AM, working with foreign artists, and the Japanese music industry. 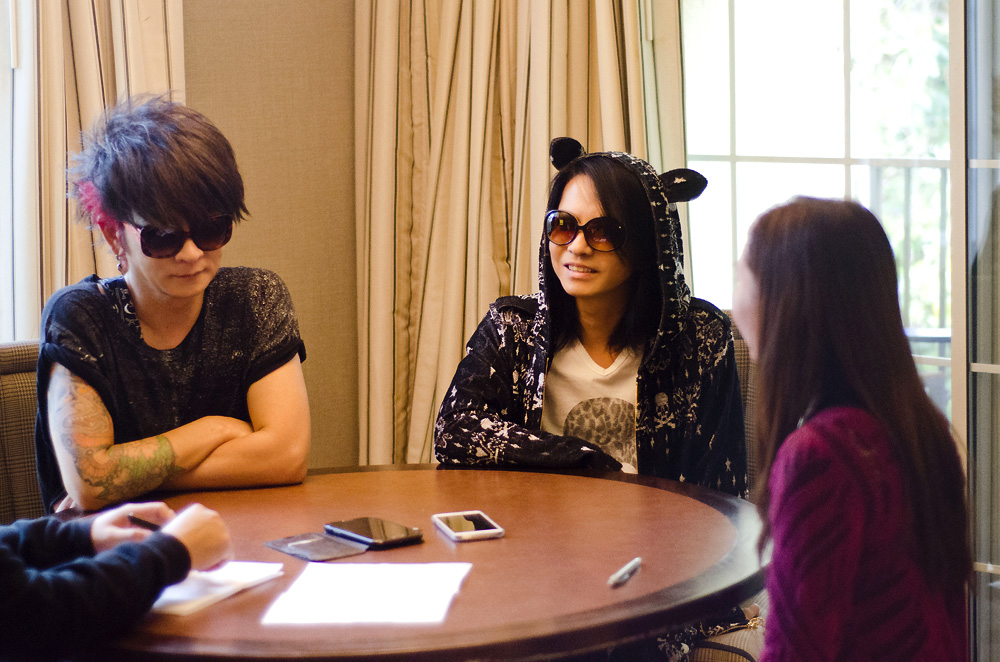 Earlier this spring you opened up for Sixx:AM. What was that like and what did you learn from it?

HYDE: Nikki Sixx (from Sixx:AM/Motley Crue) is a person I’ve always dreamed of meeting. I’ve always been hungry to do something big with him. By watching Sixx:AM’s performance, I learned a lot. It made me want to do more, a lot more, with the band and personally, as well.

Was the touring experience with Nikki Sixx as “rock n’ roll” as you had expected?

HYDE: Yes! (laughs) Although I thought Nikki would be more of a “rock n’ roller”, he was a really good person, different from his Motley Crue days. I never saw any sex or drugs, so it was a little different from my expectations. But it was still cool.

K.A.Z: Sometimes rock stars carry an image of not caring or not thinking too much, just getting up on stage and performing the way they are. But watching the way they did the rehearsal and sound check, they knew exactly what they wanted to do. They weren’t like, “We’re rock stars, we don’t give a shit”. They were always trying to do better. 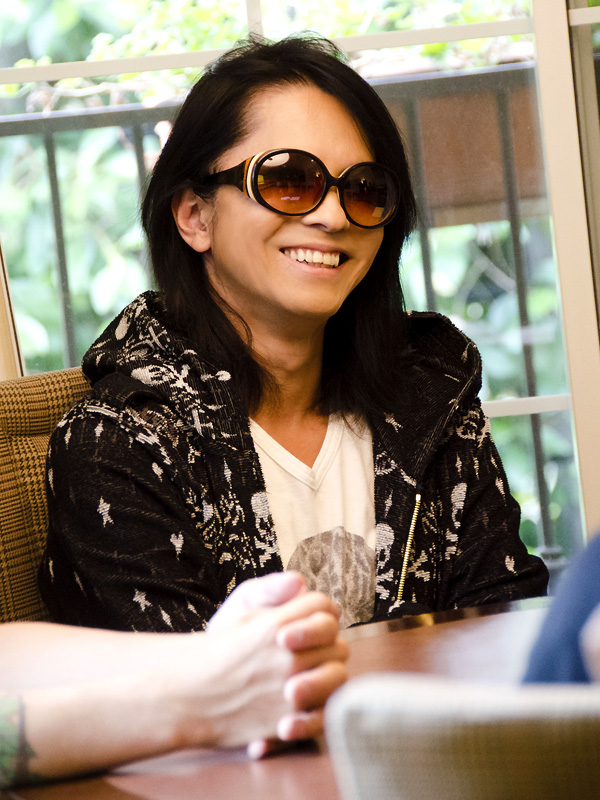 Does touring get in the way of writing new songs?

K.A.Z: I don’t really write anything on tour. When we do, it’s only because of a deadline. Whenever something pops up, though, I’ll try to record it on the voice recorder. Because it’s so impossible to recreate the feelings I had at that moment, it ends up turning out differently when we actually record it. It’s hard to work on songs on the road.

You’ll be playing the Roxy Theater, a much more intimate venue than you are used to. How do you feel when you play a big stage compared to a smaller stage?

HYDE: It’s not something we try to do, it happens naturally.

HYDE, you mentioned in a previous interview that you think it’s a shame more Japanese acts don’t perform abroad more often, and that they’re missing a good business opportunity. What would you like to tell other Japanese musicians to get them to spread out and perform their music overseas?

HYDE: We’re still in the process of trying getting bigger, and we’ve really just started doing international work, so we feel like we’re not ready to give advice yet. Because of the Japanese personality, we don’t have a lot of acts trying to work internationally. It’s a waste. More people should try to come out and perform abroad. 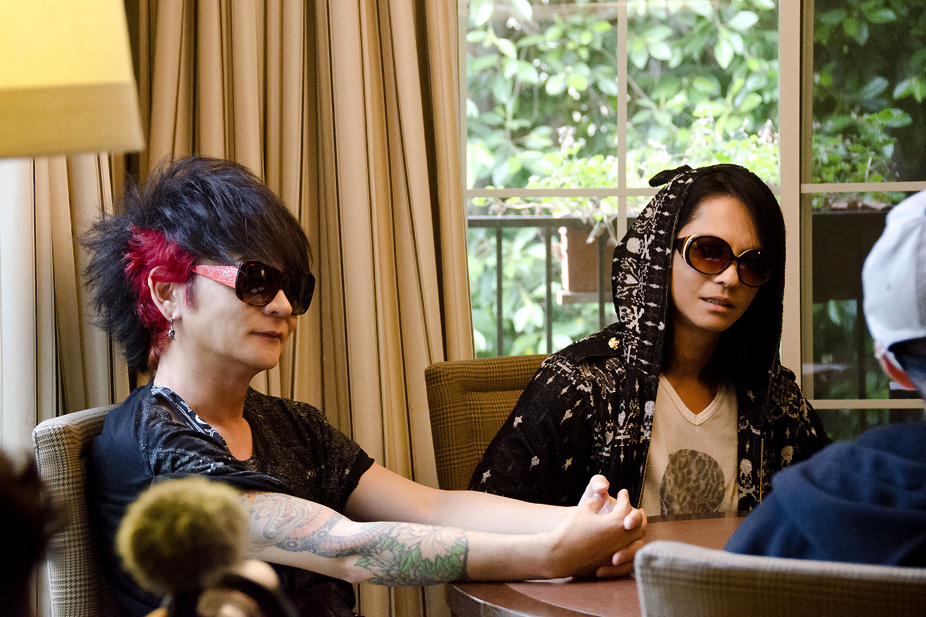 Japan has the second largest music industry behind America, and there’s a lot of great music there so I hope more artists can work abroad too! What’s your formula to successfully reach both Japanese and foreign audiences like the L.A. fans you’ll play for tonight?

K.A.Z: The one thing we can do is do our best, there’s nothing else! The fans can judge if they like it or not by seeing the performance, not by seeing personality. Rock stars have an image of having a “bad” personality, but if the music is good, it doesn’t matter what kind of personality they have, so we do our best to go on stage and show them who we are.

For your upcoming Japanese tour “Joint 666”, you have a different act each night with HIM, Nothing More, and Apocalyptica. You toured with Apocalyptica this past spring for the Sixx:AM tour, so maybe your fans are a little familiar with them already. How did you choose the other acts for the joint concert?

What’s the goal of having joint concerts with foreign artists and including them in your festivals?

HYDE: It’s true that the market in Japan is huge, but not many artists know about that. Nikki Sixx and Motley Crue knew that the market in Japan was huge and if they came out and got exposure, they would blow up and double their income. Other artists should know this as well! When other artists are aware and understand the Japanese market, then they accept the offer.

So the bands help each other?

HYDE: Yes! When we had VAMPS Park Festival, we helped Sixx:AM get exposure in Japan and they helped us get exposure in the U.S. We help support each other in each market. 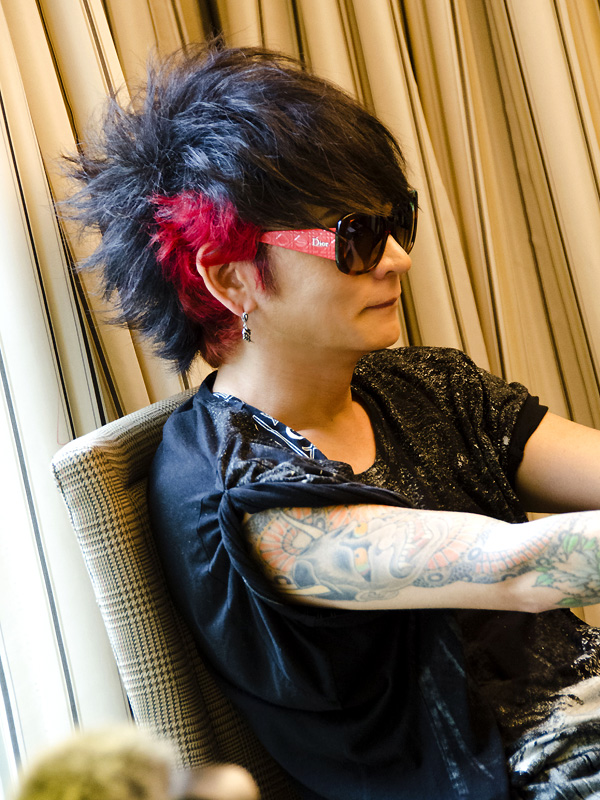 K.A.Z, did you always want to be a guitarist?

K.A.Z: I originally wanted to be a drummer, but the drums were kind of expensive.

How did you get started playing the guitar?

K.A.Z: I found a guitar in my sister’s room. When she was out, I sneaked into her room and picked up the guitar and played around.

The lyrics in VAMPS are quite varied. Some stay with the concept like “Vampires Love” and then there are self-reflective words found in a song like “Inside Myself”. How do you choose what to write about?

HYDE: By listening to the tracks, I try to come up with the story. If I like the story, then I try to shape it into the lyrics.

Why do you think the vampire concept excites your fans so much?

HYDE: It’s our true nature to have a vampire concept through our music. That’s who we are, and our fans love it. People might get bored by the music humans make, so maybe they should listen to this great music that vampires are making.

You’re in the great vampire paradise, Los Angeles, so what’s your favorite thing to sink your teeth in to? 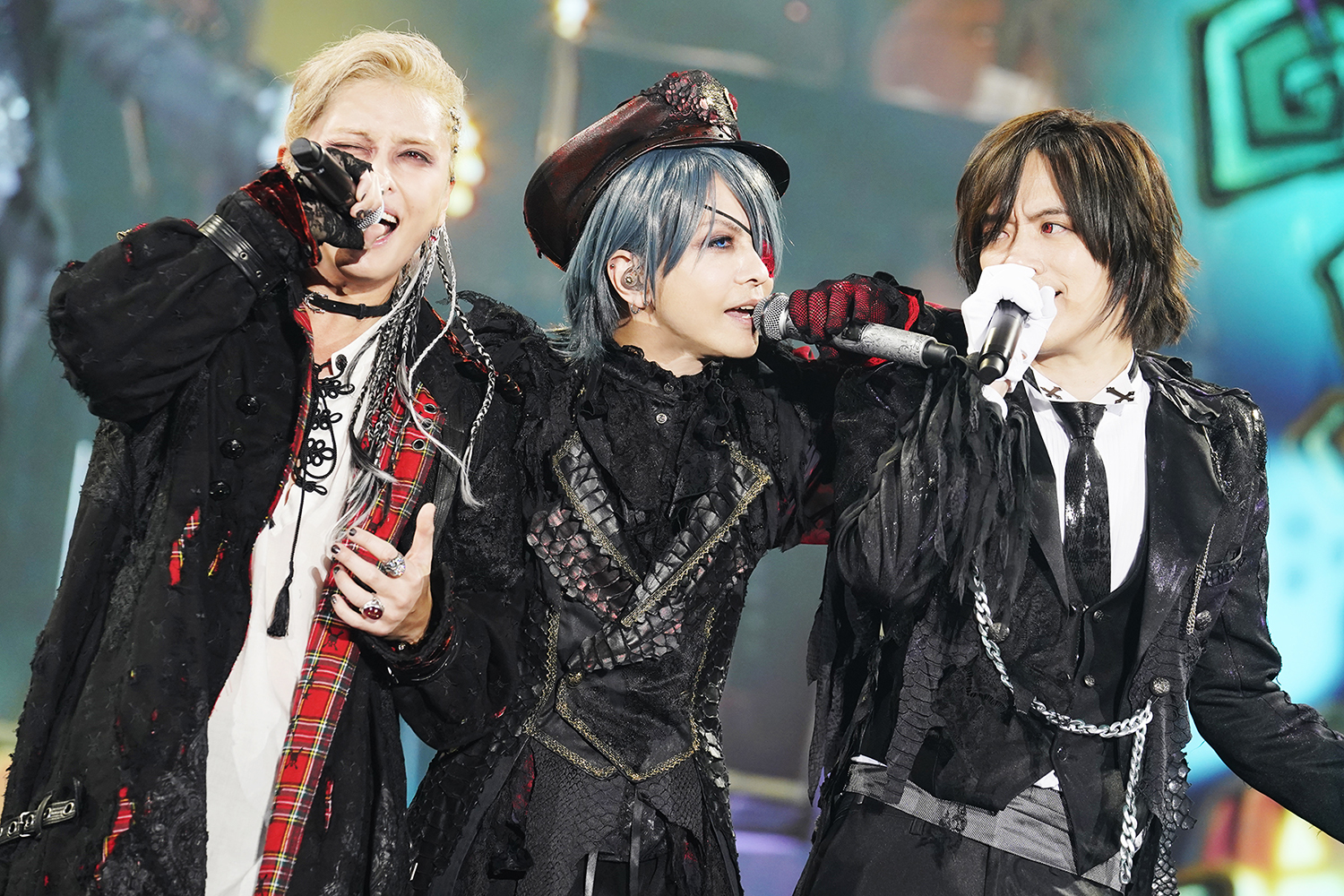