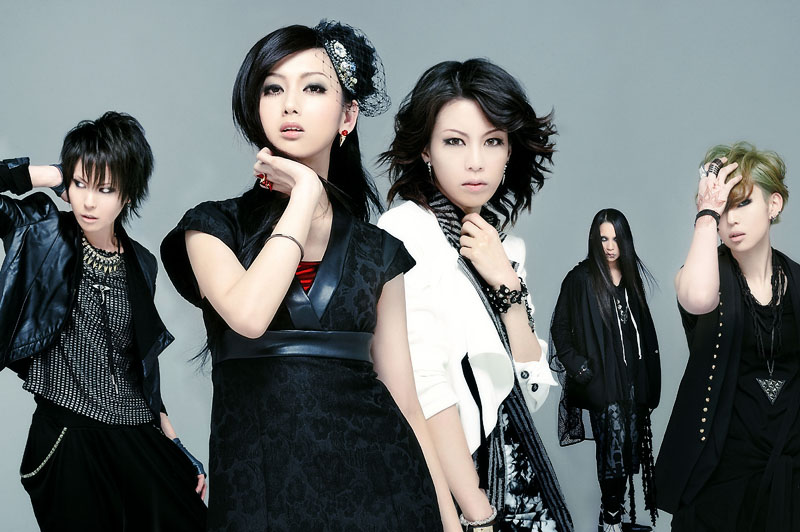 Is the exist†trace live show becoming more theatrical? “Little Mary” and “Anata” seem to be designed for dramatic interpretation, and the way you perform them, it’s almost like a stage play. Are you creating these with live role-play in mind?

Jyou: I’d like to do more of that, actually. I’m really enjoying it.

miko: We don’t necessarily create the songs to be a drama, not for that specific purpose, but sometimes the images come to mind during the creation process, and we think, “This is something we can do with the song to really make it connect to the audience.”

How did Omi end up playing a part in the dance for “Little Mary”?

miko: At first, it was just kind of a joke. It was funny just asking her, but then we were like, “That’s a pretty good idea!” So we all discussed it, and decided to do it, but then it got harder. “We should do it like this,” or “We should try it like that.”

Jyou: Mally and I did the dance direction. We taught them how to dance together.

Omi: It was the first time I challenged myself with something like this. At first, I definitely felt a bit stiff, but I got better as I let myself get into it. I got a lot of advice, and hopefully I’ve become a little more graceful.

Mally: …She still needs a little work, I think!

Do you feel your songs have a developed a more positive feeling over the years?

Jyou: I think you can see places where our music is becoming more positive, compared to the past.

Mally: Like any human being, our feelings go in different directions. There are positive places and negative places. It’s not determined ahead of time.

There must be some things in the world that make you angry or frustrated. Is there still room in your music for same the kind of raw emotion we heard in “Judea” or “Resonance,” for example?

miko: Yes, there is. Of course there will always be something. But we don’t want to just be angry. The way I want to express it is, “Here is what I think about this. Here is how I want to respond.”

Naoto: I don’t feel I’ve experienced a lot of anger, but a lot of sadness…

Jyou’s performance of “Anata” in the Just Like a Virgin DVD is very emotional. Is it hard to watch yourself like this?

The “New World” style of exist†trace has added miko as the second vocalist for the band. The stage setup has been changed, and now miko and Jyou are in the front together. This is a major shift from what we’ve seen before. Why is now the right time to make this change?

miko: I was singing the chorus parts together with Jyou on “Little Mary” and “Ginger”, and there are more twin vocal songs developing from there. There are things that Jyou can do that I can’t express, and now that I’ve started to do more vocals, there are things that I want to express a certain way, and this new setup makes it possible to combine these elements into something new.

Why not two years ago, for example? Is there something different going on for you in this moment?

miko: I don’t think I’m a strong vocalist, to be honest. Two years ago, I didn’t have concept I wanted to express myself that way, but recently, as I’m writing the songs, I feel that something is calling it out of me, so I want to give it my best. And using exist†trace is the way to do that.

Let’s talk about the twin vocals on “DIAMOND”. How do you each think that the other performance is different from your own?

miko: Jyou’s version has a lot more guts than my version.

Jyou: miko’s version has a real “fresh” and “pure” feeling.

miko: There are a lot of things in our voices that are similar. Sometimes we have a hard time telling which voice is which.

Jyou: I think our harmonies came out great. We want to do more of that in the future.

You have fans all over the world who don’t speak Japanese. But it seems that you’re successful in communicating emotions through your music that people can connect to, regardless of language.

Mally: As the drummer, I don’t get to move around the stage a lot. So I’ve got to use my physical expression to communicate my feelings as directly as possible. When the song is about fighting, I really have to pound the drums with all my strength. When the song has a warm feeling, I have to play my drums with warmth and care. During a sad song, I actually feel that same sadness, that makes me almost cry on stage. I want to be a drummer that overcomes the wall of language and words.

What are your feelings about the future?

Jyou: That’s a really powerful image. In order to make that future, we have to work as hard as we can — together, as a band — to make it possible.