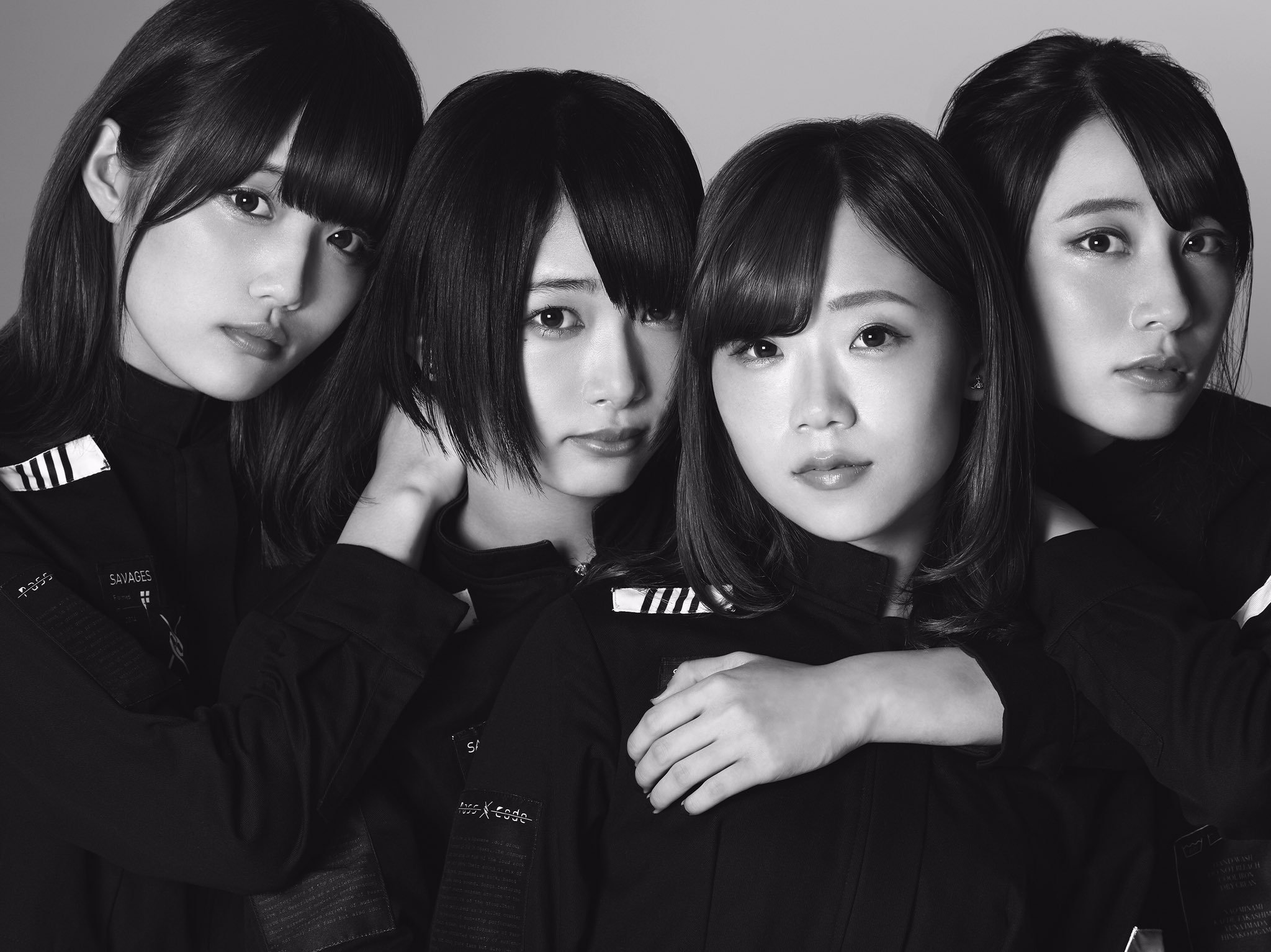 Formed in 2014 with a musical direction towards a mix of EDM and rock, PassCode achieved popularity right from the start. In 2015, the group released their first album and single, followed by performances at major music events Summer Sonic and @JAM EXPO. In 2016, they released the extremely popular album VIRTUAL and signed with Universal Music.

In 2017, PassCode released their first major label album ZENITH, a perfect storm of idol rock and digital hardcore. This year, after the latest in a few lineup changes, the group has released their highly-anticipated album Locus, featuring popular older material reaching back to 2014. All the music has been re-recorded with new vocals and instrumental backing tracks. What does the future hold for PassCode? Only time will tell.

PassCode is gaining more and more fans internationally. For someone who’s just discovering the group, what genre and style would you use to describe PassCode?

Nao: PassCode is a group of four women who perform music that blends various genres, such as loud rock and electronic. I also think that we’re a group whose performance style changes a little bit at each live show, so you have to see it for yourself to understand it. The next time you come to Japan, please come experience it with us.

Re-recording some of PassCode’s early songs for Locus, which ones were your favorites? Which songs were the biggest challenges?

Nao: I really liked recording “Now I Know”, because that’s where the arrangement changed the most. “Club Kids Never Die” was a real challenge for me.

Kaede: I feel like the first song, “Toxic”, has more impact than before. And the atmosphere of “Now I Know” has changed 180 degrees from the original, so it was difficult to find the right balance for that performance.

Yuna: My favorite is “Kiss no Hanabata”, for many reasons. Actually, all the re-recording songs were fun. The new song, “PARALLEL”, was the biggest challenge, because there was no start point. We had to start from zero with a fresh idea.

Hinako: My favorite is “Seize the Day!!” I feel like the instruments make it sound a lot more like our live show, and I feel like the personalities of the members come out really strong in this song. It was “Kiss no Hanabata” that was difficult for me. It’s a rare love song for PassCode so I was worried about how to sing it. I tried to bring out as much softness as I could during the recording.

Why did you choose the title Locus?

Nao: We discussed the name with our producer, and the image of the word really seemed to fit us perfectly. The group, these members, we’re all coming together at this point — this it the time when the paths of our lives, all the things we’ve done so far, are crossing and it’s from this point that we’ll take our next steps forward.

Hinako: Once we decided the name and the concept, we all had strong feelings about it. I put all my energy into matching this idea and living up to the intensity of the indies-era PassCode.

Nao: I want to make PassCode a group that is loved by more people, so that our popularity will spread year by year.

Kaede: For our fans who are waiting for us abroad, I’d love to meet them and share our live performance. If we can bring PassCode’s energy to even a few people overseas in 2018, that will be enough for me.

Hinako: It’s such a rush to see our new release on the top of the charts, and now I want to push our new music to the top every time! I want to make this a year where we perform at many music festivals and meet new fans.

Your live shows are really energetic. How do you prepare for your concerts?

Nao: Everywhere I go, everything I do, I’m always thinking about what I can absorb to use in the live shows. Sometimes it distracts me a little when I should be just enjoying my day, so I’m trying to get better at switching that off.

Kaede: Everyone practices so hard, so it’s on always on my mind how I can do better. Sometimes they catch me singing out loud without realizing it, and it’s embarrassing!

Yuna: I try to just relax as much as I can to save my energy.

Hinako: I go to the gym and run on a treadmill to build up my physical strength. I used to practice singing and dancing separately before, but recently I try to do them at the same time. Also, we watch the videos and listen to the recordings of our concerts so we can see the places where we can do better next time.

Which PassCode song do you look forward to performing live the most? Which song do you wish you could perform more often, that maybe doesn’t make it onto the set list?

Nao: The song that’s the most fun for me is “ONE STEP BEYOND”. It’s a mysterious song, and it stands out from our other works for me. The song I’m always eager to add to the set list is “Catharsis”, but sometimes we can’t add it because of the limited number of songs. It’s easy for our fans to sing along with, and that makes it special.

Kaede: “INSANITY” from the album ZENITH, because it’s fun to dance to. I mean, the dance part is difficult too, but it’s cool. And it’s fun to do the call-and-response with the audience and hear everyone’s voices. “Over there” is a special song from the indies era, and it doesn’t make the set list very often, but the lyrics and melody are beautiful.

Yuna: “Rise in Revolt” is one of my favorites. The new version of “Now I Know” hasn’t been performed live yet, so I’m looking forward to sharing it with our fans.

Hinako: “MISS UNLIMITED” is always the top of my list. It has a special place for us since it’s our major debut single, and the intro is so high-energy that, even if I’m tired, my adrenaline kicks in right away as soon as it starts. And even though we’ve performed “Now I Know” many times, the feeling of the new version has changed so much, I can’t wait to do it live.

Overseas, Yuna gets a lot of attention for her “death voice” — how do you feel when you see the comments from different countries? Do any of the other members ever feel like trying their own “death voice”?

Nao: I haven’t really thought about that.

Kaede: PassCode’s shout belongs to Yuna — it’s our group’s weapon, so I think it belongs to her alone.

Yuna: I’m really happy, to be honest, but I think that I still want to raise my level even more. I want to hear everyone’s opinions and keep growing.

Hinako: I’m really proud of Yuna’s shout. She has so much power. I don’t think it’s something easy that everyone can do, and I have a weak throat, so I’d never dare try it!

ZENITH was recently released on vinyl, and many serious music collectors bought it for their collection. Do any of the PassCode members buy vinyl records? How do you feel about your album being released on this “retro” format?

Nao: My friend’s father has a record player, so I listened to it that way. I was so happy to hear our music coming from a record, I really like the sound. I want to produce more of our albums this way.

Kaede: I don’t really listen to vinyl albums much, and I never had a machine that plays them. Actually I usually see them as things people use to decorate the interior of their rooms, so now I see them all in a totally different way.

Yuna: I’ve never tried vinyl albums before, so ZENITH was my first one. I’m keeping it in a special place at home where I can look at it.

Hinako: I never bought a vinyl record because I don’t have a record player. But recently I’ve been checking out records specialty shops and having a lot of fun. So yes, there are more records in my home now!

PassCode will be appearing on the Warped Tour soon in Japan with a mix of Japanese and Western metal bands. What are you most looking forward to at this event?

Nao: I want to create a live show that will make a powerful impact on the people who have never seen a PassCode live show before, so everyone can say PassCode was a great choice for this tour.

Kaede: Because there are lots of fans from overseas, it’s really a different kind of event for us, so I’m looking forward to their reactions.

Yuna: I want to hear how much noise they can make.

Hinako: It’s a great opportunity to be seen by fans from overseas. When I see PassCode’s high ranking on overseas charts, and reading the foreign-language comments on our social media and on YouTube, it make me realize that people from different countries really like PassCode, so I’ll be happy if we can increase those fans by doing this tour.

What artists are your biggest musical inspirations?

Nao: I don’t really have one in particular.

Kaede: I think BLACKPINK’s way of singing is very sexy and sometimes powerful, I truly respect it. I often take charge of rap parts, but BLACKPINK’s way of expressing various phrases and feelings through rap is amazing, and I’m always inspired by it.

Hinako: Fear, and Loathing in Las Vegas. There are many artists who I respect for their way of singing, but So-san is able to do special things with autotuning that are really unique, so I’d like to be able to find ways to make our style as special as that.

What’s the message of “PARALLEL” — the new song on Locus?

Nao: It’s about frustrating emotions and conflicts that you can’t always deal with like you want to.

Kaede: Our sound producer, Hirachi-san, created it after he saw our previous national tour. It contains the hope that the four of us — even though we each have different thoughts — will keep going strong while holding on to the goals we share in our hearts.

Yuna: I feel that the lyrics express my current emotions and thoughts just like they really are. It’s like we’re searching for an answer all the time while we keep struggling.

Hinako: This song includes many words relating to time, such as “past”, “back then”, “now”, and “tomorrow.” Each person interprets them differently, but during the recording I was remembering so many challenges we faced during the ZENITH tour. Going back even further, exciting memories before we faced those challenges came back to me, too. As I sang with these memories, I felt: “I want to keep going without stopping!” I think that this song makes listeners remember the past and think about the future, too.