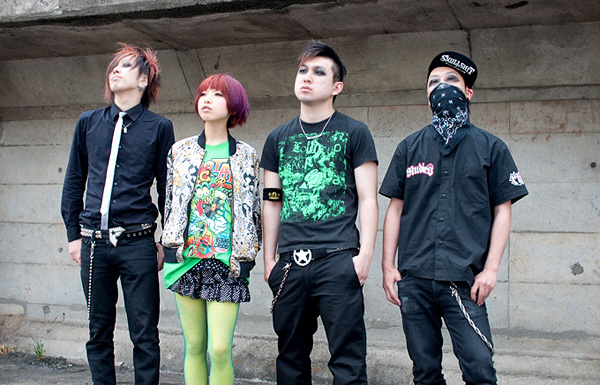 What’s the meaning of CANTOY’s name?

Catherine: It will take a long time to explain. It’s not important right?

Ken: It doesn’t take long at all!

miri-pow: The band was called “Candy Toy Box,” but that was too cute. So we shortened it and made it cool.

Your liner notes for MissMatch!? give special thanks to “beer” — can you explain why beer gets such a special mention?

miri-pow: The reason is because everyone loves beer!

“C.A.N.T.O.Y.” opens literally with a “Fuck you! Fuck you!” to your listeners, and in “Touzaisen,” miri-pow chants “Kiss my ass!” over and over — why is CANTOY so pissed off?

Ken: Why ask why?

Catherine: Because mom wouldn’t give me any money. (fake crying) There can’t be any other reason, right?

When did you start the tradition of handing out Asahi beers at your live show during “Super Drive?”

miri -pow: Well, first of all, “Super Drive” is the song we always play in our live shows, no matter what.

Catherine: The audience would always get drunk off when we started playing “Super Drive”. At first we didn’t hand out beer.

Ken: We understand that the audience wants alcohol. That’s why we always play this song.

HAGA-CHANG: It’s a great song. Of course I want the beer more than the audience!

HAGA-CHANG: So, the fans started to rush the stage to get the beer. We couldn’t have them come on stage, so we had no choice but to pass out the beer to them.

miri-pow is a small girl with a cute smile, and she models for Harajuku fashion magazines — why are you in a punk band? Shouldn’t you be singing something cute and happy instead?

miri- pow: Really, I want to be like Lady Gaga.

What’s it like to work with Splatter Records / ex. ketchup mania leader Dai Kato? How has he influenced you?

Ken: When we were a poor band he grabbed us from Nagoya.

Catherine: Dai — while holding a drink in one hand — said “You guys are great!” He’s been a big influence on our music. And did I mention he likes drinking?

miri-pow: If Dai Kato wasn’t here, we wouldn’t have come as far as we have. We really appreciate him.

CANTOY is based in Tokyo, but you’re always touring. What city (outside of Tokyo) is your favorite to play?

Catherine: Tokyo is #1 because you can drink and take the train home.

(Everyone else just nods.)

How do you keep your energy up for long tours?

miri-pow: Every morning I eat natto and drink red bull! 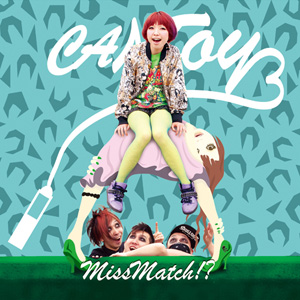 On the jacket image for MissMatch!? it looks like Catherine is pointing up miri-pow’s skirt. What’s he seeing that makes him look so amazed?

There are hundreds of punk bands in Tokyo now, and a large percentage of them have female singers. What makes CANTOY different? How do you get people’s attention?

miri-pow: You’re right, there are a lot of girl vocal bands out there, but there’s no band like us.

HAGA-CHANG: If you want to see that yourself come to our show.

Ken: If we’re invited to play in the US, we’ll show you!