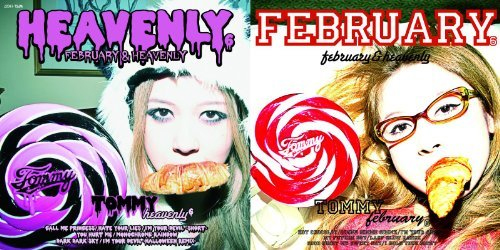 It doesn’t feel fair to review the two albums separately. I kept experiencing a sharp pangs of infidelity, like secretly dating two sisters. That’s certainly the intention behind the stylistically different personas created a decade ago by Tomoko Kawase. For a real head-trip, put the songs on shuffle and try to wrap your mind around the candy-coated chaos that runs inside the head of the brilliant green’s demure lead singer.

Released in conjunction with the Tommies’ 10-year anniversary, the 2-CD set leads off with the synth-pop excess of “Hot Chocolat.” The solid composition of the opening track and the follow-up “Gimme Gimme Gimme” conjure memories of early Tommy February6 — it’s a comfortable start after a long absence, and these two opening tracks are just begging for you kick up the volume on your stereo/headphones.

“I’m Your Angel” brings back the soft cowbell / digital drums of the 80s, and it could easily have been a coupling track with 2002’s “Everyday at the Bus Stop.” (remember that?)

“My Future Boy” has a cleverly overt chorus (“Dancing with my future…!”) that just completely won me over. At first listen, “Last Slow Dance” starts soft, but listen carefully for a subtle hint of Tommy Heavenly6 midway, getting a little restless for her turn at the mic.

“Goodnight my Sweet Day,” and “I Hold Your Night” aren’t as exciting. Both tracks seem to have gotten stuck in the concept stage, and the emotional focus just isn’t as sharp as the 5 preceding tracks. Maybe they suffer from pre-Heavenly anticipation.

Sweet little Tommy February6 gives you a kiss on the cheek and says goodnight really quickly on the porch. Tommy Heavenly6 is the girl you’re dialing as soon as you turn to walk away. Let’s be honest: Heavenly is the one you’re going to stay out all night with and get sh*t-faced with, stumbling from bar to bar until first train.

Straight out of the gate, “Call Me Princess” is determined to rock you. Compared to “FEBRUARY’s” precise musicanship, there’s a sense that everybody in the band in having more fun on this side of the album. Slamming guitar and drums in the bridge. After the hard-rocking “Hate Your Lies” punched me in the gut a few times, I knew I’d pick a Heavenly6 live show over a February6 concert without thinking twice.

“I’m Your Devil” is brilliant green-ish in the verse, but the chorus is decidedly Heavenly6 style. There’s an honesty in her aggressiveness that I didn’t quite believe in the early Heavenly6 singles. Age has given more credibility to the “rock” persona of Tommy Heavenly6, and “I’m Your Devil” and “You Hurt Me” show a newfound power.

“Monochrome Rainbow” isn’t my favorite — all the pieces are great, but they’re mixed too heavily. It’s overproduced, and Tommy’s more-subtle-than-usual delivery tends to get lost. You’ll enjoy the video more than the recorded track.

“I’m Your Devil (Halloween Remix)” is a masterpiece of fun. “I’m not your wish come true… Be careful.” Theatrical, sadistic, enchanting. Tommy Heavenly6 plays cat-and-mouse with her newest victim. If/when she performs this live, this extended version absolutely must be included.