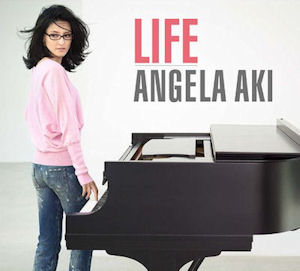 Life, Angela Aki’s fourth album, was released a year and half after her Oricon chart topper, Answer. This is the second time she has produced an album on her own, and the result reveals her growth as a musician and songwriter.

The first track, “Ai no Kisetsu”, is typical Angela Aki: a catchy and powerful piano-driven song. Next is “Kagayaku Hito”, which features Aki on acoustic guitar. Although she relies on her vocals to carry the song, she demonstrates that she is more than a one-instrument wonder. Co-written by Grammy winner Janis Ian, “Every Woman’s Song” celebrates womanhood and diversity. The lyrics are somewhat clichéd but uplifting. If Lifetime ever needed a theme song, this would be perfect.

The blending of the guitar and piano makes “Sign” sound more like it was by The Angela Aki Band. On the other hand, “Remember Me” is all about the solo artist. Aki belts out the chorus with her heart and soul, and the accompanying orchestra adds drama without overshadowing her voice. The next two tracks, “Unbreakable” and “What Are the Roses For?”, veer into country territory, specifically the melancholic side of the genre.

“Ai to Bansoukou” is another powerhouse number, but it lacks the punch that others have. Following it is “Mad Scientist”, a jaunty confrontation of a lover’s jealousy gone out of hand. The shattering glass and piercing shriek at the end make the song seem like a B-horror movie: not to be taken seriously. In contrast, “The Truth Is Like a Lie” is the saddest song of the album. Aki’s vocals and piano-playing is soft as though she is consoling herself through music.

There’s another mood change with the upbeat “Bop Bop Bop (Colors of Your Soul)”. The “bop bop bop” line is awkward, but Aki makes up for it in technical piano playing. The light and airy scales are a nice change from her usual strong chord progressions. “Haha Naru Daichi” refers to Mother Nature, and thus, the woodwinds and strings provide an appropriate pastoral feel to the intro. Aki draws out the notes as though this was a last farewell or a finale.

As a result, “Life” feels more like an epilogue. It is a quiet but solid conclusion and a reminder of Aki’s strengths: passionate singing and piano playing. This seems to reflect the answers she has found through the journey of love, heartache, struggles, and triumphs in Life.