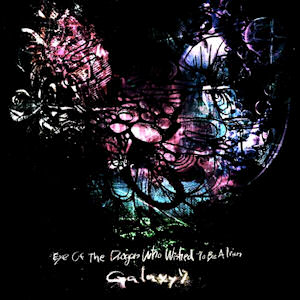 Galaxy 7, the solo project of composer Daisuke Tsutsui, is known for fusing hard rock with electronica. The result has generated buzz overseas, and his latest release, Eye Of The Dragon Who Wished To Be A Man, is definitely something to take note of. The album, sung entirely in English, is full of surprises and unique elements that will catch the attention of both fans and newcomers.

The first track, “slave”, begins with a fierce guitar phrase that is slowly built upon through the addition of new instruments and beats. Everything comes together into an energetic electro-rock number until about two thirds into the song. There’s a shift to a lighter, more melodic sound. The catchy beat makes that section an excellent dance party track. Likewise, “n.b.d” is fast-paced and full of attitude. A sharp guitar riff kicks things off before a pounding drum beat enters and powers the song forward. The high octane piece would be the perfect theme for a sci-fi action movie or video game, especially with the lyric, “You are the chosen one”.

The mood changes drastically with “after leaving you”. It’s dreamy and much gentler. The vocals are sweet, but Tsutsui struggles to hit some of the higher notes. “in the blue (no one can catch me)” maintains that easy-going pace. The blend of high and low vocals creates a unique texture that is both sexy and soothing. The next song, “super explosions (geeky akai killer mix)”, goes back to the harder, more robotic sound. The techno influence is strong though the short guitar solo amidst the electronics adds a nice rock touch.

The intro to “acid green” drags on for over two minutes—a little too long for what sounds mostly like a bunch of noise. The rest of the song, however, ventures into the realm of alternative rock and showcases some creative rhythms. Contrasts are Galaxy 7’s strength, as seen with “in the blue”, and it’s highlighted again with “one”. A strong bass line drives the song, but the melody is embellished by delicate piano notes. The result is an ethereal piece that remains grounded to earth.

Galaxy 7 manages to create funk out of electronic music with “you are me”. Tsutsui channels a bit of Prince in his smooth and sexy vocals. Midway, the song morphs into a cousin of “acid green” with the same resonating sound. The next track, “madskippers (i was born there)”, has an aggressive, grinding verse juxtaposed to a catchier chorus. It’s an interesting combination of industrial and pop. Finally, “stay” delivers yet another surprise: a stripped-down ballad featuring both piano and strings. The focus though is on the melancholic singing, and despite the quietness, it is a powerful finale.

Not only does Eye Of The Dragon Who Wished To Be A Man contain a plethora of musical genres, but there is an innovative spirit that breaks down the walls dividing those different styles. Many of the songs contain a futuristic vibe, which is very appropriate for an artist leading the way to new sounds. The future of music is here with Galaxy 7.