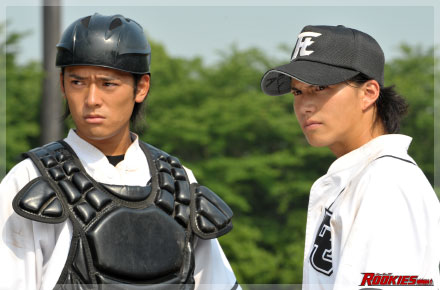 SUMMARY
The Nikogaku team faces off against their old nemesis Enatsu (Yusuke Kamiji), the instigator of the brawl that disbanded the team and crushed the dreams of the young players. Kawato (Ryuta Sato) states it outright at the start of the episode, proclaiming that the boys are facing off against the ghosts of their former selves.

Aniya (Hayato Ichihara) starts off with a surprise attack – a newly-acquired curveball, which catches both his opponents and teammates off guard. Still, his hot-headed focus on destroying Enatsu with his trademark fastball earns him a quick rebuke from his teammates, who remind him things are different now. It’s time to do things together. Aniya follows catcher Wakana’s (Sousuke Takaoka) signals and strikes Enatsu out. 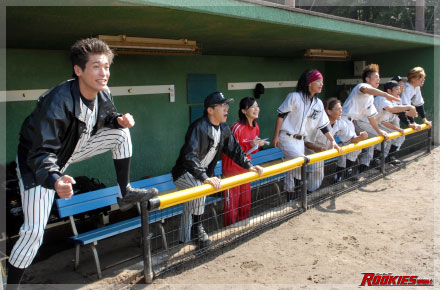 It’s an energizing moment for the Nikogaku team, and the Megurogawa squad starts to fall apart, with half the team going so far as to sit down in the outfield. Kawato challenges the team to give their best or go away. The speech has the desired effect, and Megurogawa pulls ahead to a 9-2 lead. Enatsu’s wearing himself out pitching non-stop fastballs, but his teammates have figured out Aniya’s curveball and it looks all but lost until Nikogaku rallies in the ninth inning. 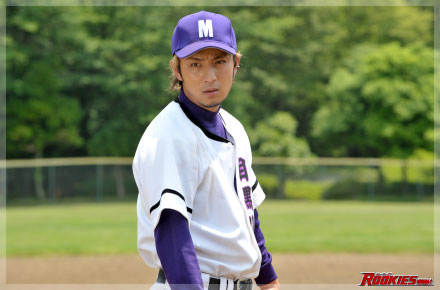 Aniya and Enatsu face off on the field, swearing to give their best at the inevitable rematch in the summer. Even as the team celebrates, they’re reminded that they owe a debt to their upperclassmen senpai who quit the team because of the previous violence. The boys take a beat down at the hands of their former leaders, who charge them to earn their forgiveness and keep winning. 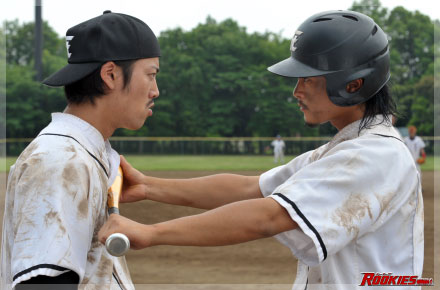 THE COACH’S VOICE
Sato nearly dislocates his jaw with his screaming – it’s fearsome and comical at the same time, but either way, it commands attention.

THE ROAR OF A LION
Shinjo (Yu Shirota) refuses to back down, and accomplishes a triple base hit on sheer force of will. His triumphant yell when he scores “safe” on his slide to home base is the voice of a young man who just told the world what to do and made it happen.

THE WHISPER OF FRIENDS
Whn Hiyama passes the bat to Hiratsuka for the inning’s final at-bat, it’s the episode’s most emotional moment as friends admit their vulnerability and their desires to each other.

THE VOICE OF A…
“I just heard the voice of a goddess!” yells Hiratsuka after Toko (Eri Murakawa) cheers him on from the dugout. Kenta Kiritani hits another comedy home run.