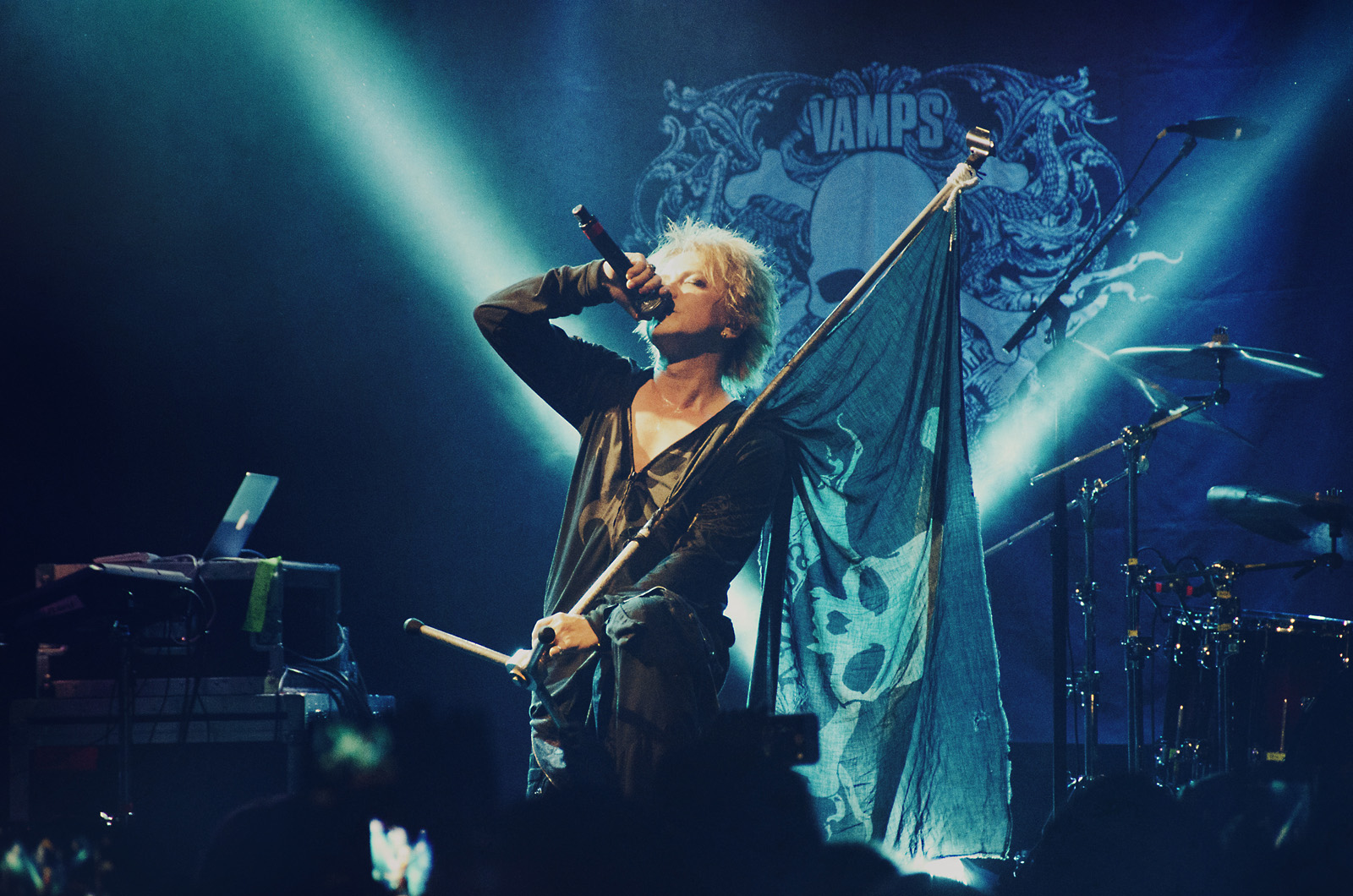 VAMPS is a band full of surprises. When photos of HYDE as Harley Quinn and K.A.Z as the Joker came out from their Halloween party, it took the Japanese pop and rock community by storm. I couldn’t believe I would be seeing the same men within weeks. A day before the American tour started, HYDE further shocked Instagram followers with photos of his new, choppy, blonde hairdo – it’s been years since he was blonde, and ages since it was short. But imagine the L.A. crowd’s screams when he pulled off his hoodie to unveil the new hair style and their amused bewilderment when the band covered Rihanna’s “Diamond” live. The band’s raw energy and passionate fan reactions continued to surprise me at El Rey — and I’ve seen them at least five times. 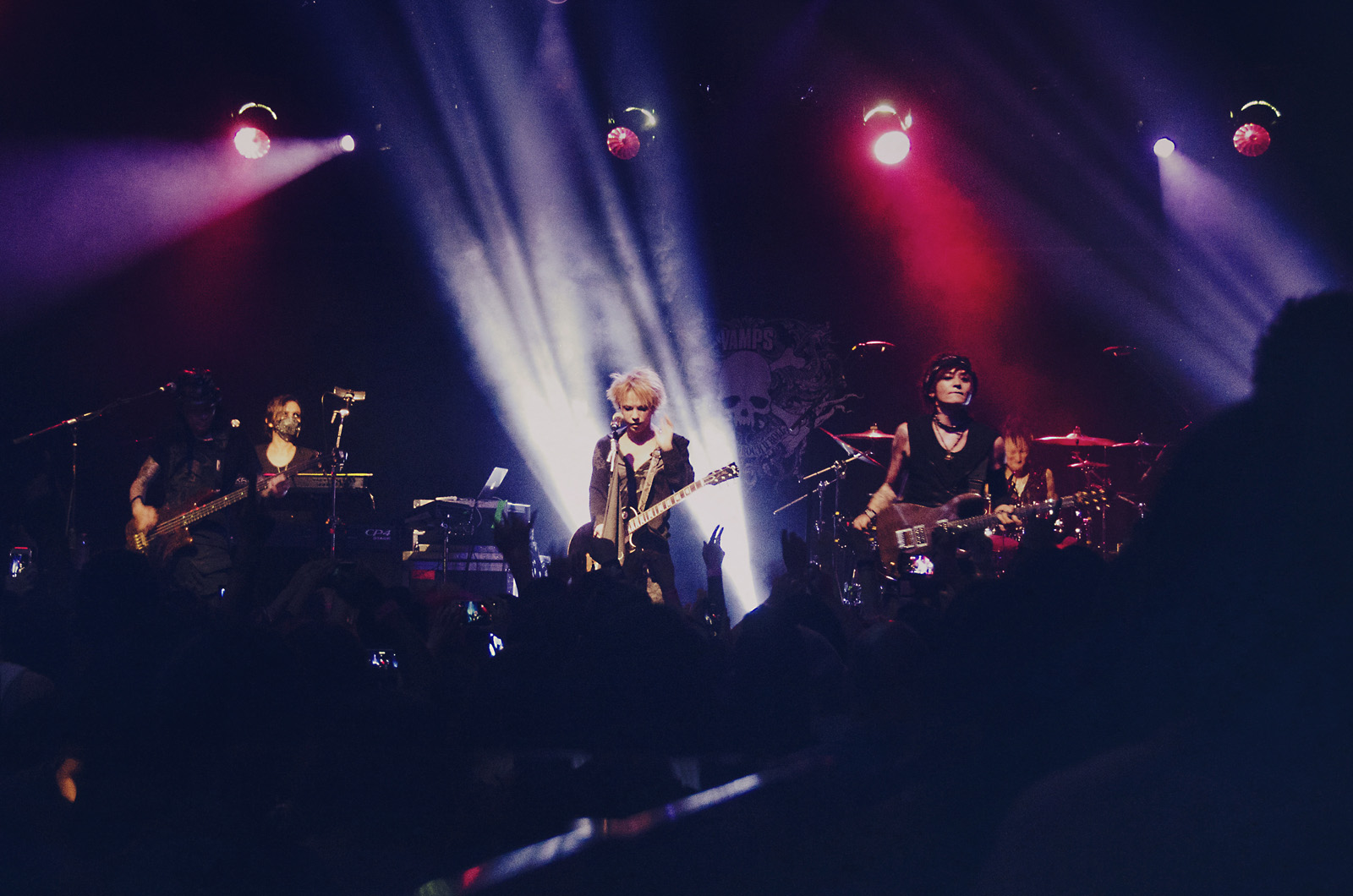 It’s the second consecutive year the band has held a headlining L.A. show on a Monday. But Monday blues can’t stop true California Bloodsuckers, as opening band Citizen Zero found out every time the crowd roared when they dropped the name ‘VAMPS’. At 9:40 p.m., megaphone-wielding HYDE, red-haired K.A.Z, and live support crew Ju-Ken (bass), Arimatsu (drum), and Jin (keyboard) started the party with the urgently intense new single “Inside of Me”. Since their last U.S. tour, only a few new songs have been released, just enough to feed the musically hungry while the band preps for a new album. While HYDE and K.A.Z. could have easily stayed home and left Americans waiting until next year, the men opted instead to return to the states and treat fans with an energetic set list built with material spanning their eight years together. The first 10 songs were relentless – that’s how long it took before they paused for the first MC break. 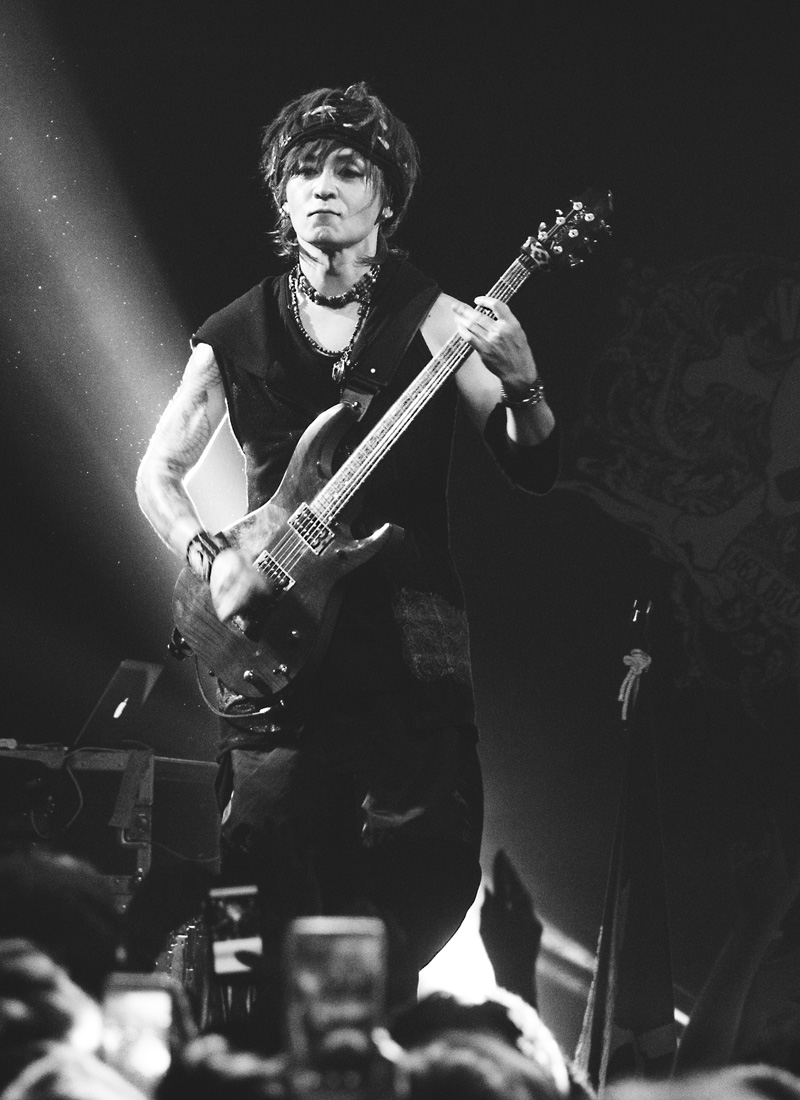 After HYDE sang non-stop for seven songs, then screamed his lungs out for eighth song “Vampire Depression”, I was convinced he would take it easy before moving on, but no – it was time to unleash the bombshell Rihanna cover “Diamonds”. At times during the song, the vocalist plugged one ear with a finger in an effort to channel his innermost RiRi. The song choice might look random on paper, but in-person their alt-rock rendition was delightfully VAMPS-y, complete with a mini-guitar solo from K.A.Z. 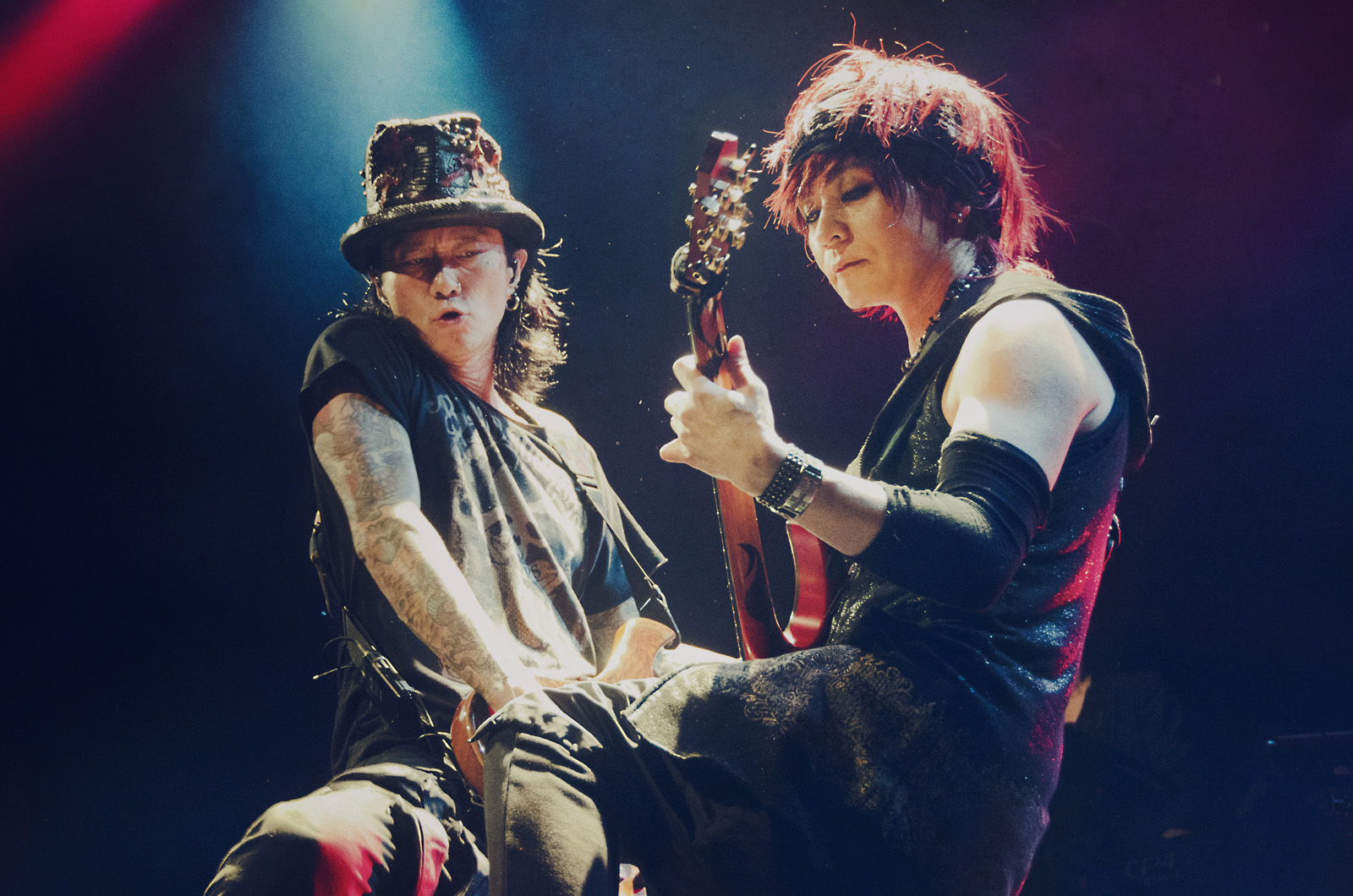 “We’re gonna do this together. Are you ready?” HYDE asked on the first MC break before jumping into “Rise or Die”. The vocalist’s voice was gritty as he sang: “One love, one war, a whole new empire/ New blood, new life, Japanese vampire” – how could you not smirk with delight at that last part? Pulling double-duty, he helped out his effortlessly cool partner-in-crime by playing guitar for “Memories” and the international exclusive “World’s End”. The most rhetorical question of the night happened during “Bloodsuckers”: “Are you all bloodsuckers?” The response? Clearly! As the main set ended, the audience instinctively recited: “Bang on stomp everybody!” Staying true to tradition, the band ended with “Sex Blood Rock n’ Roll” – The night full of the latter. 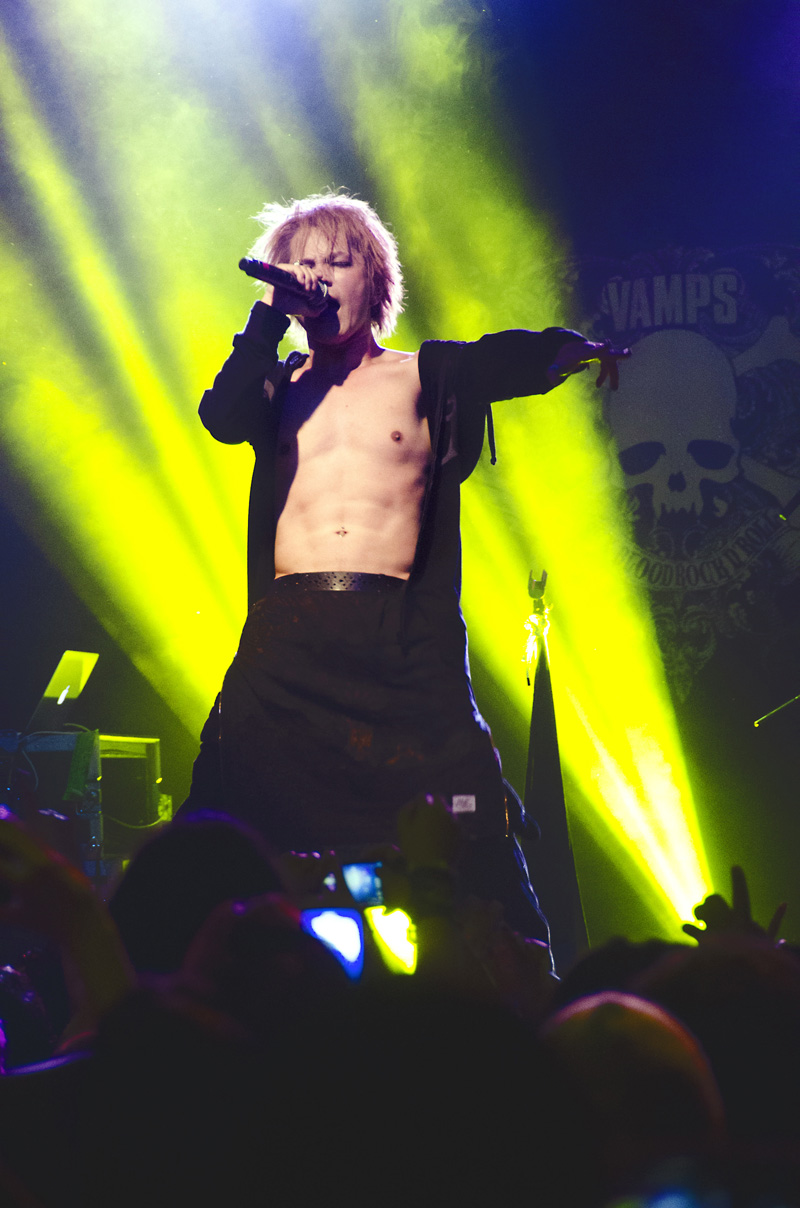 HYDE and YOSHIKI pair up for “ZIPANG”