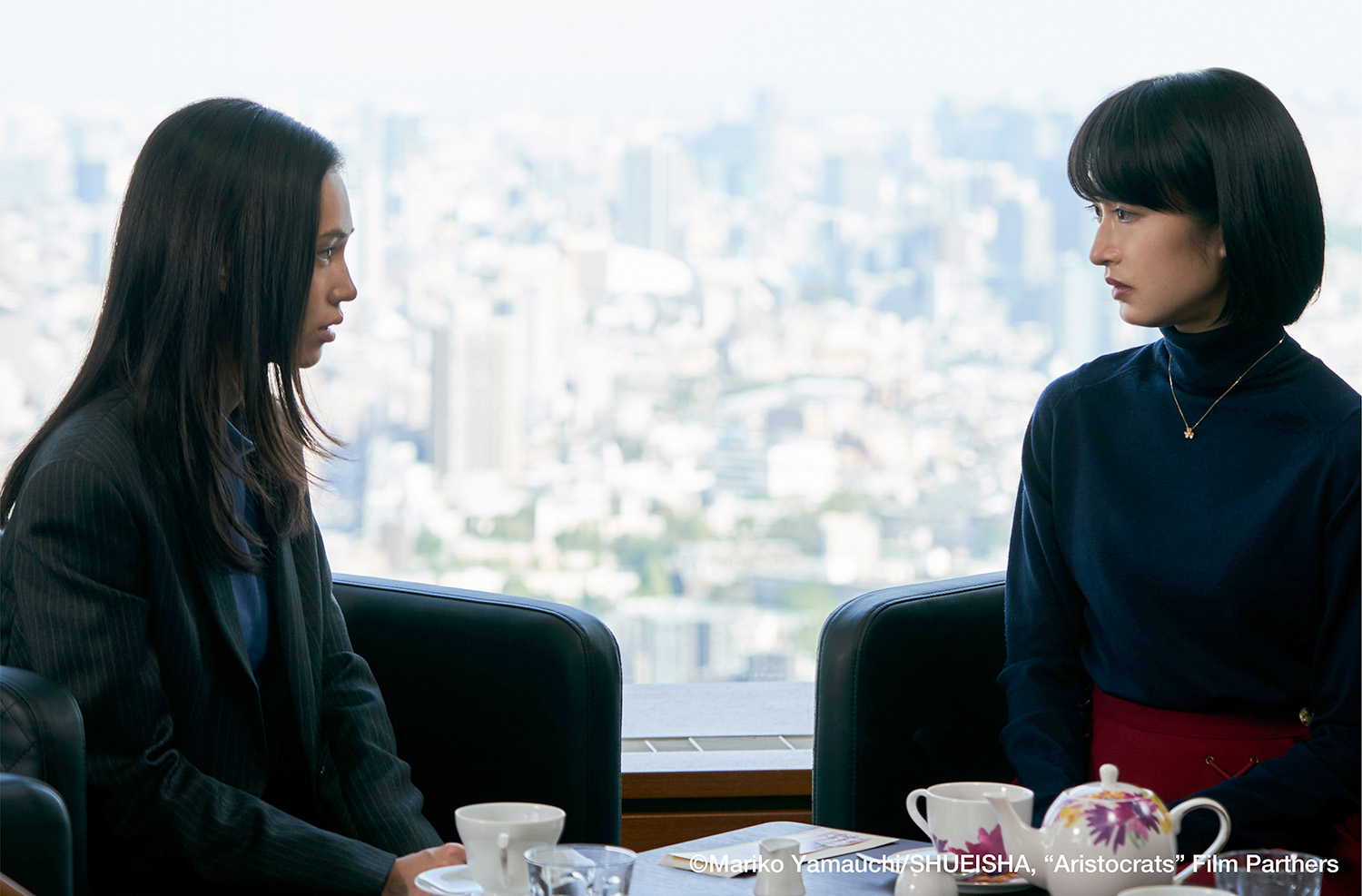 Aristocrats begins with vivid images of the bright, beautiful streets of Tokyo on New Year’s Day. Hanako (Mugi Kadowaki) is on her way to a family dinner as the jovial cab driver tries makes conversation. So many people have gone home to small towns that the city feels empty. Hanako is Tokyo-born and raised, so she only has to travel to meet her well-to-do family at a posh hotel. The family makes jokes about the casual way the other hotel guests have dressed for the holiday (“It’s like Uniqlo.”), but the joking stops when Hanako reveals her fiancée isn’t coming — they broke up that day.

Right away, the women at the table start to trash the ex-fiancée and make plans for hooking Hanako up with another suitor. Only the men — Hanako’s brother-in-law and her father — suggest taking the time to consider the young woman’s feelings. Hanako is 27, and the cultural clock is ticking. Can she really wait around for a new romance to work out and still have all the children she’s expected to? 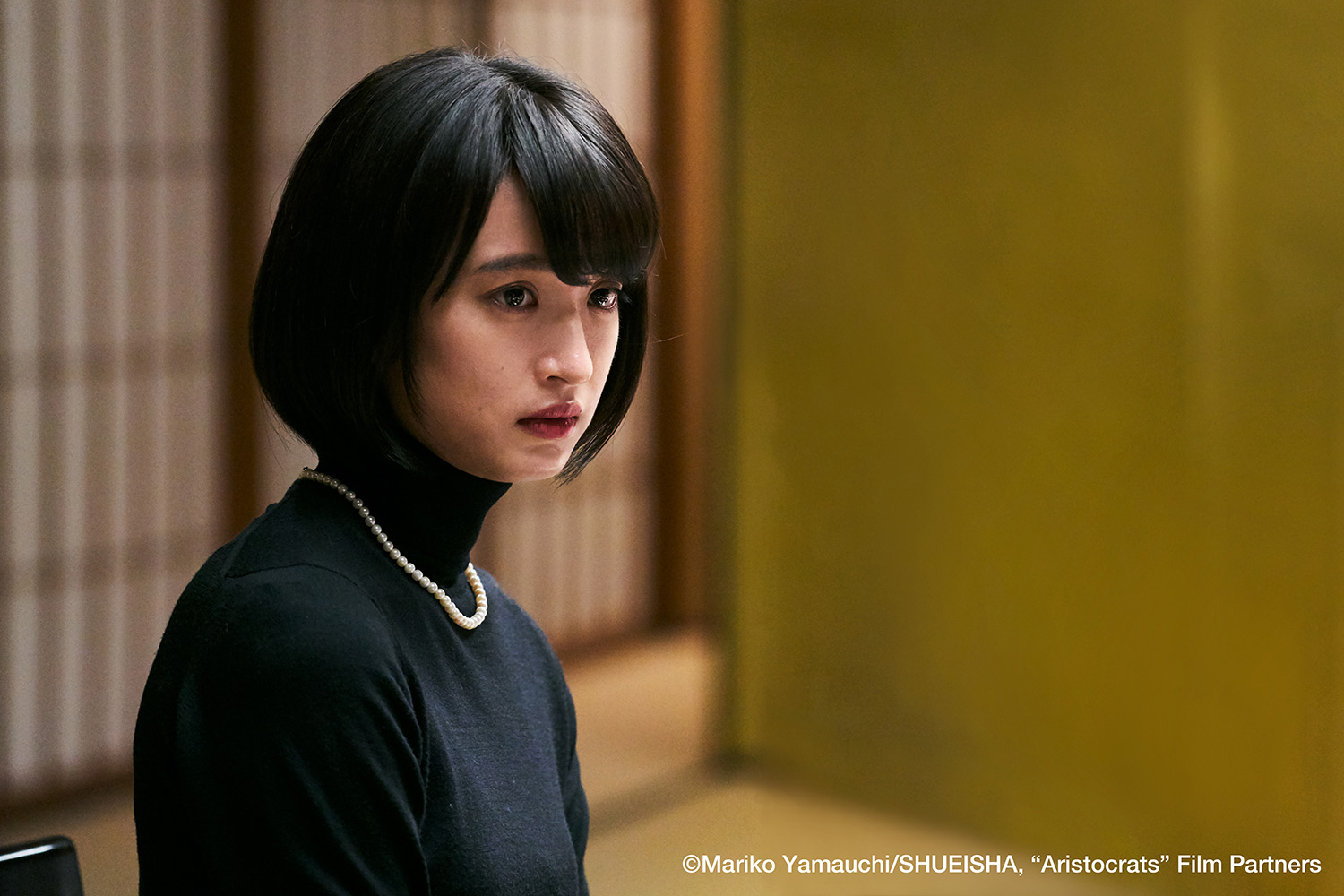 Kadowaki establishes her character wonderfully in this opening scene as she holds her head high and smiles just enough to please the family that swarms around her with plans for her future, but she shows just enough heartbreak and fear in her eyes to tell us what’s going on beneath her poised demeanor.

The series of well-intentioned setups and blind dates follows a familiar pattern, and it’s hard to feel sympathy for Hanako when she leaves behind good company just because the izakaya’s bathroom isn’t up to her standards. When she finally gets matched up with Koichiro Aoki (Kengo Kora), everything seems perfectly proper — he’s got the right look, the right job, and he picked the right restaurant. He even says the right lines: “I’m a rain man. It always rains on my big days.” Right away, he’s doing all the little things to let her know he’s a serious candidate.

Hanako is immediately lovestruck, and launches into a social media background check with her good friend, the happily single, successful violinist Itsuko (played by a vibrant Shizuka Ishibashi). The online evidence shows he’s from one of the city’s wealthy families, leading Itsuko to drop one of the film’s major themes: Tokyo is divided into sections based on class, and those people in your same class are the only ones you’re likely to meet. On a weekend trip for Christmas to Koichiro’s family cottage, she scores the engagement ring after seemingly little effort. Nearly a year after her broken engagement, everything’s back on track for Hanako — everything’s just how it should be.

But we’ve seen the movie poster, and 40 minutes into the film, we know there’s a major co-star we’ve yet to meet. While Koichiro is sleeping, Hanako sees a incriminating text message on his phone from a beautiful girl named Miki. 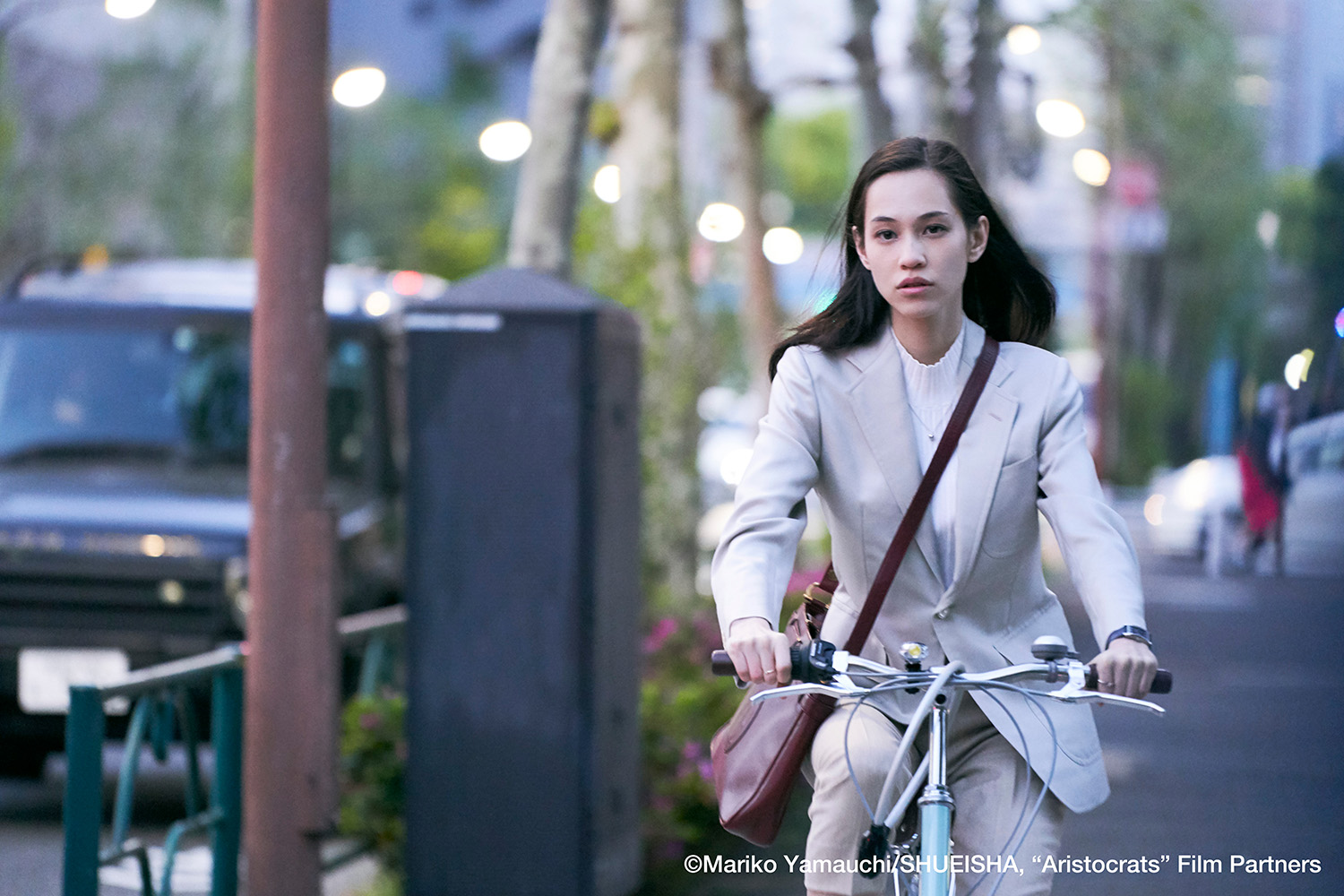 The film jumps forward a week to New Year’s Day to find Miki (Kiko Mizuhara) arriving home to the small town of Uozu. Her brother picks her up in a flashy new sportscar (check out the fur on the dashboard!) and she laments the old, run down streets — a stark contrast to the modern glitz of Tokyo that opened the film. “This town is still dead.”

Miki’s return to her hometown prompts flashbacks to her education at Keio University over a decade ago, where she struggled to be accepted by the elite in-crowd. Studying hard in her classes, she meets Koichiro who wants to copy her class notes because he’s too rich and spoiled to really care. When her educational plans are jeopardized by family finances, she supports herself as a hostess, trying to balance the late nights and long days of a double life.

In Uozu, she meets her high school friend Rie (Rio Yamashita) and they laugh at their parents fixation on marriage while their own priorities are just surviving and keeping a job. Miki and Rie lost touch during their college years when Miki finally went full time as a hostess and ended up in management. “My father bought me a 10,000 yen swimsuit to catch men at the beach,” Rie shares. Men just don’t seem to understand, it seems — but Miki, after years working in the hostess club, certainly understands men. That’s why she’s not so happy when Koichiro tries to schedule a sudden casual date with her when she gets back to Tokyo.

About halfway through the film, we’re finally set up for conflict, but director Yukiko Sode’s step-by-step adaptation of Mariko Yamauchi’s novel suffers from fidelity to the source material. Beautifully photographed, Sode’s gentle hand brings out a solid emotional truth from the entire cast. The understated performances by the lead actors are well worth your time, but the slow pace of the film’s first half demands a lot of patience. 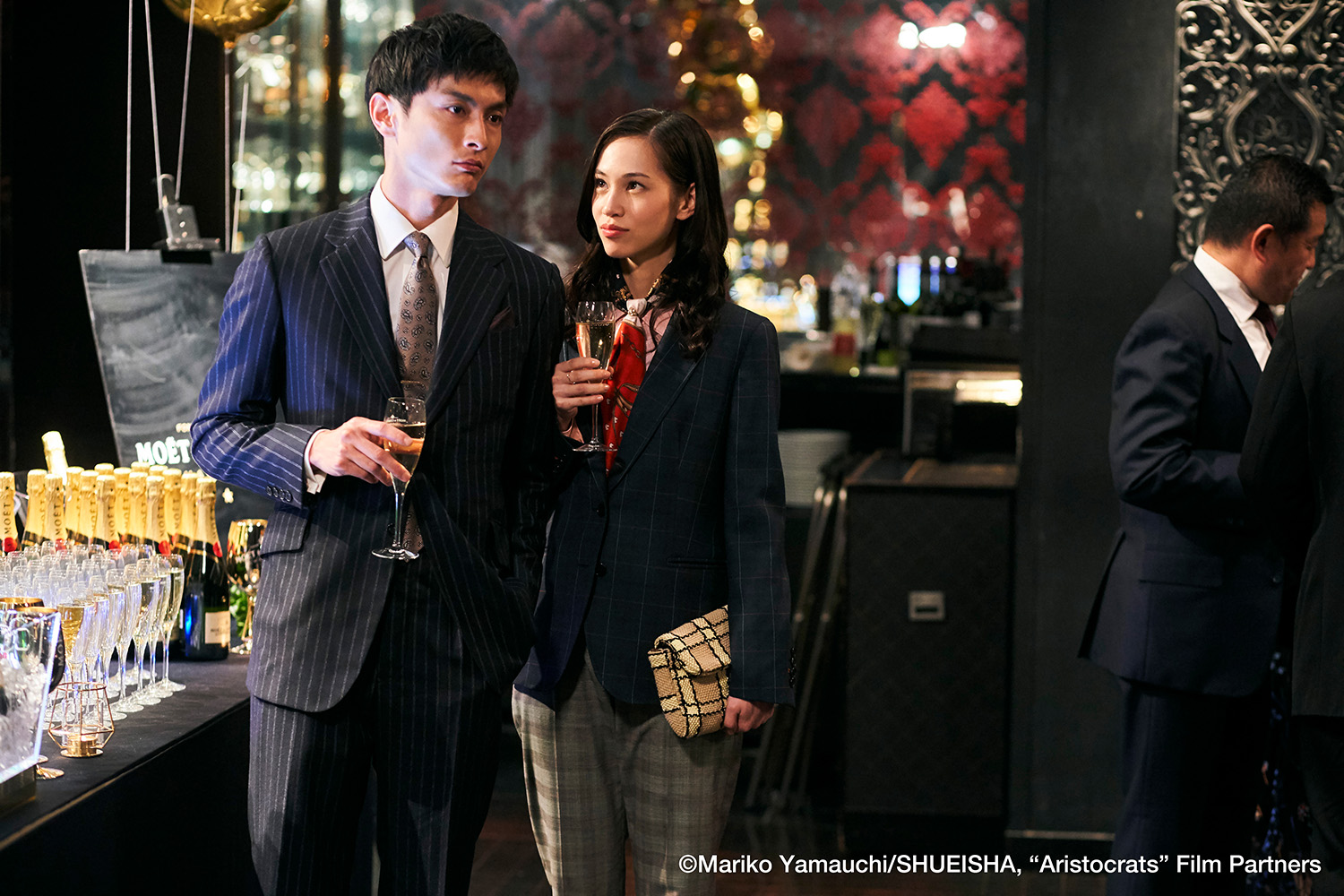 After Hanako survives a polite interrogation by Yoichiro’s family, it’s clear why she’s been chosen. No matter what his relationship to Miki might mean, there’s no way his politically-connected parents would approve a hostess joining their elite family. A chance encounter brings Hanako and Miki face-to-face to address Koichiro’s two-timing, and Miki reveals herself to be a woman of character. She breaks off the relationship with Koichiro immediately, even though it costs her a lot in the social connections she depends on professionally.

Hanako follows through with the marriage at an ornate ceremony and the couple settles quickly into domestic life, focusing on the pregnancy that’s expected by both families. As she slowly realizes that there’s nothing more for her in this life other than playing the role dictated by Koichiro’s family, her dissatisfaction grows. When she meets Miki again years later, she’s inspired by Miki’s independence and decides to finally go in her own direction. 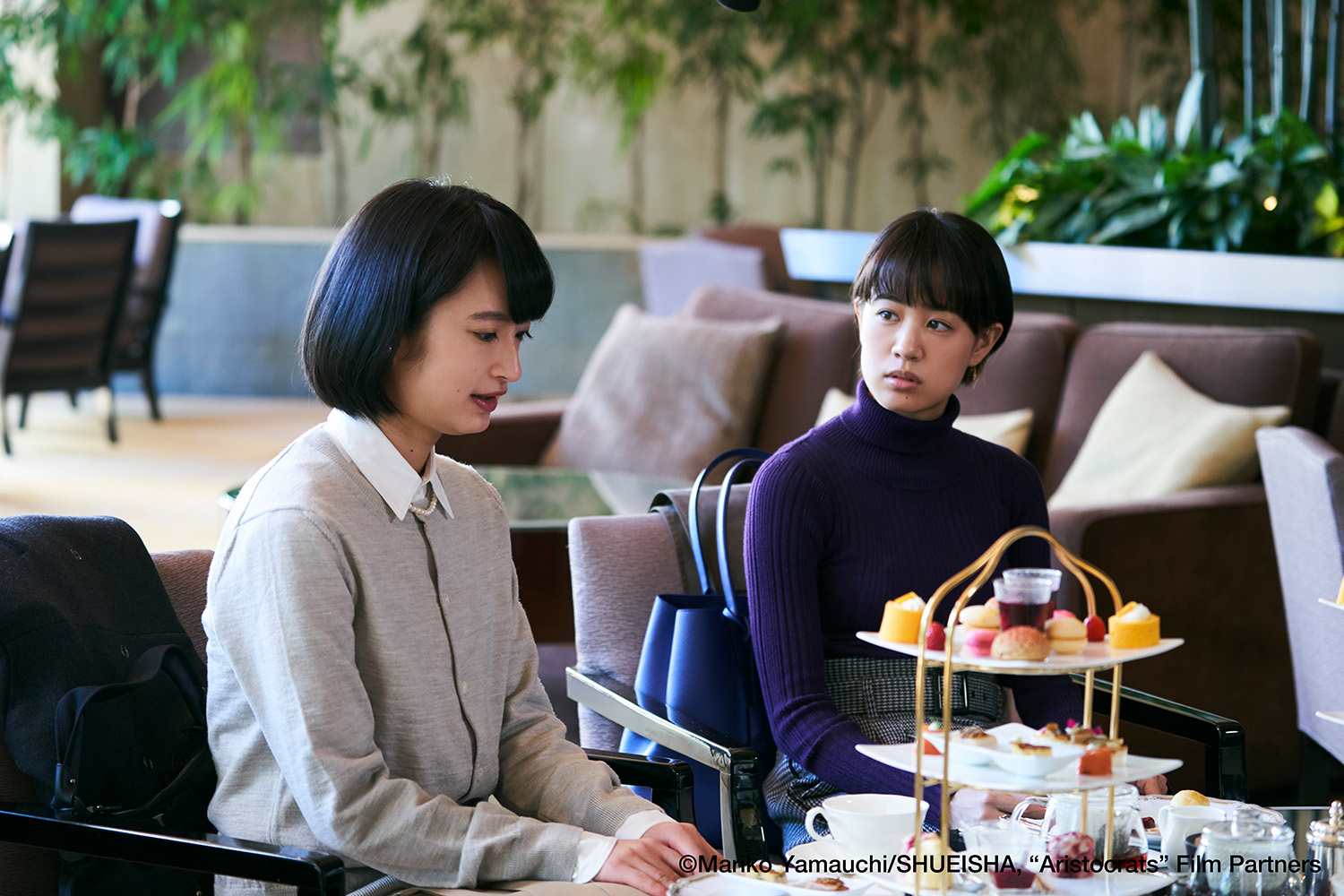 Both Hanako and Miki’s life choices come about quickly without anything to spur them to change. They just drift their way through the narrative and make changes that they could have made years ago, but somehow, for some reason, the time just becomes right. That’s true for real life, but it doesn’t make interesting drama. Koichiro never suffers any consequence for his infidelity, either.

While both Kadowaki and Mizuhara get every ounce of emotional range out of their roles, they’re trapped in a narrative that holds them back. For a film about women finding their freedom, Aristocrats keeps them pretty firmly constrained.