FLOW powers up at Anime Matsuri 2012 (interview)
by Jen Wang 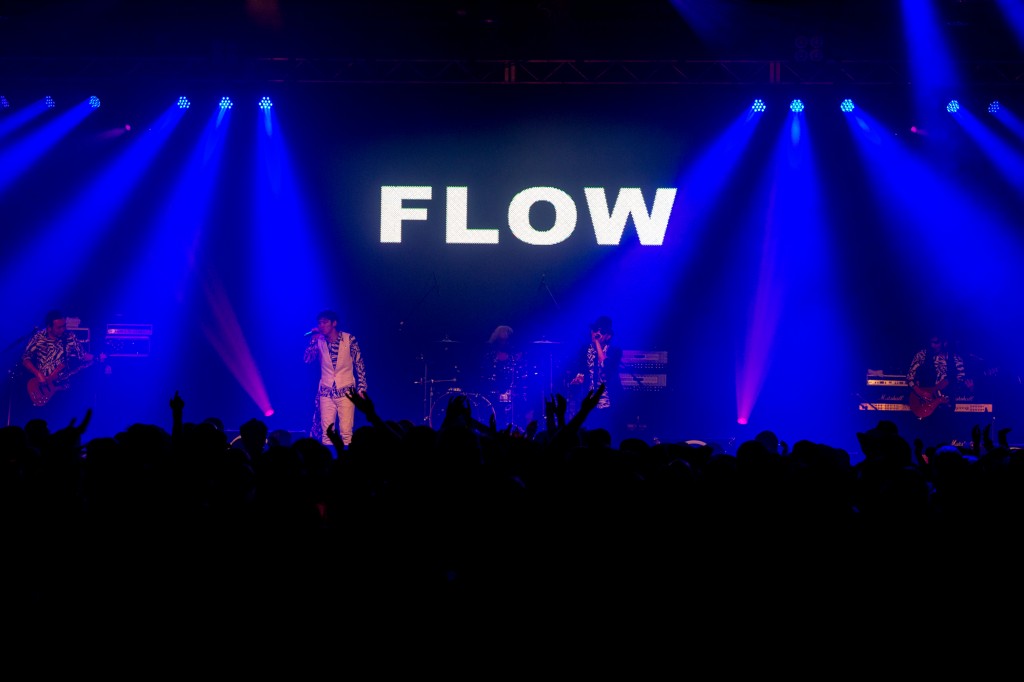 The opening to 2001: A Space Odyssey crescendoed over the chanting crowd as FLOW took the Anime Matsuri stage.  It was an unexpected yet appropriate introduction: the band had visited the NASA Johnson Space Center two days prior.  Casually picking up their instruments, FLOW proceeded to play as though it was their last performance ever.

GOT’S bass shook the room while KEIGO and KOHSHI belted their lungs out. True to the band’s name, FLOW’s vocalists traded rap lyrics as though they were finishing each other’s sentences. Sometimes their harmonies would blend into one resonant voice. TAKE milked the long guitar chords, throwing his arm in the air like an ’80s heavy metal rocker. The audience went wild over the anime theme songs, “Colors” and “Days.”

“Tabidachi Graffiti” demonstrated that the guys didn’t always crank everything up to eleven. IWASAKI’s steady rhythms prevented a total loss of moment, but TAKE’s light strumming and the stringed accompaniment did create a calming atmosphere that had the audience ready to listen to what the vocalists had to say during their MC. KEIGO talked about loving rock music and anime while KOHSHI focused on a more somber subject, the 2011 Tohoku earthquake. “I felt that music was useless because it cannot help hunger or keep people warm,” he said. “My fear from the continuing aftershocks was relieved when I listened to music. Then I realized music is power.”

Forging ahead, FLOW lifted the room’s spirits with an upbeat cover of Siam Shade’s “1/3 no Junjou na Kanjou.” Then came member introductions, where TAKE stole the spotlight by strutting to the center of the stage with light-up sunglasses. The fans followed his every command, repeating nonsense phrases and throwing their fists in the air. FLOW’s energy never waned and perennial favorite, the Naruto theme, “Go!!!,” was the perfect cap to the set. Band members jumped higher than ever, and KOHSHI led the crowd in a sing-a-long of the chorus. It left them wanting more, and one more song was what they got in the encore. FLOW really did seem to find power in their music—not just to play their hearts out from start to finish, but also to bring the worlds of anime and rock ‘n’ roll together.

FLOW’s camaraderie was evident in our interview, as one member would answer a question only to have his bandmates chime in with more details or personal opinions.  Even after a busy weekend they remained enthusiastic, with their eyes on the future.

pSKY: How have you changed as a band since your last visit to Texas in 2006?

FLOW: That was our first international show. We didn’t play any more conventions after that until the last two years. It’s probably because more people outside of Japan know us from the anime we did songs for. Before it was just Naruto.

FLOW: [joking] We also got older.

pSKY: What made you decide to become musicians?

FLOW: We liked X Japan and wanted to do the same thing.

pSKY: Have any of you received formal training in music?

GOT’S: I did, but it wasn’t for bass. Originally I played guitar.

pSKY: What are you doing to celebrate your tenth anniversary?

FLOW: We are playing more concerts. There will be a festival-style event where we can celebrate together with our fans. It will last five days, one for each of our previous albums. We’ll also have an event where we play cover songs requested by the fans. Finally, there is a countdown live on New Year’s Eve.

pSKY: You are very busy.

FLOW: Yes, we have many things going on.

pSKY: What do you think is the key to your longevity?

FLOW: The band is the ultimate balance between each other’s personalities.

pSKY: Why did you name your latest album Black&White?

FLOW: We wanted our message to be clear.  It’s like the English phrase, right?  There is no grey area.

pSKY: How do you keep such a high energy level through an entire performance?

FLOW: We get energy back from our audience. This is especially the case with American audiences. It doesn’t feel like 90 minutes.

pSKY: What is your favorite song to play live?

pSKY: Last night, KOHSHI talked about the impact of the Tohoku earthquake had on him. How did it affect the rest of you?

pSKY: For the people who have never heard your music, what song would you want them to first hear?

FLOW: “Go!!!” – The mentality of the band is compressed into this song.

pSKY: Were you shocked by how bold and direct some of the questions at Friday’s Q&A were?

FLOW: We had been to four conventions before so we were prepared. However, we were very surprised the first time we did a Q&A.

pSKY: Where do you see yourselves in the next ten years?

FLOW: We would love to keep going as a band.

KOHSHI: If I’m not in a band, I want to live in California.

FLOW: Actually we see Black&White as the beginning of the new decade for us. 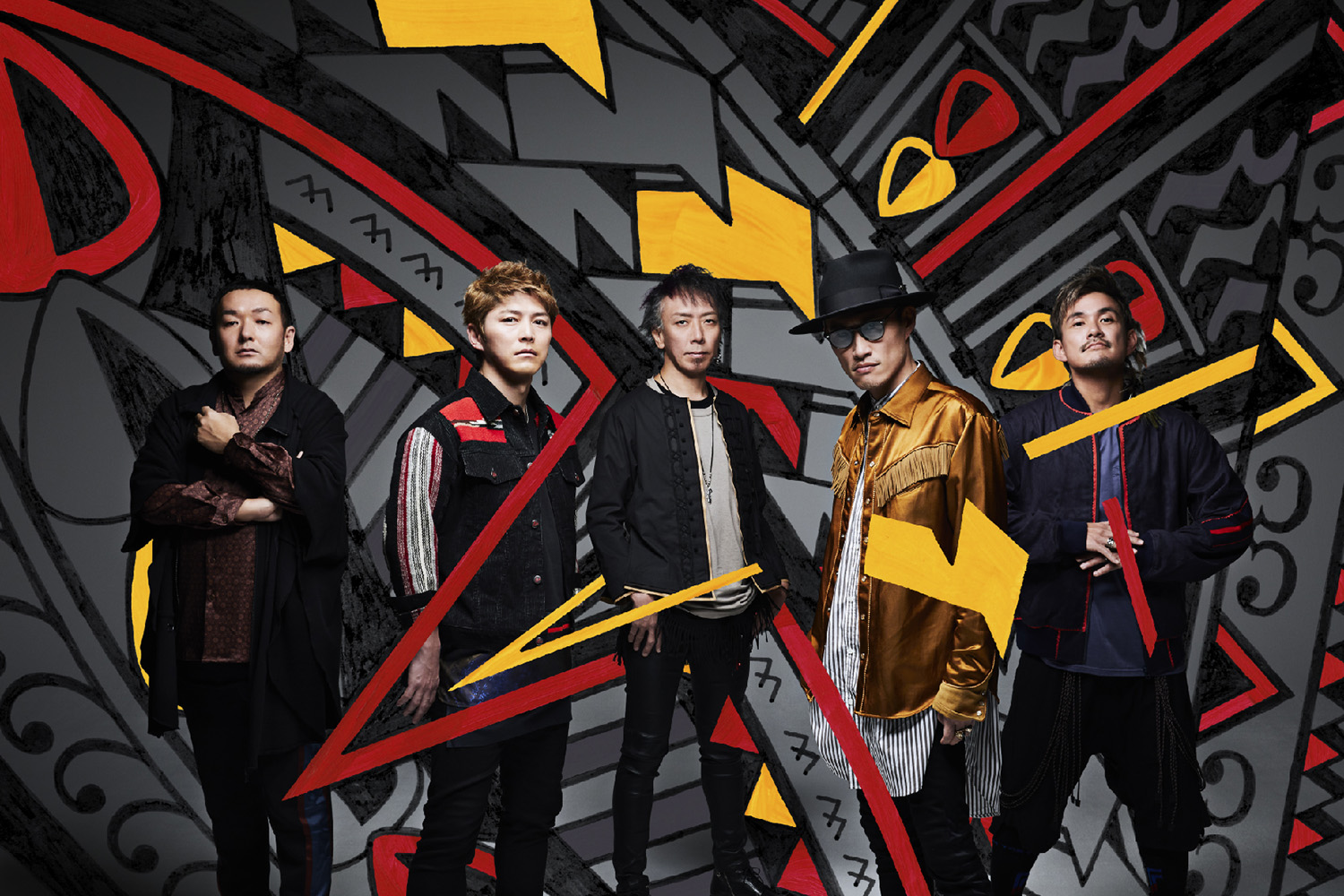