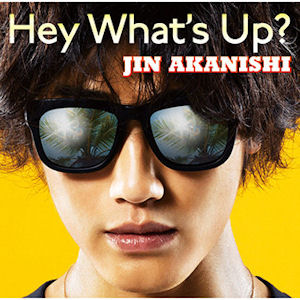 Back in March*, Jin Akanishi broke his hiatus, which lasted over a year and a half, with the release of HEY WHAT’S UP? The single anticipated the summer with the upbeat melodies and seasonally appropriate lyrics. It also marked Akanishi’s shift from R&B to dance.

The title track features light synths that convey an easy-going mood. It has a good steady beat for dancing, but it lacks a strong bass to get the energy up. Especially with Akanishi’s soft voice, this song is more suited to be background music for a party scene on TV rather than a club hit. Like the greeting, “HEY WHAT’S UP?” is modern and briefly attention-grabbing but not unique enough to be memorable.

Although “KEY TO YOUR HEART ~Kimi no Kokoro no Kagi~” also features synthesizers and a constant rhythm, it stands out a bit more. Most of that is due to Akanishi’s vocals, which are better suited for the more personal style of this song. He covers a wider range with the la-la’s and adds a sultry touch with the lower notes. The piano at the end too contributes to the overall romantic feeling.

If Akanishi wants to continue to try to break into the overseas market, “SUMMER LOVING” should be his song of choice. Not only because it is in English, but it has the most punch. Here is the powerhouse singer that fans from his KAT-TUN days have come to know. The song itself has the carefree attitude and energy that is perfect for an outdoor concert or party, and the inclusion of guitars makes it more than just a dance pop tune with some rap thrown in. It’s too bad “SUMMER LOVING” wasn’t the title track, but at the same time, this is a great positive note to end on. Unfortunately it’s not the finale, as there are instrumental versions that are nice for anybody who wants to practice for karaoke but otherwise egregious.

Jin Akanishi has successfully made three summer anthems for 2013. Whether they will last into the fall depends on the song. There is a lot of potential for more than just a J-pop comeback for the solo artist, but he’ll have to push himself more to be able to find crossover success.