exist†trace
Interview by Natalie Perez
May 5, 2014

As one of Japan’s first all-female Visual Kei rock bands, exist†trace has released multiple singles, albums, and videos, and performed in Europe and America. Just a few weeks before the release of their new single “Spiral Daisakusen”, Jyou (vocals), miko (vocals and guitar), Omi (guitar), Naoto (bass), and Mally (drums), give us some in-depth details about their visuals, music, and aspirations.

How did the members of exist†trace come together to become a band?

miko: It began with Jyou asking Naoto, who was her friend, “Hey, do you want to make a band together?” and then Mally, who was a childhood friend of Naoto, joined the band. After that, Omi and I joined from the ad in a magazine and the internet.

How did you guys come up with your band name?

miko: The band name “exist†trace” was already decided when I joined. Jyou, Naoto, and Mally gathered their ideas, and Naoto’s suggestion “exist†trace” was chosen. For myself, the name “exist†trace” means not only “to leave behind the proof of living,” but I feel that it also means “How large of an impact can I leave within someone?” and that this band is the place I can try this.

How do you feel about being a Tokyo band? Do you have a family of bands that you like to perform with regularly?

miko: I was born in Tokyo, and I love Tokyo. I’m proud that we’re a band from this unique city where many different cultures are combined. Recently, we did a tour of Japan including Osaka and Nagoya together with the band Kaishin no ICHIGEKI. There are many cool girls bands out there, too, so I want to bring more excitement to the girls scene.

What do you feel is the main theme or message in your lyrics? Has that message always been the same, or has it changed through the years?

miko: The main theme is “To live.” This hasn’t changed since we started, but recently, I’ve become more specific. I’ve been aggressively writing lyrics about hesitation and suffering, the woman’s view of life and death, different shapes of love, and my own experiences and feelings.

What bands did you look up to when you started? Are there any bands that influence you now?

Jyou: Dir en grey was the trigger for me to start a band, and I’m still influenced by them even now. I got to know Dir en grey from their anime theme song back then, and later I saw them on a music TV show. I still remember how their psychotic performance caught my attention. They’re the only ones who could put on that kind of show.

miko: At the beginning, I liked Japanese bands like Luna Sea and Pierrot. Now, I also like The Rolling Stones, Mr. Big, and Muse. The guitarists I like are Eric Clapton, Paul Gilbert, Mathew Bellamy, and Hisashi Imai.

Omi: X JAPAN, definitely. But there are many more.

Naoto: When I started music, I was listening to Marilyn Manson and L’Arc~en~Ciel a lot. Now, I’ve heard Queens of the Stone Age by coincidence, so I’m checking out more of their music.

Mally: When I started, I looked up to the Japanese band, Merry, and bands like Evanescence, Slipknot, and Bullet For My Valentine. I still do, of course, but I’ve found new influences from many different artists. I’m listening to a lot of Metallica now. 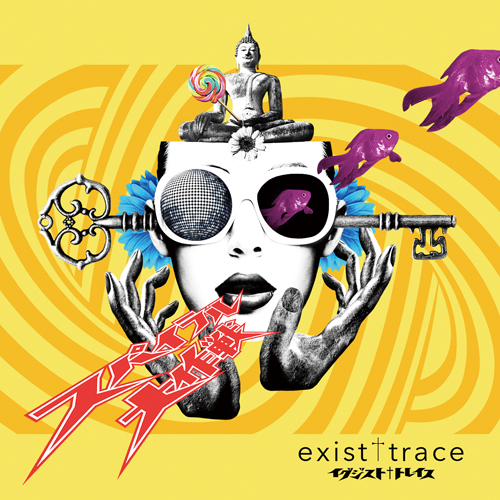 exist†trace is a band that likes to change its style, musically and visually. What song has gotten the most surprising reaction?

miko: When we released the mini album, Ambivalent Symphony, the reactions for “Owari no nai Sekai” surprised us. It was a “light”-sounding song for us at that time, so we were ready to hear, “It’s not like exist†trace!” But there were many fans who said it was moving and inspiring and that they liked this beautiful song. That’s when I realized that what’s important is to show all sides of ourselves and to create our work with love, even if it’s something that’s unexpected by the fans or even ourselves. That’s how we can stay true.

The visual style is important, too. What is a Japanese visual kei band?

miko: Visual kei creates a place where shy Japanese people can express what they usually can’t by acting as someone else. The style has been changing recently, but I still like the true aesthetic, elegant expressions of visual kei that are so beautiful.

Many of your releases have not been full albums, but shorter length, like EPs or mini-albums. Why do you like to put out shorter releases?

miko: It’s not that I don’t like full albums! I really enjoy that experience. But now, I have a stronger feeling that I want to make it easier to listen to CDs and I want people to get to know exist†trace. This is the reason why the pace of our releases and our songs are easier to buy and listen to more often.

What American cities have you performed in? What is it about America that keeps you coming back again and again?

miko: In America, we’ve played Seattle, Boston, New York, Philadelphia, Pittsburgh, and Dallas. I love America since I used to live in Dallas. I want to go as many times as possible! The best thing about America for me is the bright, happy energy of the people and the grand landscapes. America is so big, but I want to see it all!

Your fashion and hairstyles change pretty often. How do you decide what you new style will be? Is it important to change your style for each new release or video?

miko: Each of us chooses the style that enables us to express that particular song the most. Especially since Jyou and I sing, we choose the style that can emotionally connect to the lyric’s main character.

What’s unique about exist†trace? What’s the most interesting thing about an exist†trace live show?

Jyou: The unique thing is the masculine strength of our performance! We rock as hard as any male group. But, to tell you the truth, there are still quite a lot of feminine movements and expressions within our performance.

miko: Our live performance is always unpredictable. We perform a full-energy hard-rock concert, but then we can suddenly shift the performance to a theatrical style. Also, in one song we can sing about women’s destructive love & hate, and the next song is a rock song that is fresh and manly and full force.

Omi: Our band is a mix of five very different personalities. It comes out in our music, and in our fashion and appearance, too.

Naoto: It’s the fact that we have different types of songs, and our stage performance has a lot of variety. Also, we have a passionate & powerful side, and a sexy and delicate side. Women have different faces.

Mally: First-timers really go “Wow!” when they see our five characters on stage, and we really make sure they have a great time!

What are your upcoming touring/show plans?

miko: Unfortunately we don’t have any overseas live shows planned right now, but in Japan we’re having one-man live shows every month! We’re planning some really surprising and elaborate moments, so I want fans to come from overseas!

exist†trace recently released many albums worldwide on iTunes and Spotify. How do you feel knowing your music is reaching fans all over the world?

miko: I’m really excited to know that our feelings are able to reach out to the world despite the language barrier, especially because I experienced a hard time due to English problems a long time ago. I truly believe that music is wonderful. I want to deliver our music directly to our fans overseas more and more.

What is it you’d like a listener to remember the most when hearing your music for the first time?

miko: I would be happy if that person remembers how he or she feels at that exact moment, what emotions are coming out while listening to our music. Those emotions are the most important. Don’t think — FEEL! (laugh).

What can fans expect to see from you in the future?

miko: Recently, we’ve been more active, especially with live shows, so we want to visit places we’ve never been. We’d love to return to Europe or America, but we’re hungry to perform in even more places. Our dream is a world tour!

Any final words of wisdom?

Jyou: When we have a live show in America next time, I want to see all of you who are reading this! I’ll be happy if we could have the hottest, most passionate time with our music together!

miko: We’re always working hard, thinking that, even though we are powerless Japanese women, “We do not want to lose to macho male bands!” We’ll continue to deliver what only we can do and what only we can express to you all over the world. To start with, I want you to listen to our CDs and get to know us! Then, if you like us, we’ll see you at our live show someday!

Omi: I want to have a live show in America again, and I want to heat up the body and mind with you together.

Naoto: I really hope to be invited back to America soon. I want you to wait for us while you listen to exist†trace music. I really love America with passionate spirit.

Mally: I want everyone in America to feel our best, hottest music! When we go to America again, let’s enjoy the music and dance together! See you again soon!