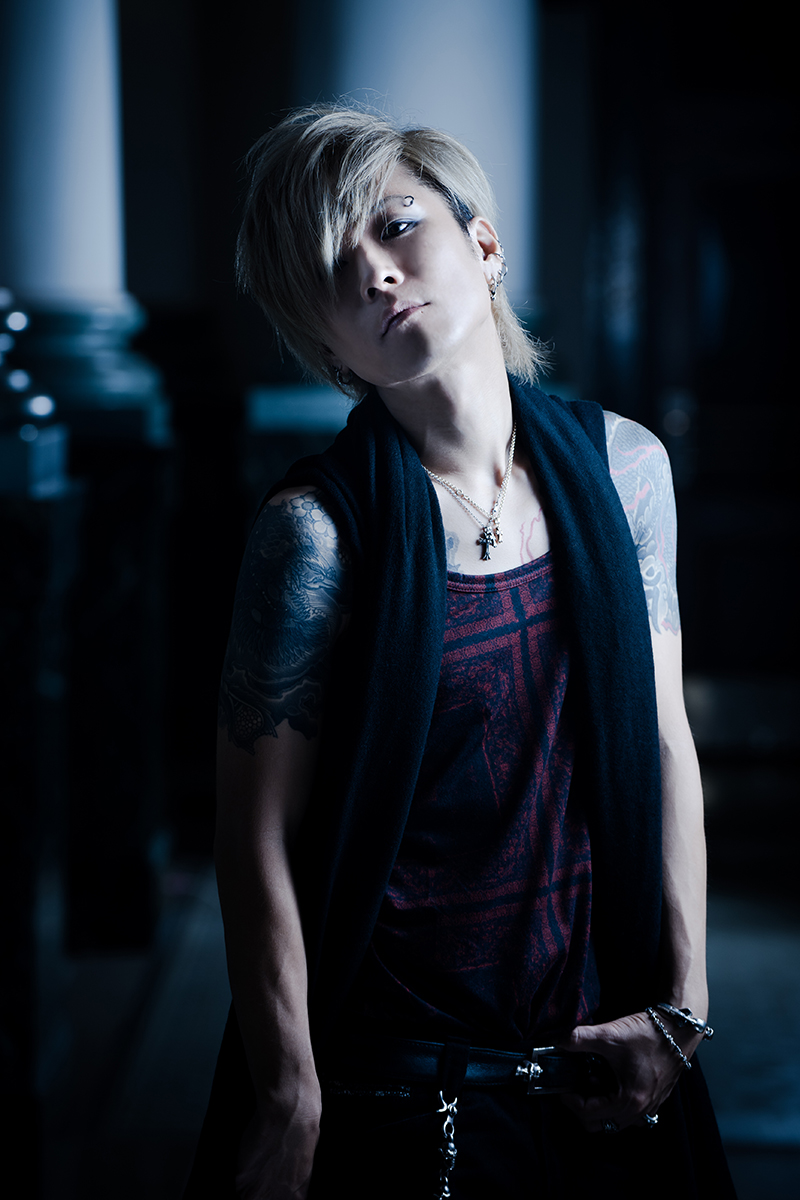 RHEDORIC is a rock group made up of some familiar faces: guitarist Yusuke Suga (ex. 12012), guitarist TOMO (ex. Deflina Ma’riage), bassist Shigure (support for Kamijo), vocalist Yuji (ex. Carat) and it was recently announced on November 9th that drummer Naruka (ex. Carat) would be joining them as their official drummer after their original drummer left in March. They made their major label debut this October with Universal Music Japan, releasing a second press of their first album, “Jiggy”. The band is getting ready to release a second album on December 23rd, called “Garyou Tensei”.

I caught up with TOMO after his meet and greet at the Cure Magazine Shop, XENON, located in the Little Tokyo district of Los Angeles.

Congratulations on your major label debut! You’ve been in several indie bands already. Do you feel a difference between being indie and being major?

TOMO: Thank you very much! I already feel a difference. Going major, the pace is quicker and there’s a lot of people that come in to support us now, so I feel a bit of pressure. I feel like I have to work hard.

Like taking care of your band and your staff?

Each of the band members have a history of playing with other groups. What made you and Yusuke get together to start a band?

TOMO: Before Yusuke quit his previous band, we were already drinking buddies. We talked about our hardships and through that, we felt a similar connection through what we wanted to create soundwise. Something just clicked.

You each came from different genres of rock, like visual kei.

TOMO: Rock is the core, but we also knew each other personally, so a new blend of musical styles came out when we played together. We’re all very proud of each other.

The second press of your first album Jiggy came out in October. The album title is unique for a rock group. Why is it called “Jiggy”?

TOMO: [Laughs] There isn’t a deep meaning to it. Originally, we wanted to use a slang word that was easy to say. We didn’t know this word until we heard it from people around us saying that it meant “Cool”. Because we think this album is cool because of its mixtures of sounds, the word fit.

Did you learn that word in America or Japan?

TOMO: In Japan! Before our show, we were waiting for our live to begin and searched on our phone for words that meant crazy or cool. That’s when someone suggested “jiggy”.

What’s the reason for having pelicans on the cover?

TOMO: When we released our first press album, we hand made it, the whole case, cover, everything. Since we already did what we wanted for the first press, we gave the art designer the album and told him whatever you imagine after you hear it, design it. None of the band members ideas are in this album cover, we just trusted the art designer.

Oh, interesting, I didn’t expect that!

TOMO: I haven’t told many people about this story! The members kind of didn’t know what bird it was at first. They thought, “Oh, is it a crow, a pelican, a dove?”

I wasn’t sure what bird it was either, since the bird on your album is black.

TOMO: At first the pelican was white, like a swan. But we didn’t think the white matched our image, so we thought black would be better.

The album is a rock album, but it has a lot of different sounds to it. “Monster” is electronic and “Wake Up, Stand Up” has elements of punk. Because of the varied mix, what is the song writing process like?

TOMO: About 70% of our material is written by Yusuke and about 30% from me. Then whatever the members bring, we work on it together. With bands, usually each member will bring in songs and then as a group choose what’s good or what’s not good. With us, we don’t have any songs we think aren’t good because we trust each other. Because of that, there’s a different type of color on each song, so we don’t stick to one type of genre.

TOMO: The song that just came up “Monster” and “Wake Up, Stand Up”, actually. I love the audience’s energy during those songs. They start moshing and create a circle pit.

Do you jump in with them?

TOMO: Yusuke and I jump down the stage and join.

And then you don’t go back up…?

TOMO: I do go back up on stage, but I get burnt out! [Laughs]

Yuji was injured earlier this year so the band had to go on a break for a bit. What did you and the rest of the band members do during this period?

TOMO: When I heard Yuji got injured, we were really nervous about the timing because we were really busy at that time. We announced through our official site that Yuji got injured so we had to cancel a lot of stuff. We were worried, but we told Yuji to get back to being 100%, so while he recovered, we focused on getting prepared for Yuji to come back. When he did come back, we didn’t tell everyone when he would come back, we wanted to surprise everyone so we kept it a secret. It was awesome the day Yuji came back.

You’ve been to the U.S. many times both for personal time and to perform. What is it about America that has you coming back?

TOMO: I do really like Japan, but coming here and meeting new people is a good cultural shock for me. It’s something different. It becomes a source of energy for me.

I bet you’ll eventually want to bring the rest of the band out?

TOMO: Since I came out with our vocalist Yuji last year, we told our members how it was, so they’re really curious and want to come out as well.

You guys are quite busy! You’re coming out with a second album, Garyou Tensei, in December.

TOMO: We were taking our time, and going according to our schedules, but we decided to throw that slow pace away and get busy. We’re really happy about being musicians and we want to stay busy and surprise people.

What are your dreams for the band?

TOMO: As a band and as individuals, we have different dreams. It’s hard to say now that we are a five piece band again, but until we move forward, we’ll know better what that is. In a good way, I don’t have a clear dream for the band yet because if the dream doesn’t come true for the band, we can keep going. Not being able to make that dream come true, but working towards it is important. Once the dream is fulfilled, that’s what causes a band to break up. Probably the rest of the band would say the same thing: We want to keep climbing.