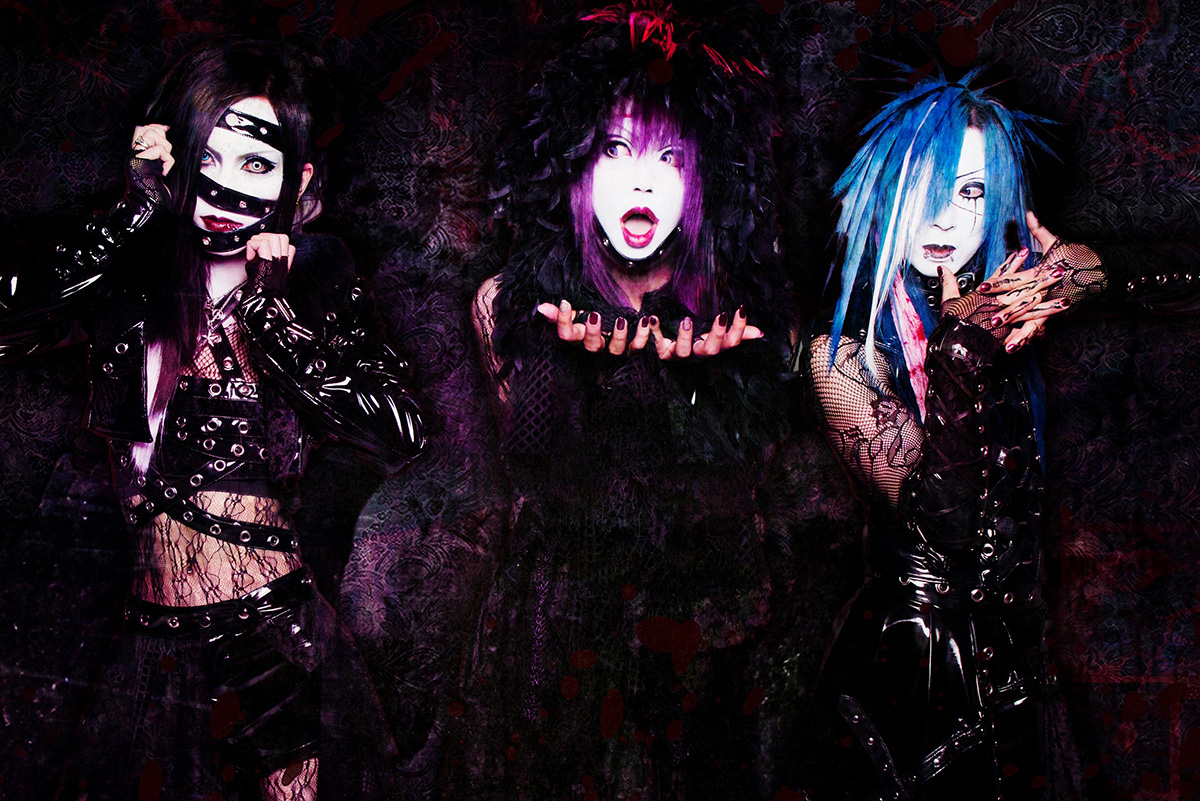 La’veil MizeriA, a band that officially began activities in 2013, is known for their distinctly 90’s visual kei look and sound. Recently, they became one of the newest additions to the Starwave Records family, and they’ll be releasing their first mini-album under the label on June 28th.

In La’veil MizeriA’s first ever interview, you can read about the band’s beginnings, what made them join the Starwave family, the creation of their first mini-album, and more.

-Could you tell us a bit about La’veil MizeriA’s concept?
kikyo: Our concept is basically a story of cruelty and cowardice.

-It seems like you have a lot of 90’s visual kei infleunces as well.
kikyo: Yes, we have a lot of 90’s influences.
jaki: Our lives are, in short, crazy. However, we also have a style that’s not around anymore in this day and age. Even when it was in style, there were only a few bands that play in the 90’s style that we do. I want us to be valuable to people who like that style.
Even in visual kei, there are trends, right? That’s an obsolete way to go about music. I think that kind of trend should stop.
In opposition to that, I try to create what I see as “true Visual kei.” It’s not fun if everyone is doin the same thing, right? Even if we seem outdated, I think that’s okay.

-Could you tell us the meaning behind your band name?
kikyo: The band name has the same meaning as our concept. When we came up with the name, we looked at a bunch of words. We wanted it to look nice written out, and I personally wanted to start with “La.” We thought “La’veil MizeriA” best encompassed both the meaning and appearance we were aiming for.

-How did the (current) members meet each other?
kikyo: jaki and I have known each other for a long time.
jaki: Yes, we go way back. We’re from the same area. Sometimes we played in different bands, but sometimes we played together.
kikyo: You could say we reunited in Tokyo. As for miria, it was as if the gods led us to each other. It was destiny.

-You’ve had a few member changes since you officially began activities in 2013. How do you feel about the current lineup?
jaki: I feel really good about our current lineup. We share responsibility depending on the situation, which is really great.
kikyo: Yeah. I think this is the best lineup we’ve had so far.

-You recently joined Starwave Records. What triggered the decision to make this move?
kikyo: We’ve been acquainted with Starwave for a while, and the timing seemed right.

-We’d like to ask about your first mini album scheduled for release on June 28th, “Jakumetsu Kyouen.” (寂滅饗庭) What sort of concept does it have?
kikyo: All of the songs revolve around the theme of “death,” in both a positive and negative light.

-Are these all completely new songs?
kikyo: We’ve been playing “Necrosphere” at our shows, but this is the first time that all of the songs will be available on a CD.

-So, you haven’t played the other songs at shows yet?
kikyo: We played “Jakumetsu Kyouen” for the first time at our 2-man show a few days ago.

-Please tell us a little about each song on the mini album.
1. Shien (死宴) & Jakumetsu Kyouen (寂滅饗庭)
jaki: miria had already written “Jakumetsu Kyouen,” and then I asked him to create an SE that would fit that song.
miria: This was… my first opportunity… to write a song… for the band. I didn’t want… to ruin the… MizeriA vibe… we had until now… but I also wanted… to show fans… something new.
Jakumetsu Kyouen… is pretty heavy… so I wanted… to make this SE… sound beautiful.

-How did miria do on his first songwriting job?
jaki: In the demo stage of Jakumetsu Kyouen, it was pretty messy and difficult (laughs). So I helped out a bit with the arrangement to make it easier to listen to. As for Shien, I left that completely up to miria. He made the piano parts really well and it turned out to be a great song.
kikyo: When I first heard the SE, I thought it was a perfect theme for the album, death. I hadn’t even told miria about that being the theme, so I was really impressed when he made such a fitting opening for the mini album.

3. siva
jaki: I wanted to write this song in a key we haven’t had before. It’s more of an atmospheric song than a heavy song. In the end, it turned out to be a song that echoed that 90’s visual kei feel while also sounding like my own unique style.

-What do you do to create a 90’s sound?
jaki: I create it with things like the sound of the guitar, the phrases… It’s music that I’ve always listened to, so you could say it’s ingrained into me. (laughs)
I wrote the melody (for “siva”) in a certain key, then kikyo helped arrange it until it became a really good song. It sounds more like a band song.
kikyo: jaki’s songs are always difficult. They’re very particular.

-You mean they’re difficult to sing?
kikyo: Well, his melodies are very specific. This is true about musicians in the past too, but sometimes you’ll hear a song and think, “Oh, I know who wrote this song!” It has a unique style. With jaki, even if he writes a song in a different key than usual, you can immediately tell, “Oh, this was written by jaki.” He has a really particular style.
jaki: People have been calling me “particular” for years. (laughs)

4. Utakata (泡沫)
jaki: For this song, I wanted to create a song that hasn’t been heard before in MizeriA before, while still keeping that 90’s feel. It’s our brightest song…
kikyo: It’s poppy and catchy.
jaki: But it’s not overly bright. There’s some pain mixed in there.
kikyo: In the lyrics, someone dies. The song may be bright, but in the end, someone dies. I tried to balance out the brightness [with the lyrics]. (laughs) It was kind of an adventure.
jaki: Yes. I haven’t had much experience writing brighter songs, so it was a challenge. How positive can I make this without killing MizeriA’s style? I wondered. We decided that this song is our limit.
kikyo: I think we struck a good balance.

5. Necrosphere (ネクロスフィア)
kikyo: I wrote this song. I made it heavy and crazy.

-In the lyrics as well?
kikyo: Yes, the lyrics, the music, and even the fans at shows are crazy when it comes to this song.

-This is looking a little further ahead, but do you have any special plans for your upcoming one-man on August 9 at Ebisu club aim?
kikyo: For now, we’re planning on giving out a free CD to all attendees.

-Is it a new song?
kikyo: No, it’s not new. We’ve played it at shows before. It’s a bit rare, though.
jaki: We don’t play it at shows very often.
kikyo: Following the release of our mini-album, we’ll play the songs at it on our accompanying tour. At the final one-man show, I want to show everyone the progress we’ve made on performing those songs.

-How would you describe a typical La’veil MizeriA show do someone who’s never seen you before? What sort of performance defines the band?
kikyo: Until recently, I’ve mostly focused on trying to make our shows as crazy as possible. But recently, I’ve also begun to focus on expressing the meaning of our songs as well.
There are a lot of fans who like going crazy at our shows, but there are also people who don’t enjoy shows that way. I’m trying to find ways to move and express themselves so that people who’d rather just watch can enjoy the show as well.

-On a different note, it seems like you have a lot of overseas fans.
kikyo: There are a fair number that are curious about us, from different countries.

-Fans that come to your shows?
kikyo: No, there are a lot of fans on the internet that say they want our CD’s.
miria: Our international versions…are all…sold out.
kikyo: They sold out fairly quickly.

-Where do a lot of your overseas fans live?
jaki: They’re from all over the world.
kikyo: We get a lot of messages from a lot of people in Chile…
jaki: South America.

-Which country would you like to visit the most? Both personally and as a band.
kikyo: Personally, I want to go to a more southern, tropical country. I want to go somewhere with a beautiful, blue ocean.
As a band, I’d like to go to Europe or South America, where there’s a lot of demand for us.
jaki: I want to see the different kinds of architecture in Europe as well.
miria: I want to…go to…Sweden. Many…of the bands…I watch…on YouTube…are from…Sweden.

-Many fans both in Japan and overseas use social media as a method for keeping up with bands and members they’re interested in. We were a little surprised to find that your Twitter account is kept private, kikyo. Why did you decide to do that?
kikyo: SNS allows you to check out things pretty easily, right? I think there are good sides to that, but there’s also a bad side. I feel like information that you’re not particularly interested in goes in one ear and out the other.
But by making my account private, it means you have to make some sort of effort. People who apply for permission to see my account actually want to know what’s going on. They’re the only people I want to pass on information to.
I think effort is really important. I think it allows you to feel and experience more.
In our day, there wasn’t anything like SNS. It took a lot of effort to hunt down information or music about bands.
But because of that hard work, I remember and cherish the information I found dearly. That’s what I want our fans to feel.

-What are some of your goals for the rest of 2017?
kikyo: As a band, I’d like to put out one more release. I’d also like to play in other parts of Japan.
On a personal level, I want to work on expressing myself and our music in our shows more thoroughly. I also need to work on my stamina… (laughs)

-With exercise?
kikyo: Yes…with exercise.
jaki: I want to develop my guitar playing style a bit more.
miria: I’d like to give each and every show my all.

-Lastly, please give a message to your fans and our readers at S-T.net.
kikyo: If you send a lot of messages saying “I want to see La’veil MizeriA! They’re awesome!” to our label, there’s a possiblity that we can go overseas for a show. Each and every one of your voices is essential!
jaki: There are a few bands on our label that have gone overseas before, so if we have a lot of support, I think it’s possible.
miria: Come see us… in Japan!