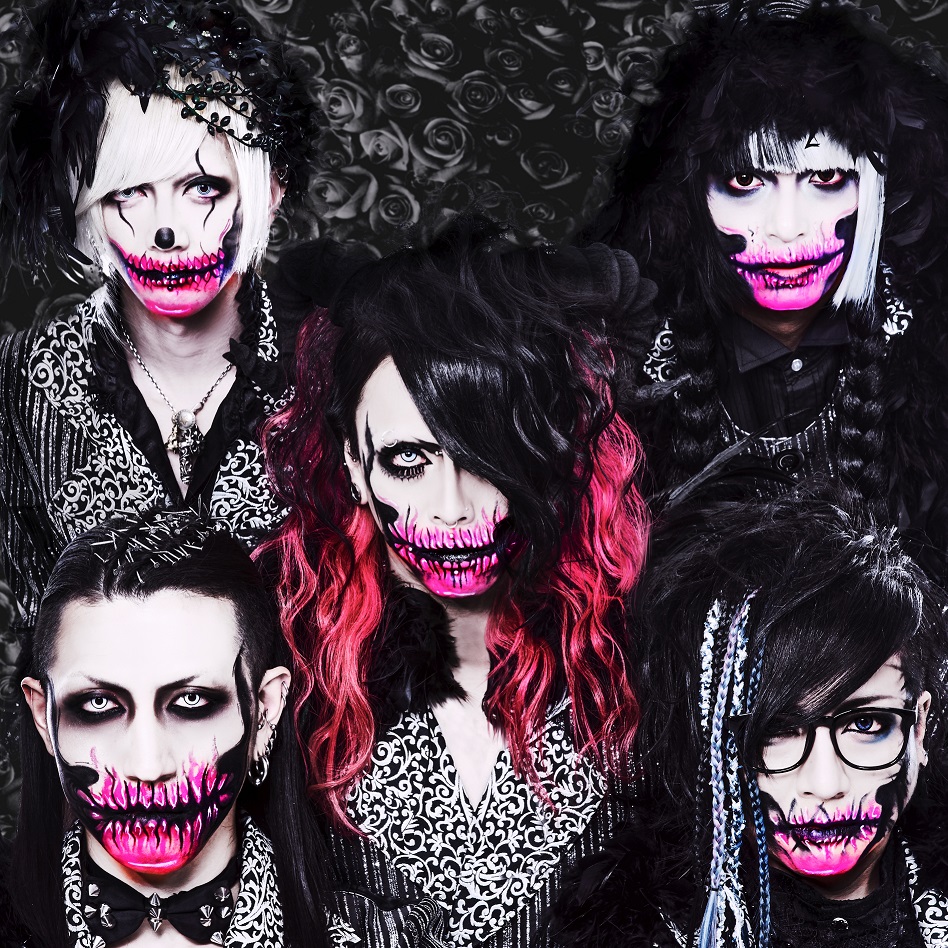 If you’ve heard of THE GALLO, it’s probably because you’ve heard something like “their fans bring plates and spoons to shows,” or “their lyrics are obscene.” It’s not a secret that they have quite an overseas fanbase, and they’re dying to know more about the band.

In this interview with THE GALLO, the band talks about their secret to overseas success, their upcoming single release”KERBEROS,” and exactly why fans bring plates and spoons to concerts. Read until the end to find out how to listen to “KERBEROS” before its CD release on March 14!

-I think a lot of our readers already know who you are, but for those who don’t, please introduce yourselves.
Jojo: I’m Jojo, the vocalist.
Nov: I’m Nov on guitar.
Wajow: I’m Wajow, also on guitar.
Andy: I’m Andy, the bassist.
Kaede: I’m Kaede on drums.

-Could you tell us the meaning of your band name?
Jojo: “Gallo” means “rooster” in Italian.
I’m not quite sure how to phrase our concept, but it’s like a combination of a deep mystery, the ultimate nightmare, or demons that eat your dreams.
We’re defined by a lot of things, but I think the concept of “nightmares” is strongest.

-Why did you decide on a band name like “THE GALLO?”
Jojo: We like how it sounds.

-We know THE GALLO has a lot of fans overseas, but there probably aren’t a lot that are fluent in Japanese. You also use a lot of difficult phrases and kanji (Chinese characters) in your song titles and lyrics. Despite all this, why do you think your band has so many fans abroad?
Jojo: Because we’re hard to understand. Because we use a lot of kanji.
Kaede: Since we’re so hard to understand, it makes them want to know more.
Jojo: I’m not sure how interested they are in kanji specifically, but I’ve wanted to prioritize the Japanese language since we started the band.
We don’t use English in our lyrics. It’s not like we use absolutely no English, but we’ve consciously tried to avoid using much English. So that’s why you don’t see a lot of it.
We also use a lot of words that even the average Japanese person doesn’t use.
Kaede: I will say that I think you shouldn’t get tattoos of our lyrics, though.
Everyone: (laugh)

-Are there fans that do that?
Kaede: Not yet. It’s just that from a Japanese perspective, we write a lot of outrageous things in our lyrics. You probably shouldn’t get tattoos of them.
Jojo: Like “Feast of Infamy,” haha.

-We’d like to talk about your single being released on March 14, “KERBEROS.” What sort of concept did you decide on?
Jojo: Cruel love songs.

-Does that go for all 3 tracks included on the single?
Jojo: They’re all basically love songs. They’re totally different from songs you hear on the radio or TV, though.
I think there are a lot of ways that you can express yourself, and as THE GALLO, we express ourselves in our own unique way.
That doesn’t only go for love, but I think love is at the heart of it.
The message of “KERBEROS” is “I ate you because I love you.” If you carefully read and look up the meaning of the lyrics, maybe you’ll understand what I’m trying to say.

-So it’s kind of a crazy message?
Jojo: It’s not that out of the ordinary for my lyrics. We say that we eat dreams, sadness, and pain, so one way to express that affection is by eating all of you. Because I love you. I wanted it to be the cruelest expression of THE GALLO.

-I see. Did you try anything new or different with this single?
Jojo: We tried to change up the way we perform things.
Kaede: How we express ourselves.
Wajow: A way of performing that we haven’t done until now.

-Can you give us any more than that?
Wajow: It’s not exactly the craziest song we’ve played, but it has a different kind of crazy from what we’ve had before.

-Please tell us about the next track, “Kaichuu.”
Kaede: This goes for all songs on the new single, but we spent more time working on these songs in the studio compared to previous works. We did that on purpose. We thought it would give us better results if we took the extra time.

-How do you think it went?
Nov: I think it went great. We get more ideas this way, as opposed to having only a little time to finish things. I think that’s reflected pretty well in the new single.

-Now for “Shingei-gata Sensuikan -Kokugei-.”
Andy: I usually make songs on my laptop, but this time I made it using my iPhone.

-Did you use an app for it?
Andy: I used GarageBand. It was easier than I thought. The song isn’t that bad.
Kaede: It’s like an ad for Apple.
Everyone: (laugh)

-About the title – we did a little research and found out there’s a fictional submarine in Shinsaku Hirata’s novel with the same name as your song. Is there any relation between the two?
Jojo: No, I thought of that on my own. It isn’t a normal way to name submarines. They’re normally simpler, more Japanese-sounding names. They’re different from destroyer ships and warships in that their names are fairly simple. It’s like a military rule.
But I thought, “That doesn’t sound very cool,” and I wanted to use the imagery of a whale in the theme of the song, so I thought a submarine fit that concept the best.
But then “submarine” by itself didn’t sound very cool, so I added “Shingei-gata,” or “God Whale-type.” Submarines aren’t normally named like that.

-Did something happen last year?
Andy: Nope.
Everyone: (laugh)
Andy: I did get the flu, haha, but that’s about it.
Wajow: In terms of the band, I want to produce some real results this year. I’ll try my best to make that happen. In personal terms…practice.

-You don’t practice enough?
Wajow: No, it’s not enough.

-What do the other members think?
Andy: I think it’s enough…but if you don’t think it’s enough, then I guess it’s not enough, right?
Jojo: In terms of the band, we’re going to make 3 releases this year starting with “KERBEROS.” Wajow already said this, but I really want to link that to some real results and step up as a band altogether.
I hope that will help us make next year a successful one. I guess that’s my goal.
My personal goals, as always, are to be better at planning and to not hold back anything, anywhere, at any time. Japanese people tend to hold back a lot.
Kaede: My personal goal is to not get in any car accidents. That doesn’t mean I got into one last year, though.
In band terms – I’ve heard rumors that we have a lot of overseas fans. I want you to call us in a bigger voice. I’d really like to release something overseas. We’re waiting for offers from CD makers.

-If you could go overseas—whether personally or as a band—where would you like to go?
Kaede: I want to go to Ireland. I love the Cranberries, and I like the buildings. I love the scenery of places like Dublin.

-How about the beer?
Kaede: I only drink Guinness.
Andy: I want to go anywhere, if we can go somewhere.

-Have you ever been outside of Japan?
Andy: No, never.
Kaede: I went to Los Angeles once.
Wajow: I’ve done a lot of traveling with my family. I’ve been to China, Turkey, Guam, Bali…but I’d also like to visit anywhere.
Jojo: I want to go anywhere that it’s possible for us to go, but I really want to go to the U.K. A lot of our roots are in punk rock – in terms of music and in terms of fashion. I can only think of good things when I think of the U.K.
Nov: I want to go to San Francisco. I’m a fan of Full House, so I’d like to see what it’s like.

-By the way, are any of the members good at English?
Kaede: No, not at all.
Andy: I’ll study.
Kaede: I dropped out of high school!

-THE GALLO lives are pretty unique, but what is it about your shows that you like?
Jojo: We took a break from shows for around 3 months. Before that, we took our music and our shows for granted. When we finally got back to the stage, we realized how important our concerts are. What you experience there is totally different from everyday life. It’s far more interesting.
The stage is where we let out a lot of emotions. That’s probably the main reason we can’t quit. It’s our way of life.
We’ve thought about quitting music before, but that’s why we won’t.
I’m really happy that people think our lives are unique. I know that, too.
I can say with confidence that THE GALLO is different from other bands. I want our overseas fans to see that.

-Why do fans carry plates and spoons to your live shows?
Jojo: So we can eat their dreams. We eat all things like dreams, sadness, and pain. We make fans set the table so we can eat them.

-Finally, please give a message to your fans and the readers at S-T.net.
Nov: I’ve personally never been overseas, but I’m really interested in going. If you call us with all of our power, maybe we can go.
Kaede: People from San Francisco? (laughs)
Nov: Yes. (laughs) Our music will be available on iTunes, so you can listen to us. Maybe THE GALLO will visit your town someday. I hope we can.
Andy: I hope you learn more about THE GALLO from this interview. I hope it makes you more interested in us. It would make us happy if it did.
Kaede: I really want you to call us over to your country. We can’t get anywhere by just saying, “We want to go overseas.” I want to have a CD signing event over there.
Wajow: Hello readers. Whether you just learned about THE GALLO from reading this or whether you’re a long-time fan – I’ll try my best, and I’d be happy if you came to see us, so let’s try our best together!
Jojo: I want to go overseas, but we’ll only go if we have a good event organizer and a secure contract. We won’t go if we don’t feel good about it. We’re not used to how things work overseas. We look a bit scary with all of the makeup we wear, but that’s even scarier for us. (laughs) If you can make us a good offer, we’ll go over there.

Like Nov said, “KERBEROS” will be available on iTunes starting March 7. That’s a full week ahead of the CD release!

The band will also celebrate their 9th anniversary on May 4th with a show at Ikebukuro CYBER. Tickets cost 3,500 yen in advance and 4,000 yen on the day of the event. Get more info on THE GALLO’s homepage. It will be an all-night event, so wear comfortable shoes!