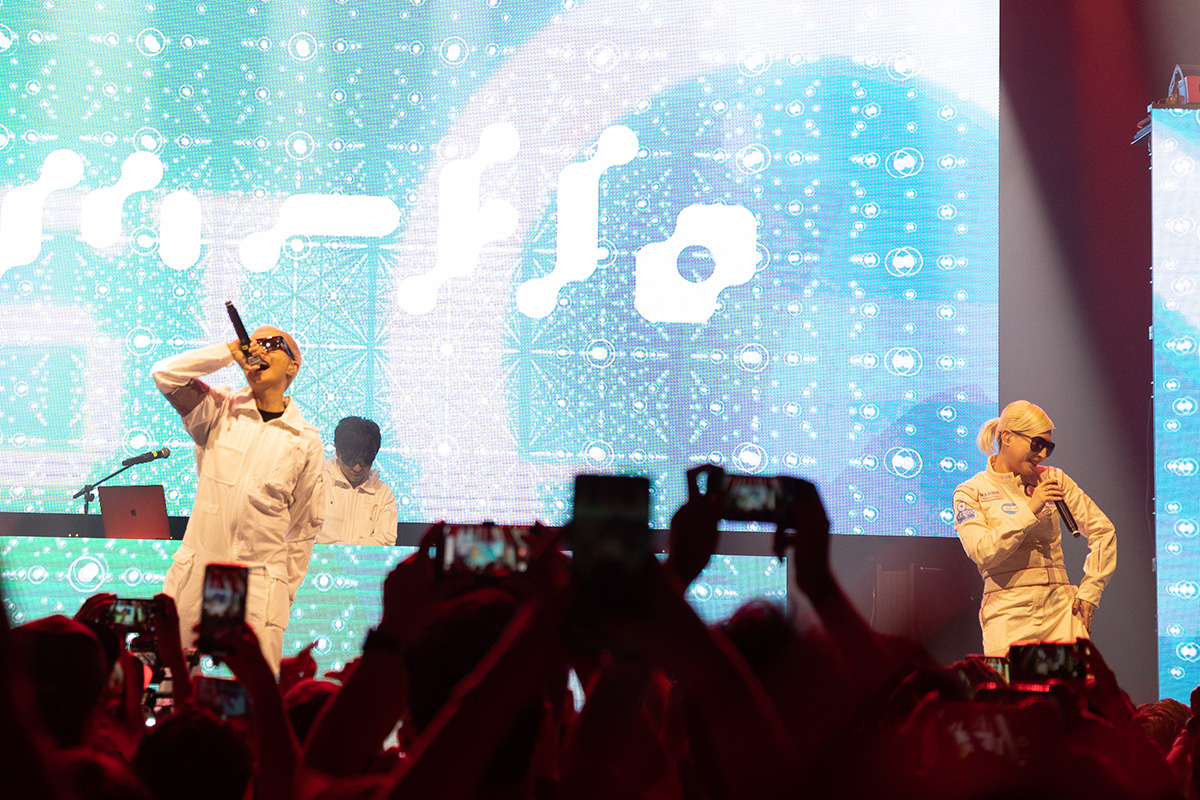 Last Wednesday, m-flo’s DJ Taku Takahashi walked out on stage to welcome the hyped-up crowd to the Novo for OTAQUEST’s return to L.A. after last year’s inaugural event at the neighboring Microsoft Theater. Looking totally low-key in a T-shirt and basketball shorts, his tone chill as always, you could still see his boyish grin all the way in the rear seats of the balcony — it’s the look you see on a guy who’s picked out a really cool gift and can’t wait for you to open it. 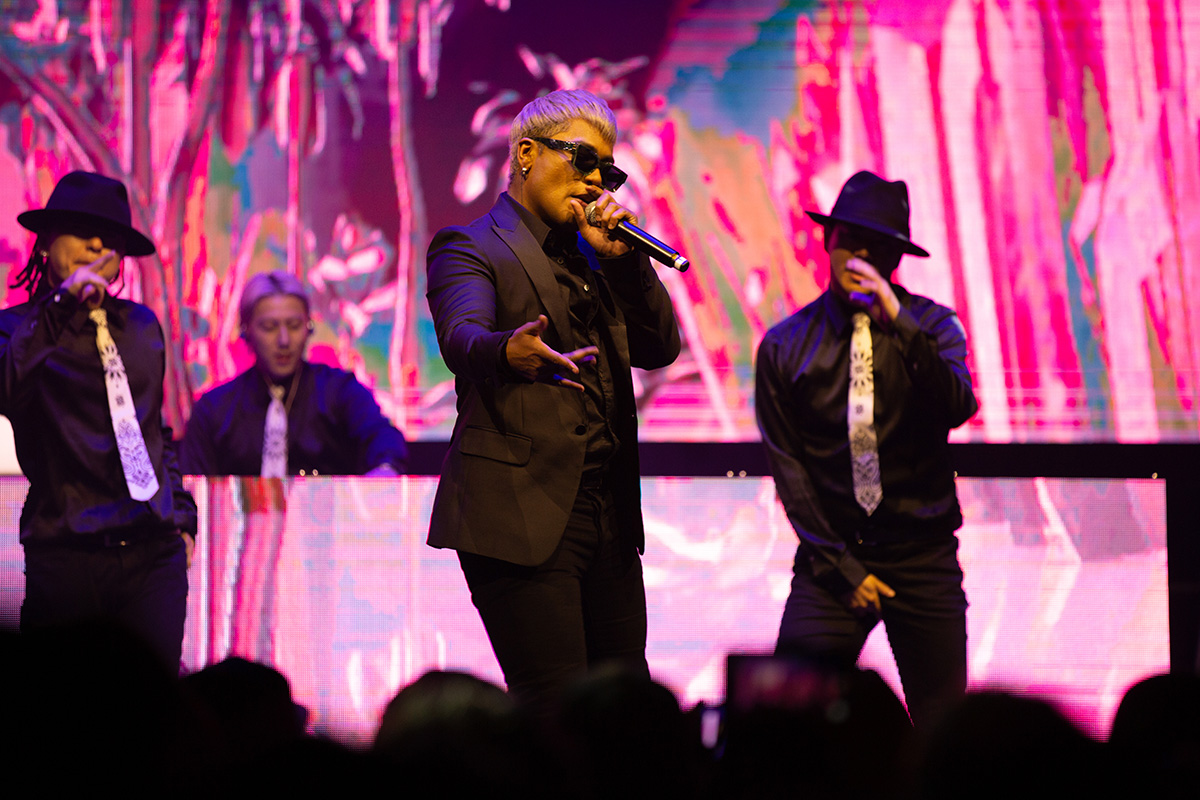 CrazyBoy
Besides a change in venue, OTAQUEST 2019 featured a streamlined artist roster and a mix of new and returning artists. Leading off with CrazyBoy (from J Soul Brothers III from EXILE TRIBE), the night kicked into the Tokyo club experience right away with hot bass tracks and laser-sharp choreography from the hip-hop artist and his four backup dancers. Aggressive and charismatic, CrazyBoy saved the best dance moves for last, with detailed, complicated footwork on the dance floor jam “LOCO”.

Hiroomi Tosaka
Hiroomi Tosaka (another solo artist from J Soul Brothers III from EXILE TRIBE) brought a different flavor to the stage — more “soul” compared to CrazyBoy’s “street”. His smooth vocals on “SUPERMOON” and a cool extended dance break in “Chain Breaker” won over a lot of new fans. 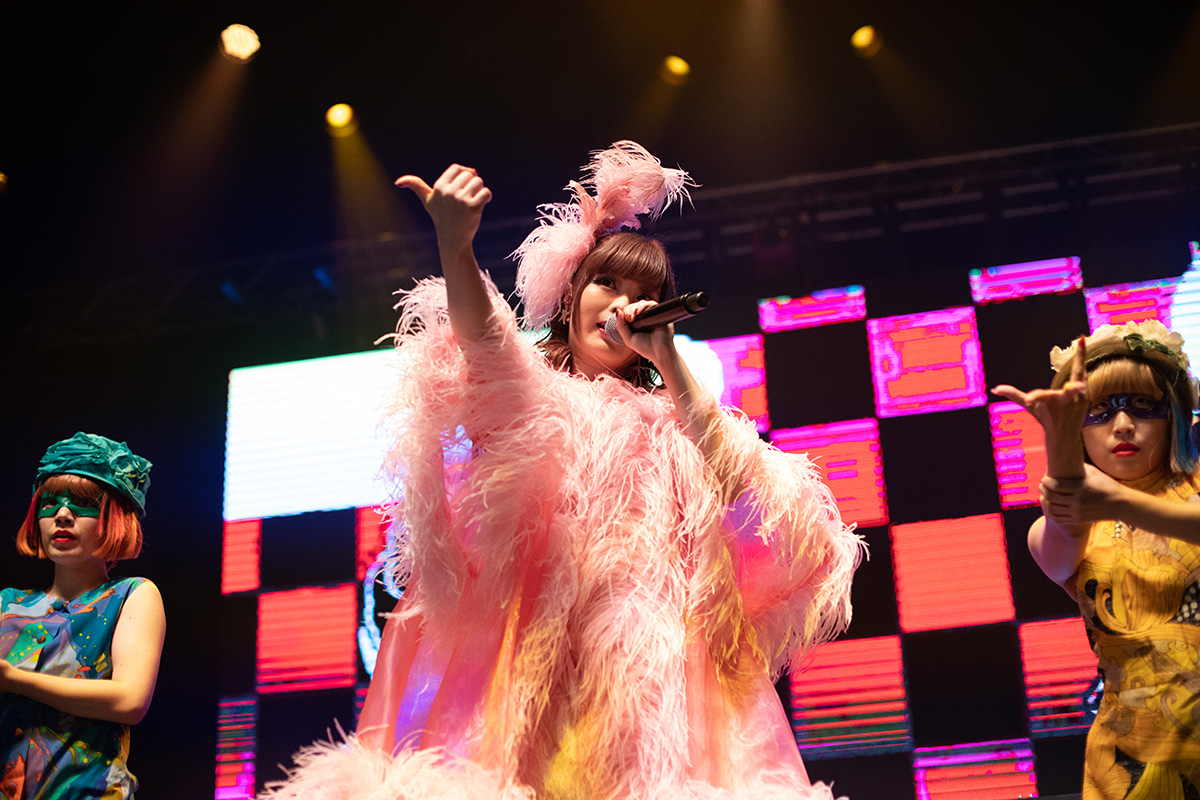 KYARY PAMYU PAMYU
No stranger to Los Angeles, and easily the most internationally recognizable artist of the night’s lineup, Kyary Pamyu Pamyu stepped onto her first OTAQUEST stage greeted by a powerful,thunderous roar from the crowd.

Backed by four candy-colored dancers, she started her set with “Ninja Re Bang Bang”, dancing in sync with the animated robot on the jumbo screen above the stage, throwing invisible shuriken at the adoring crowd. There’s a lot going on when Kyary takes the stage, but she pulls it off –- her performance is the perfect fusion of kawaii Harajuku fashion and music, and the night’s setlist (including “Fashion Monster”, “Harajuku Iyahoi”, and “Candy Candy”) was a joyous collection of hits for new and old fans alike. 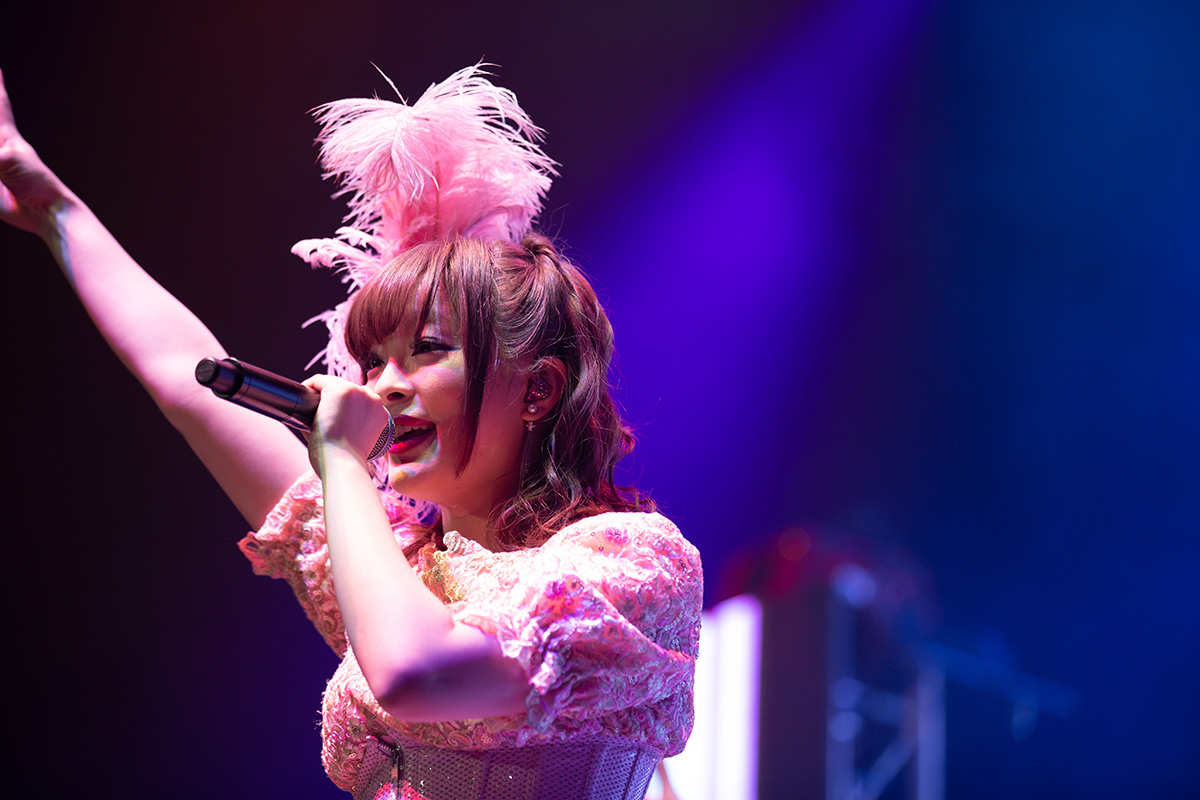 Kyary’s commanding stage presence is all the more impressive considering her small stature and even tinier voice when she tells the audience “Everybody jump! Jump! Jump!” The crowd stayed glued to her every move, and even the slightest wink or smile got a huge reaction. Kyary’s set had one of the most explosive moments of the whole night when a sudden arsenal of light sticks came out instantaneously to cover the auditorium at the start of “Fashion Monster” — the Novo was just in love with this performer.

As her time was ending, people chanted, “KPP! KPP!” She fondly laughed and commented, “Next song [is the] last song -– I’m sad,” but she ended on a happy note with “PON PON PON”, putting the cherry on top of her short but decadently sweet set. 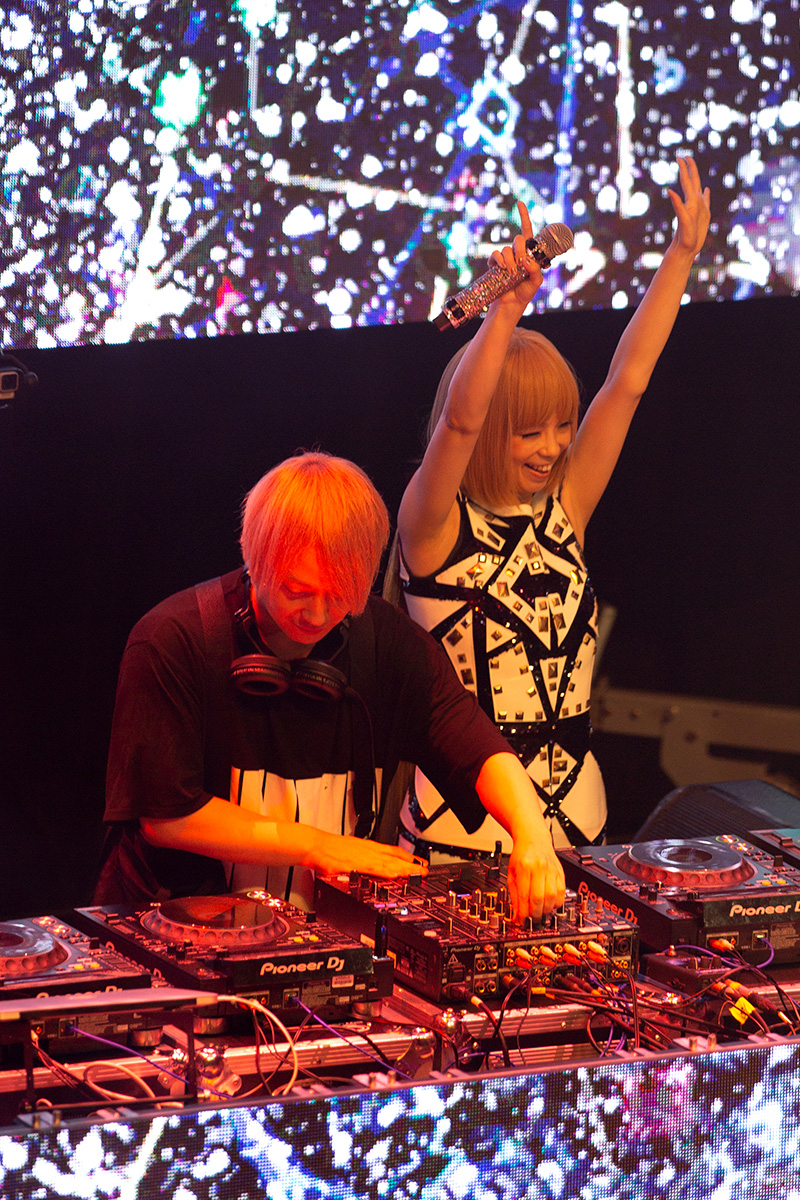 CAPSULE
Dance and electronic duo CAPSULE gave their first U.S. performance at OTAQUEST 2019. Producer and DJ Yasutaka Nakata and vocalist Toshiko Koshijima got a full-house standing ovation as their set began, and programming CAPSULE back-to-back with Kyary Pamyu Pamyu was a divinely-inspired move.

CAPSULE’s last album was released in 2015, and even though their setlist brought songs from as far back as 2007 (“FLASH BACK”, “Starry Sky”), not once did they sound dated — a testament to Nakata’s skill as a sonic composer (also seen in his work as producer for Perfume and Kyary Pamyu Pamyu). His attention to detail shined during CAPSULE’s set with the way he weaved the songs together with precision — beats and melodies sweeped in and out so naturally (“Hero” going into “World of Fantasy”), like they were always meant to be connected. Nakata crafts his buildup with a smooth ascent to mind-bending bliss, making the smallest changes to tempo and pitch throughout, and the bass drops at the exact second you need it to. 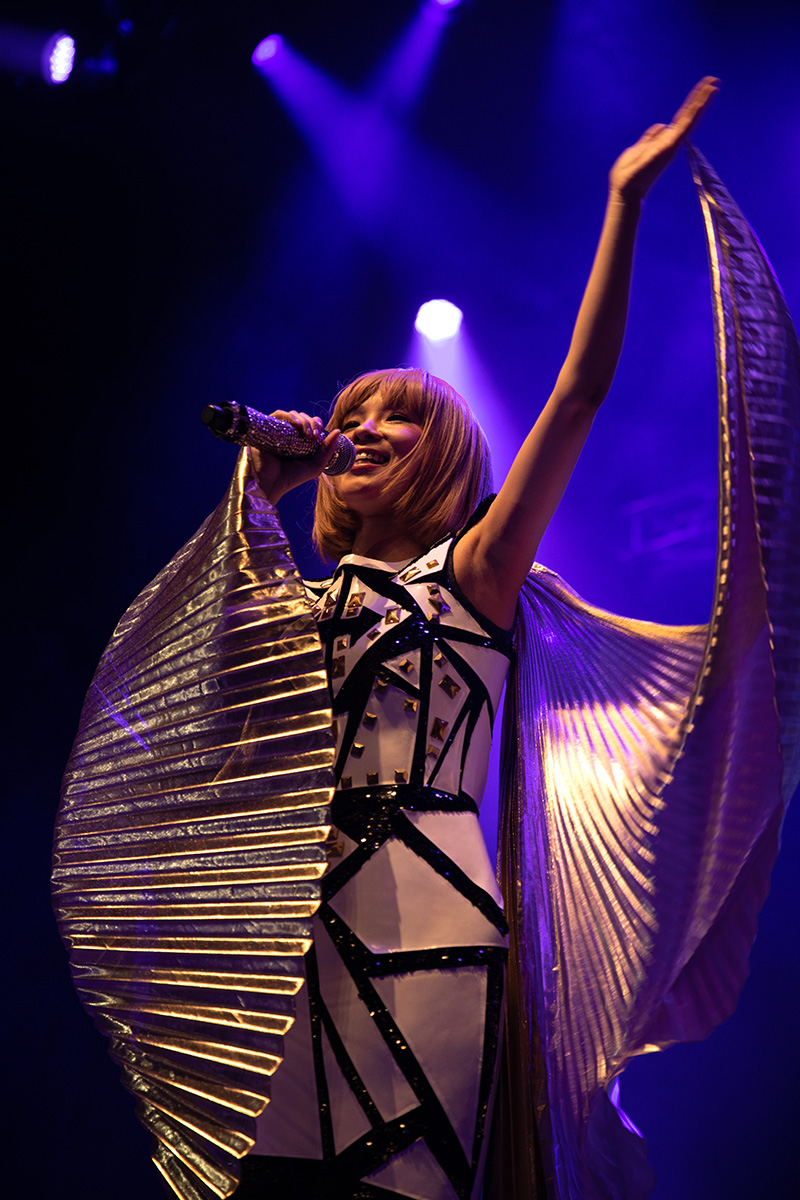 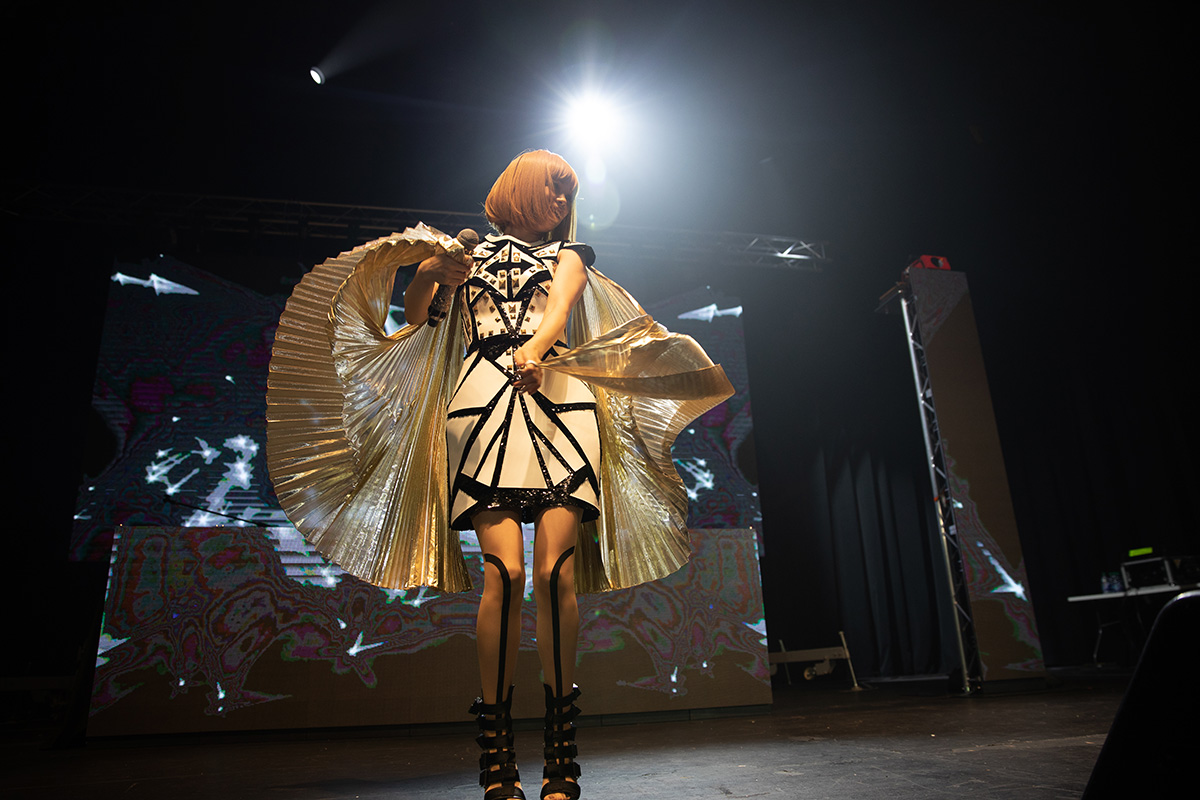 Koshijima looked fabulous — her white geometric dress accented with black lines and gold cape added “Egyptian Goddess” style to her already perfectly-timed poses. She whipped her short blonde bob back and forth with gleeful abandon on “JUMPER”, and weaved her siren-like vocals through “World of Fantasy” with elegant ease. The galactic lighting added even more surreal ambience, transporting the audience to the Tokyo club they all wanted to visit with CAPSULE right now.

Fans of all ages, grandpas and teenagers, male and female, were jumping around non-stop for this group, and dancing just felt natural. Despite their set being only six songs long, it felt like the solid, complete CAPSULE experience that many were hoping for. 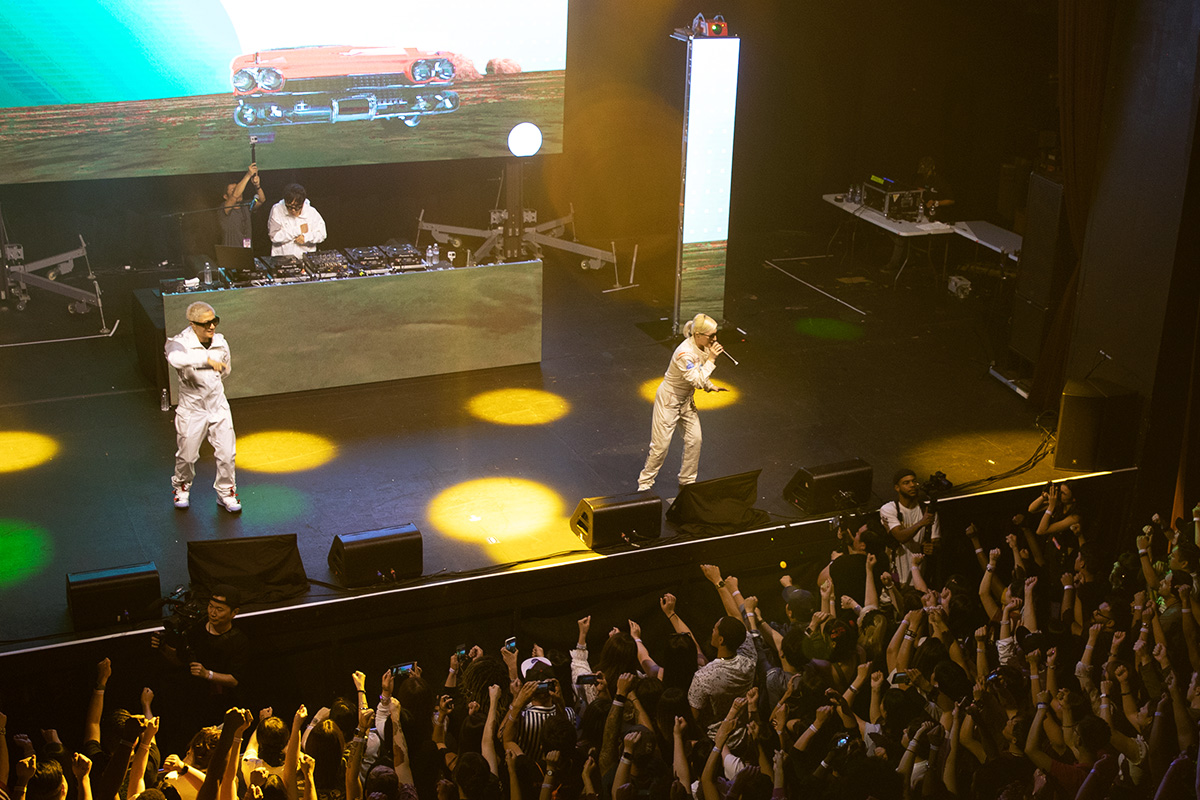 m-flo
OTAQUEST 2019 headliners m-flo had just released their latest EP, Mortal Portal, the same day in Japan, but here they were celebrating the release with fans in America at OTAQUEST.

Truly humble and appreciative, VERBAL said of last year’s OTAQUEST that they were “blown away that people knew the Japanese lyrics” to their songs. L.A. must have made the right impression last year, because m-flo brought the heat back full force for this year’s set, reaching deep to open with 2001’s “Come Again” and even further back for 2000’s “How You Like Me Now”. 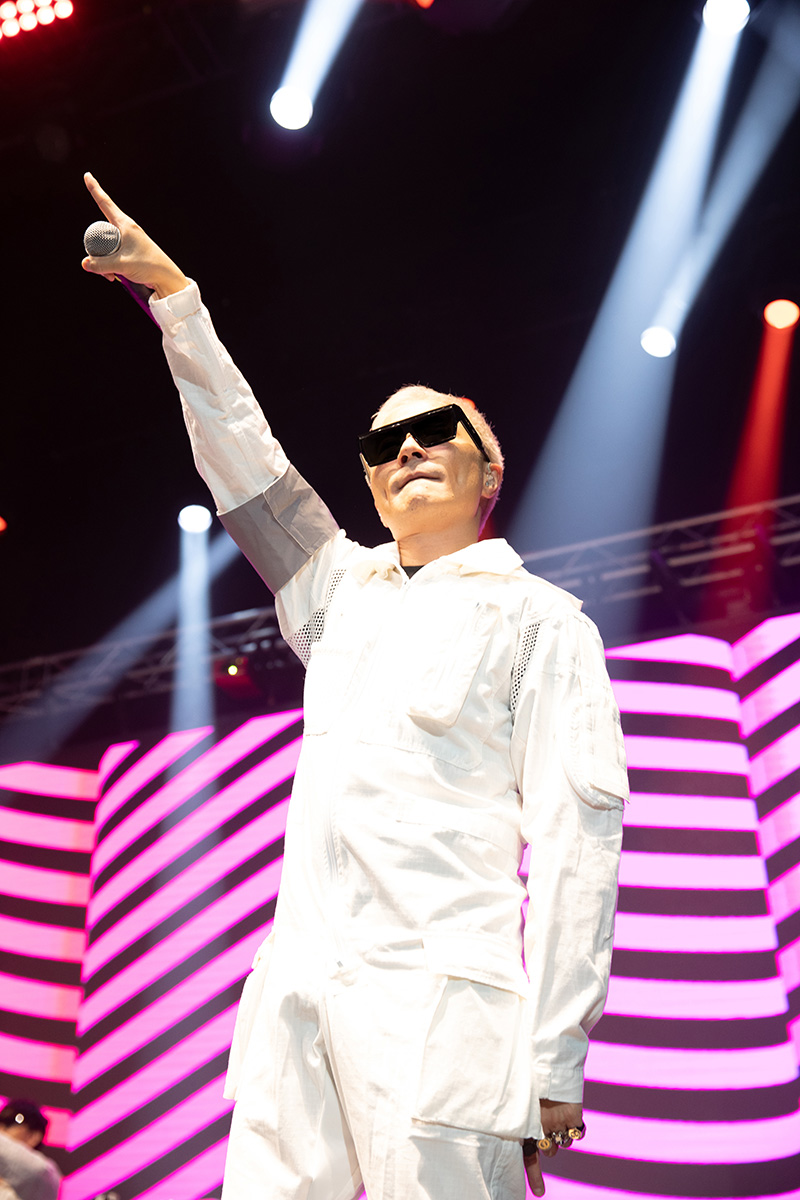 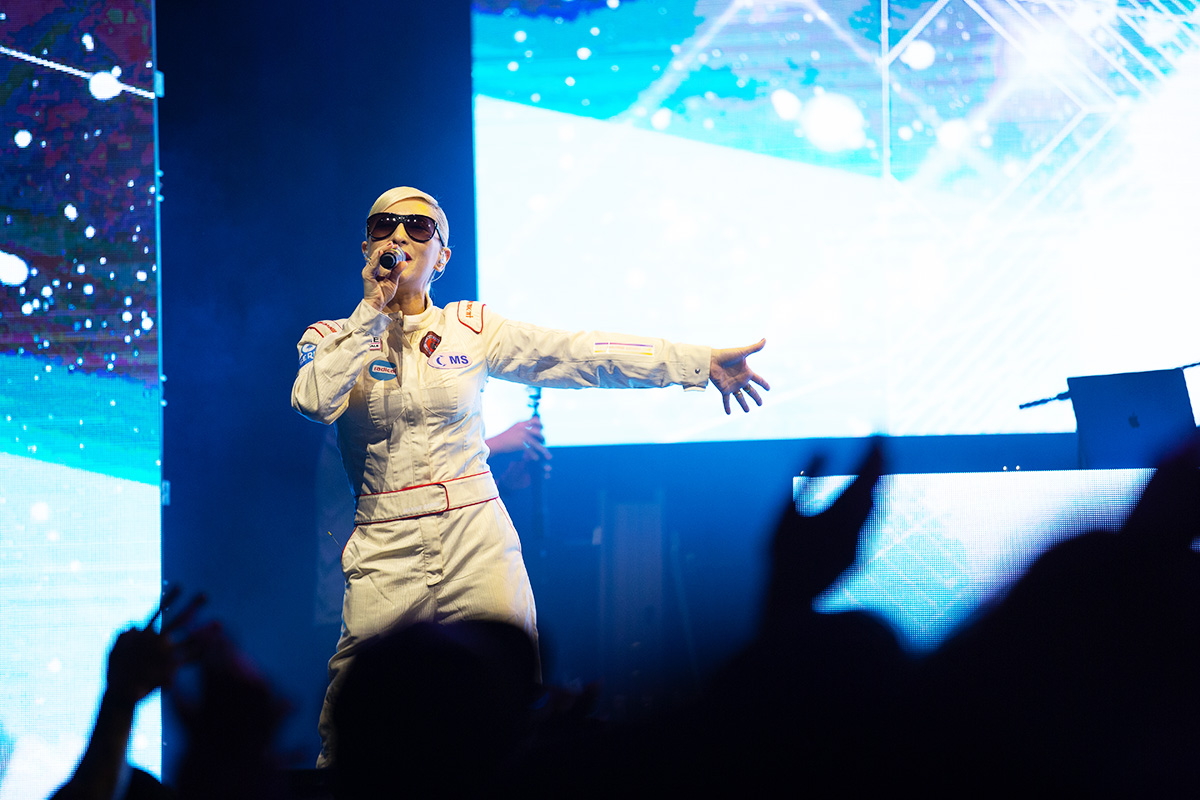 The performance of “STRSTRK” was hypnotic, with LISA’s lead vocal and Taku’s haunting beat setting the stage for VERBAL’s mid-song rap. Compared to the abstract visuals of the music video, the live performance of this song carried a lot more power stripped down to just this trio of powerhouse performers on stage. The bass pushing out of the speakers in that dark theater was taking no prisoners.

On top of Taku’s expertly-orchestrated grooves, VERBAL and LISA’s vocal counterpoint is m-flo’s most visible strength, and their dynamic on-stage give-and-take is almost a full comedy act by itself. As an international act, they have the advantage of connecting to audiences in fluent English, and they’re such pros that they can lock on to the vibe of a live crowd and hold them near effortlessly. m-flo came to L.A. to bring us a party.

LISA stepped off during “gET oN!” for Taku and VERBAL to do a short but hyped-up mini-set. Coming back a few minutes later, she joked that she’d considered walking down to just talk with the audience and have a drink during the break. “She would really do that, you know,” VERBAL confirmed. It was one of many cute, warm moments m-flo shared with the audience. With so many hits to their career and intensely loyal overseas fans, m-flo still went out of their way to make the Novo crowd feel like family.

m-flo trusted the night’s positive vibe so much that the audience got a special surprise: “You guys ready for some new joints?” VERBAL asked. “This is a teaser, they’re not even arranged properly,” he laughed, “…not even a title.” We got to experience the heavy beats and VERBAL’s speed-rap in “funkdafied”, and “Sweet but deadly” is a steel-drum “summer jam” featuring DJ Taku on the mic(!).

LISA’s voice sounded superbly confident and strong in the group’s newest song, “EKTO”, and the set closed strong with “No Question -TOKYO RAINBOW PRIDE REMIX-“, the revamp of the hit track that launched “m-flo 3.0” last year.

With props to last year’s event, OTAQUEST 2019 at the Novo upped the bar significantly from 2018, largely in part to the venue’s open area giving people the room to get up on their feet and jam freely with the music. Loaded with star power, perfectly paced, this was a landmark event for J-Pop in the U.S. — let’s do this again real soon.

Dazed Digital: Why Kyary Pamyu Pamyu is the Star of Tomorrow