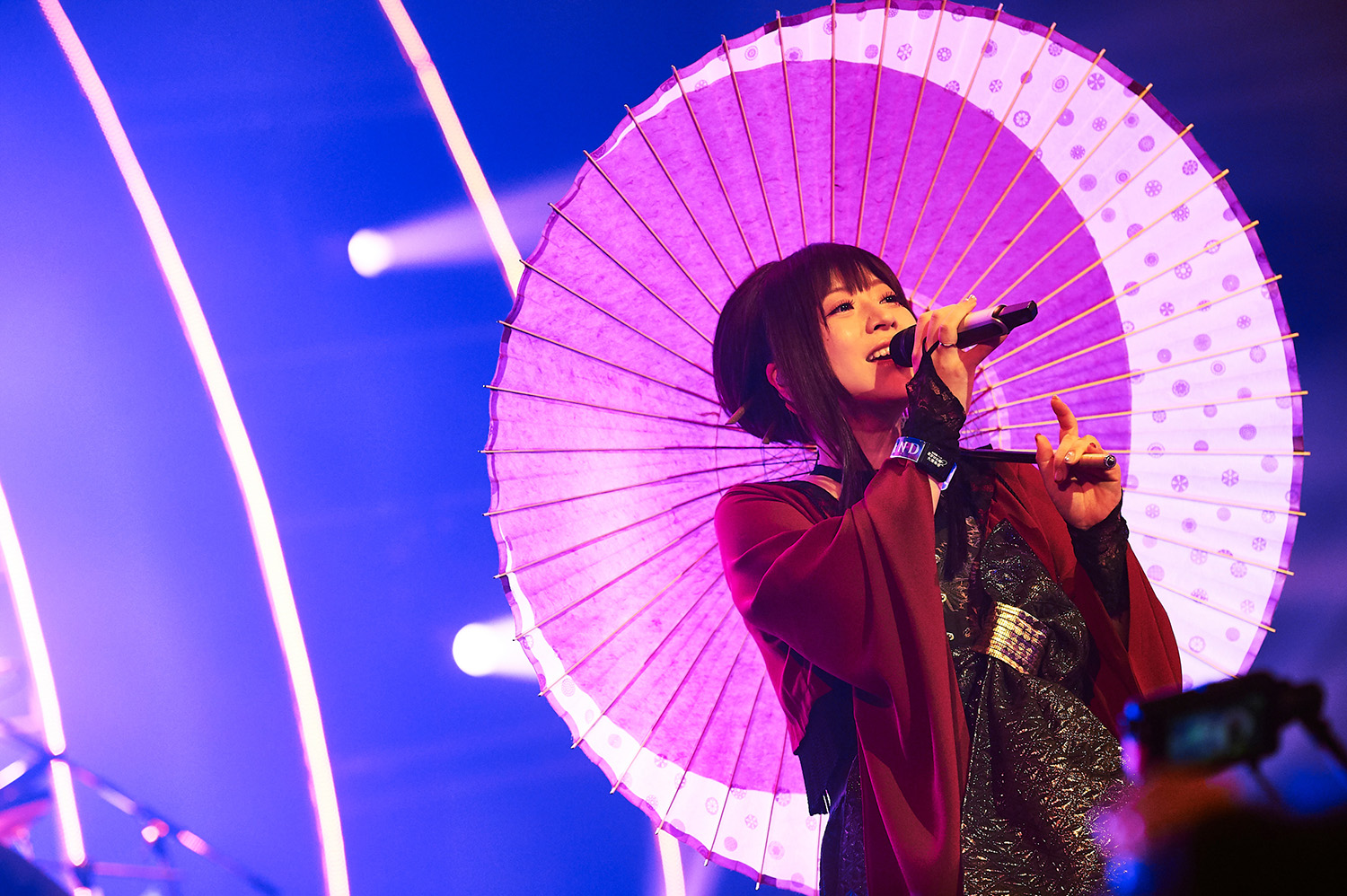 No one covers vocaloid songs quite like WagakkiBand, and I mean that in the best possible way. To celebrate their eighth anniversary, they released a new vocaloid cover album Vocalo Zanmai 2, a shout out to their roots when they released their debut vocaloid album cover Vocalo Zanmai in April 2014. On September 14, 2022, they brought their new creation to life at Nakano Sun Plaza.

“Phony” was dominated by tones of purple, one of the band’s signature colors, and many in the audience waved purple light sticks to the beat. The members were dressed in all black and purple save for vocalist Yuko Suzuhana, who wore a red and black dress inspired by the obi of kimono. The concert was easy to follow since the lyrics for all of the songs were displayed on a screen in the back. 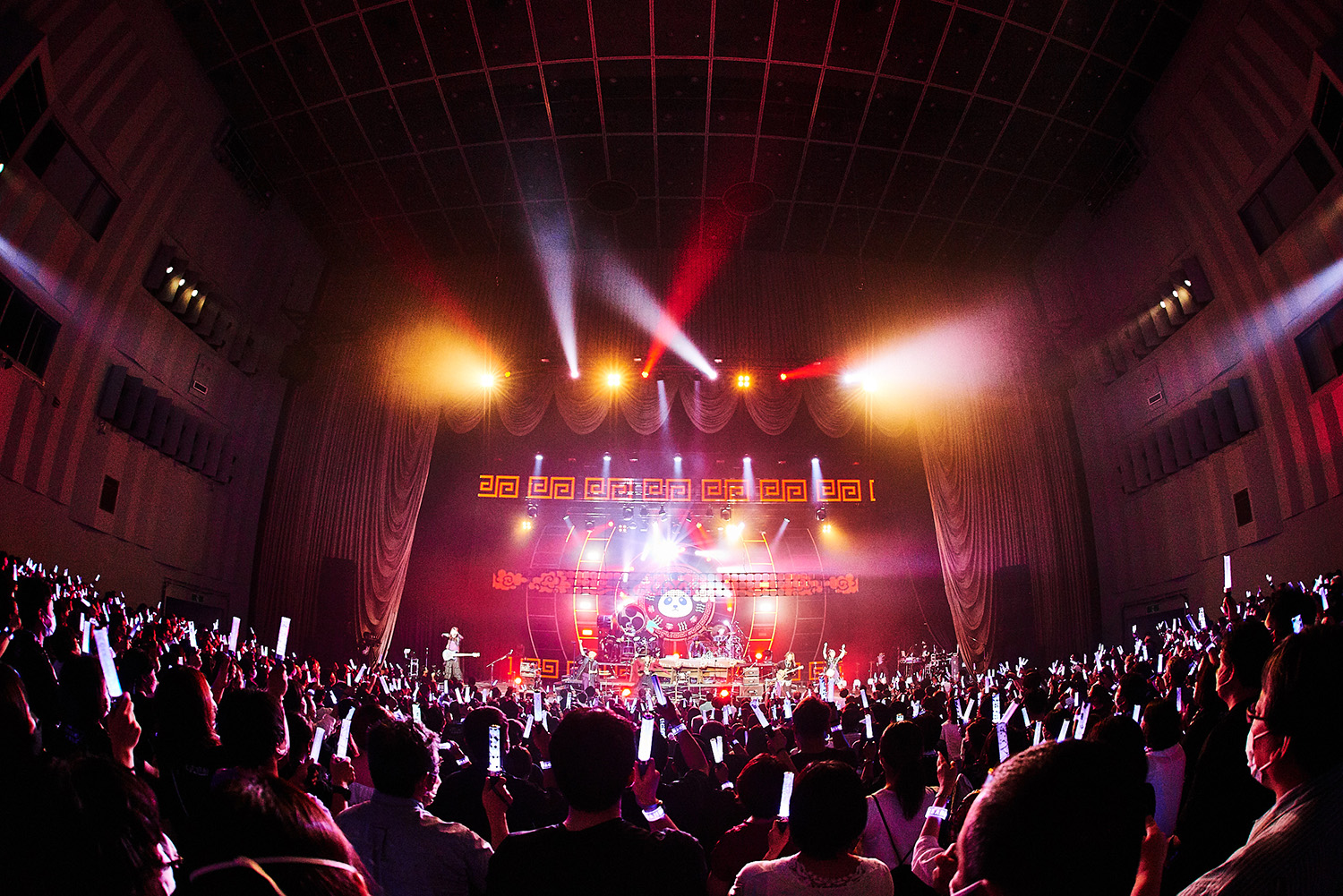 The pace picked up in the next song, “EgoRock”. Bassist Asa brought a rock feel to the stage by playing and moving around the stage expressively and interacting with the audience. In the following song, “Surges”, traditional Japanese-inspired sounds like shakuhachi notes dominated the instrumentals, and Machiya joined in on background vocals. With the fast and catchy vocals, it was impossible to turn away from the stage and the lyrics on the screen.

After a brief emcee where vocalist Yuko talked about how the band is celebrating 8 years as 8 members, they continued their set with a few more catchy songs such as “Identity”, then members Machiya, Asa, and drummer Wasabi performed an instrumental rock tune, “Night of Nights”, to bring a contemporary rock contrast to the and show off their musicianship skills. 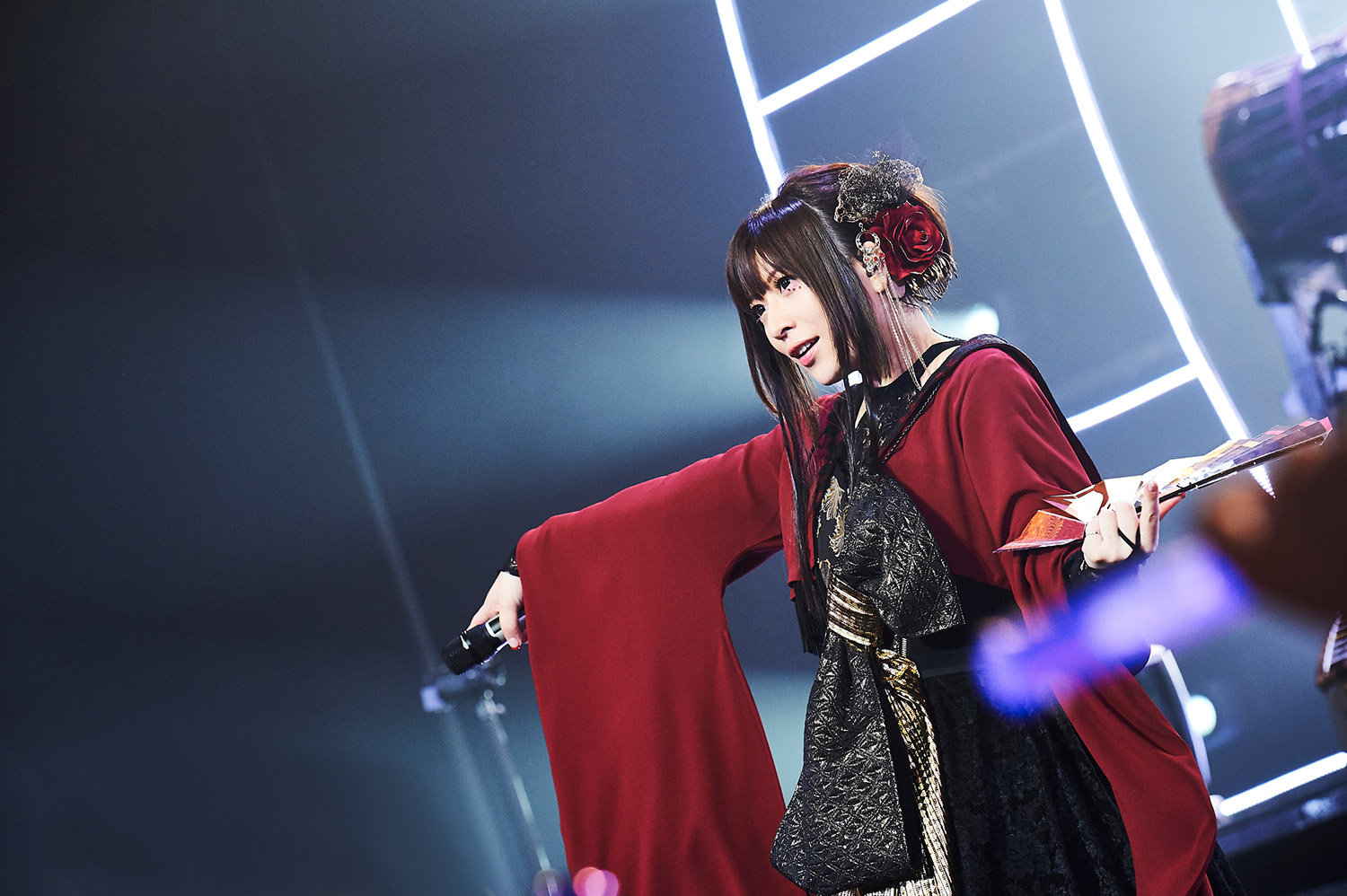 In the band’s second emcee of the night, Yuko announced that the day of the show, September 14, was actually shamisen player Beni Ninagawa’s birthday! It was also Machiya’s birthday the day before, so they certainly had a lot to celebrate.

Following the emcee was “Venom”, another track off Vocalo Zanmai 2. The original track is mainly an instrumental with electric guitars, but in WagakkiBand’s cover, most of it was replaced by Kiyoshi Ibukuro’s koto and Daisuke’s shakuhachi in a way that didn’t detract at all from the original’s jazzy feel. Machiya also joined in with strong back vocals. 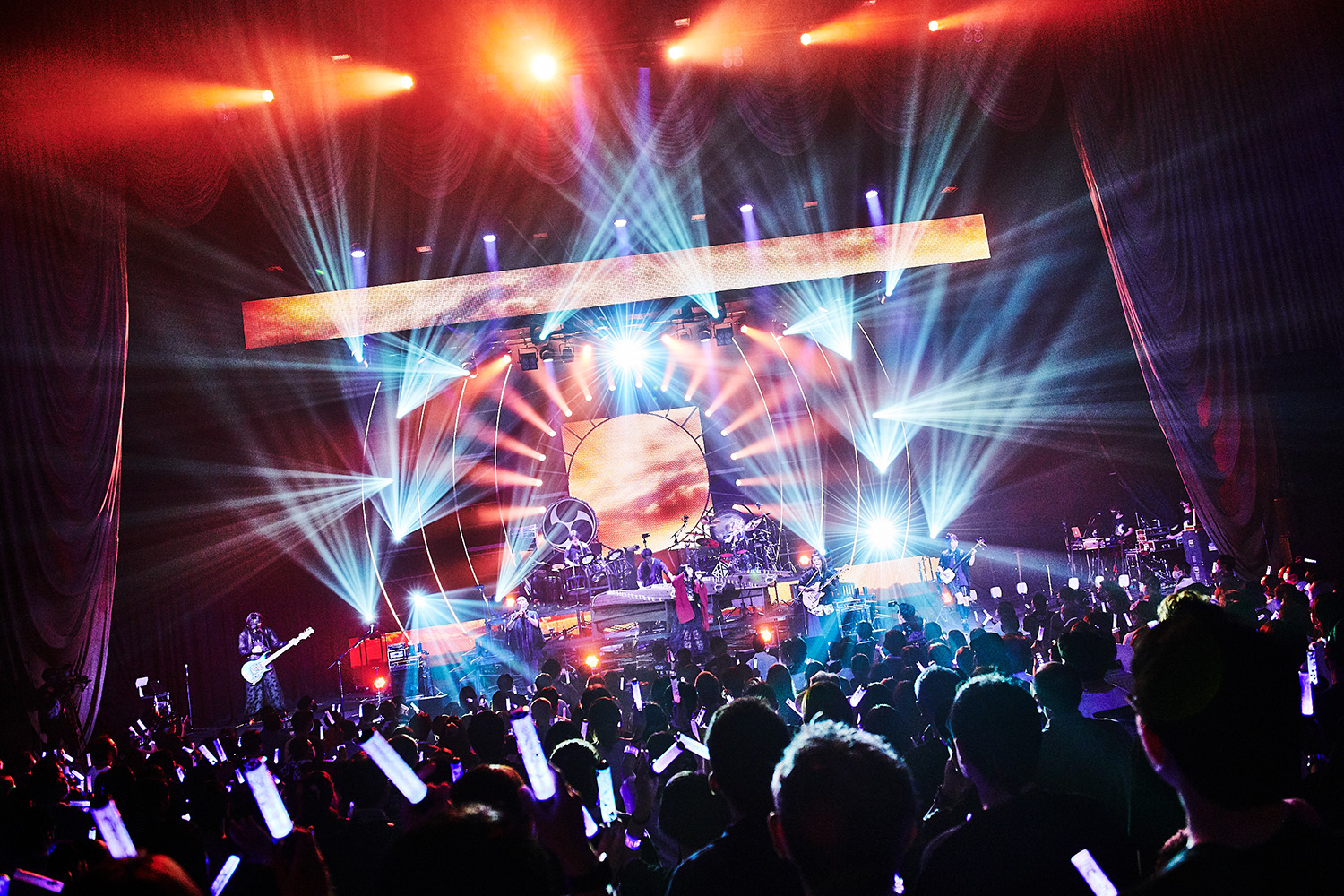 Another highlight of the night was the “Drum Wadaiko Battle”, in which drummer Wasabi and wadaiko player Kurona had a “battle” between their drum sets. At times they echoed the other’s rhythm, at others they played the same beat.

Throughout the set, Kurona punctuated the beats with traditional vocalizations that wadaiko drummers say while they play. The band treated the audience to a rare occasion in Japanese concerts: the audience was allowed to film the track “Chimera”, though many chose to go without and wave their lightsticks instead. WagakkiBand closed their set with the ballad “Fire Flower”, which featured many graphics of fireworks. 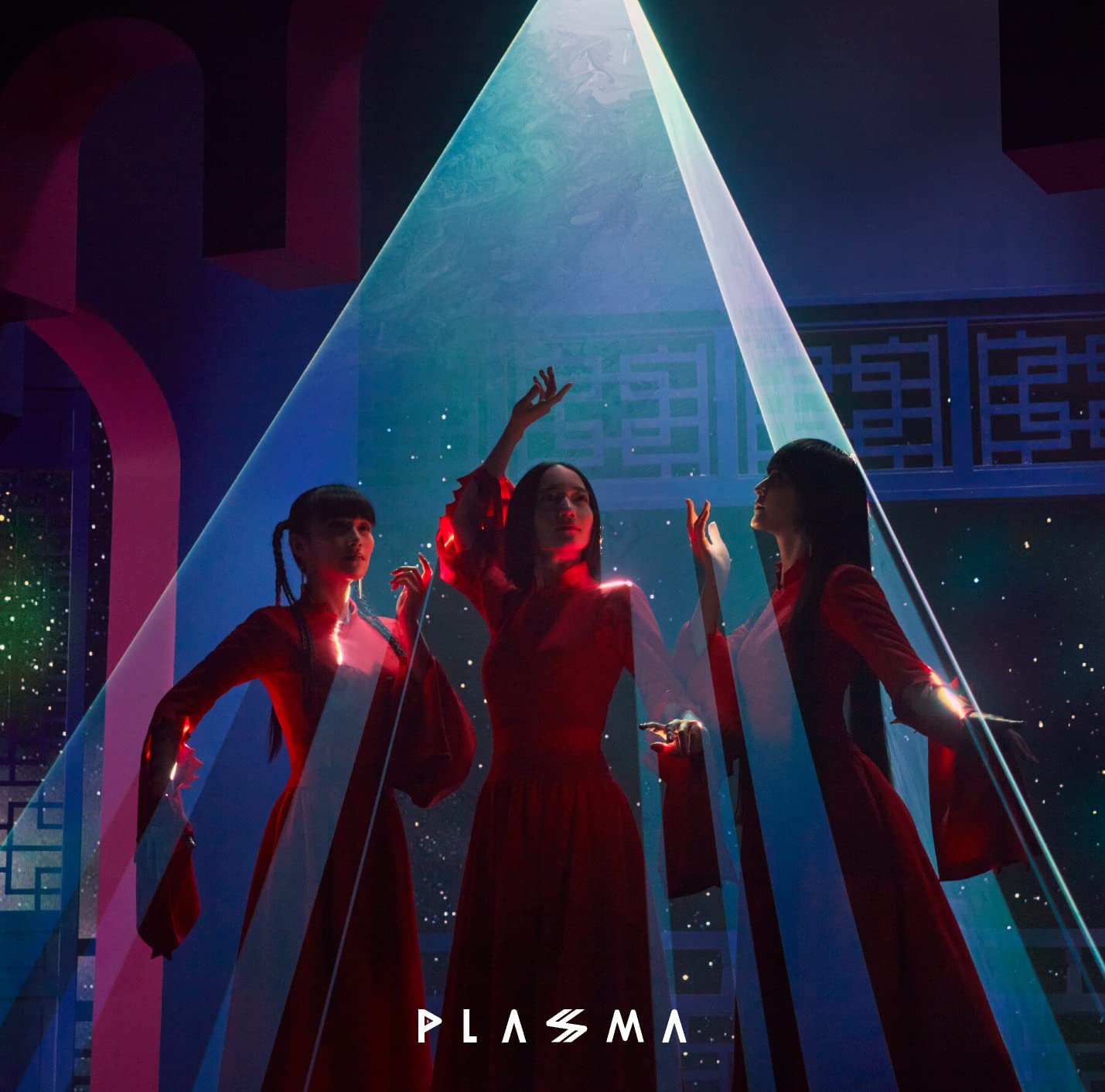